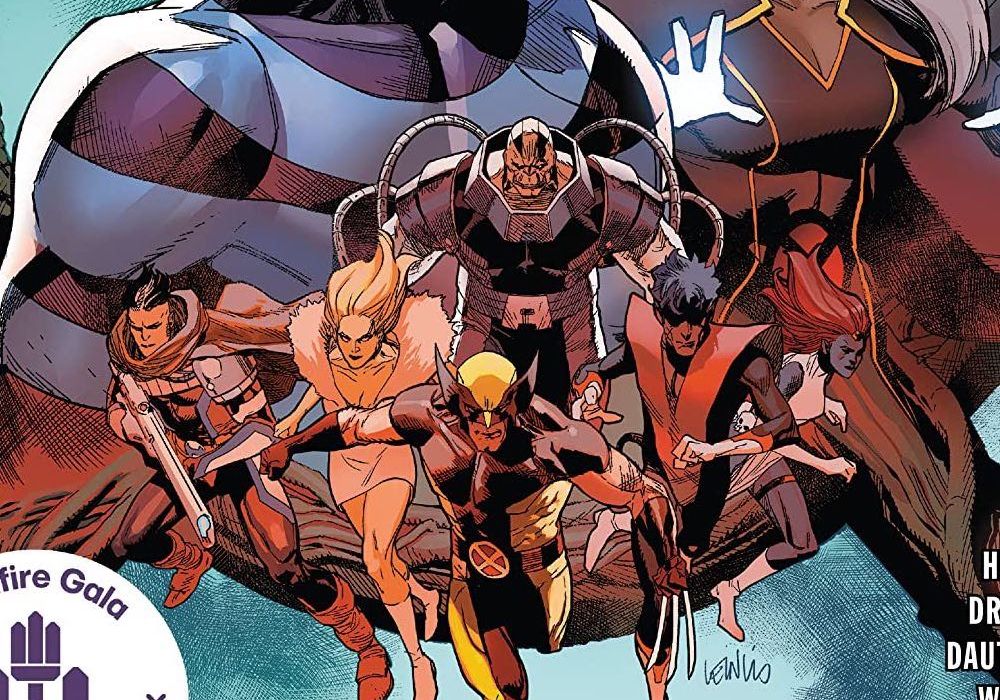 We’re at the end of an era in the Krakoa-based X-Men comic book franchise. Jonathan Hickman is writing his last installment of the main “X-Men” title along with a superstar roster of artists including Nick Dragotta, Russell Dauterman, Lucas Werneck, Sara Pichelli, Frank Martin, Matthew Wilson, Sunny Gho, Nolan Woodard, VC’s Clayton Cowles, and Tom Muller. Marvel is about to unveil their official team of “X-Men” starring in their own title next month of the same name. Will the first “X-Men” Krakoa-era ongoing series in The Marvel Universe conclude with a bang that leads readers to upcoming crossovers with glee or confusion? Do Jonathan Hickman and all the interior artists find a way to make the obtuse structure of the series work to their benefit? Find out and check in on what happened at the Hellfire Gala in our review of “X-Men” #21. 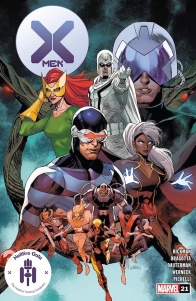 THE HEROES OF KRAKOA DEBUT!
It’s a changing of the guard as the first X-Men team of Krakoa debuts! One era ends as a new one begins, and the handoff happens here.

“X-Men” #21 shows readers that Jonathan Hickman’s humor and characterization can be just as strong as his in-depth plots. The opening exchange between Namor and Jamie Madrox carries a touch of dark humor and kicks off the plot of the issue with an impressive sense of scope. Hickman’s creative relationship with artist Nick Dragotta is impressive. Dragotta is able to meld that sinister and irreverent tone Hickman is going for with ease. Dragotta’s figures are so expressive. Namor’s anger is vividly captured here when he rolls his eyes, dodges eye contact, and downright insults the “X-Men.” This brief scene deconstructs the characters in it and shows readers just how much incredible subtext is lurking beneath the surface of the issue.

Russell Dauterman’s interiors are stunningly beautiful. Dauterman expands on the amazing variant cover series by lending a few interior pages to “X-Men” #21. The level of detail in the costumes as seen in the variant covers is staggering. Characters have costumes that recall aspects of their personality or power set. The colors behind many Hellfire Gala costumes bring out the ’90s color set. Xavier and Magneto’s designs are so bright they look sinister. Dauterman is great at managing a ton of characters on-panel. Hickman and Dauterman capture incredible moments of celebration when the new team of X-Men is announced. The announcement of the new team makes a for a brilliant sequence. The roster debut is filled with great moments of humor spotlighting the team finding out they are the new X-Men. If you are invested in this franchise this qualifies as a can’t-miss issue.

Artists Lucas Werneck and Sara Pichelli also complement Hickman’s work incredibly well. Pichelli’s art adds a solid likeness to some of the celebrity guests but they still feel tacked onto the issue. In fact, the odd celebrity cameos should serve to date this title going forward. Thankfully nearly every other aspect of the issue is worth praising here. Pichelli’s facial expressions are beautifully vivid. Pichelli’s layouts are also really impressive. One of the best parts of Pichelli’s work here and in other interiors is just how expressive each figure is. Emma Frost has solid facial details and expressions that other artists would likely overlook.

It’s great to get huge sprawling narratives that pay off over a couple of years. Hickman takes a step back to acknowledge how far this continuity has come in the current Krakoa continuity. “X-Men” #21 provides humor, important moments for the “X-Men” and some painfully awkward celebrity cameos. Hickman and company have something bigger on the horizon but there’s plenty of rich X-Men lore and violence provided by other stories. The debut of the brand new X-Men team is a touching moment that provides plenty of humor. None of the artists in this issue stand out as a weak link. Nick Dragotta’s work in particular should be utilized in future X-Men stories. Dragotta’s narrative timing and Hickman’s bleak humor are a match made in heaven.

The one aspect of “X-Men” #21 that is missing is the sense of plot. Hickman is clearly utilizing The Hellfire Gala to tell a story of more consequence but readers haven’t reached very many important plot moments yet. I have a feeling Hickman is closer than ever to the huge plot developments he’s been planning. It is disappointing to consider that recent X-Men crossovers including “X of Swords” have also been light on the plot. I really hope upcoming X-Men stories will focus more strongly on paying off what Hickman has already established instead of introducing more story threads. The promise of the upcoming “Inferno” storyline does appear to have a different direction than other stories.

You have to admire when a long-form story like this current era of X-Men is able to slow down and celebrate characterization. “X-Men” #21 stops to smell the roses and appreciate the huge tapestry of continuity established over the past couple of years at Marvel. Due to the announcement of the upcoming “Inferno” storyline, I’m very happy Marvel decided to conclude the issue with this many artists as well. Thanks to a huge roster of talent, “X-Men” 21 feels more like a celebration than a fill-in to pass the time.

Final Verdict: 8.0 – “X-Men” #21 celebrates the best parts of Krakoa and teases the future of the mutants.