With Marvel and DC both overhauling their mainstream continuities, I take a look at the solid little side book that promises ‘nostalgia’ over ‘new’. 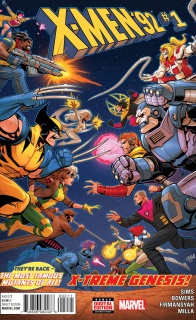 The X-Men of the 90s are back! Continuing from the hit Secret Wars series starring the X-Men of a more EXTREME decade. With Cassandra Nova defeated, the X-Men have taken in all the young mutants she had rounded up and are officially reopening the Xavier School for Gifted Children…but being responsible won’t stop them from having crazy adventures! Especially when Omega Red shows up with the (Formerly) Soviet Super Soldiers!

I’m probably not the only person who found their way to comics through TV. In fact, I imagine that the number of lifelong fans Marvel managed to nab with their ’90s Saturday-morning staples, X-Men and Spider-man: The Animated Series, is probably ludicrously high. However, I’ve matured and developed (a bit, probably) since my days of omnivorously devouring animated pop-culture, and I wasn’t sure that revisiting the bubble-gum coloured world of the squeaky clean ’90s X-Men would be quite as fun, second time around. Turns out, I couldn’t have been more wrong.

Whether you’ve been following this book since it was announced as a “Secret Wars” tie-in or if this is your first issue, this newly branded #1 doesn’t disappoint. Bowers and Sims manage to cover the previous trials the X-Men faced with a few carefully placed lines, before barrelling headlong into their next saga.

In the wake of Cassandra Nova’s sentinel manipulation and the X-Men’s recovery, Professor X has thrown the doors of the school open for even more students, and it’s great to see the Westchester Mansion’s halls buzzing with life and packed with familiar faces. However, things never stay quiet on the mutant front for long. A visit from a shady ally from Wolverine’s past, coupled with a Russian mutant kill-squad headed up by Omega Red, drags the X-Men out of their comfort zone and into the desolate wastelands of Siberia.

Bowers and Sims are clearly having a lot of fun with this book, and the banter and chit-chat from the staff and student body in the opening pages is a joy to read. There’s an irreverence that plays throughout this title that makes it clear it doesn’t take itself too seriously (Wolverine and Jubilee in-line skating through the mansion might be the most ’90s sequence you’ll see all year) but it all feels consistent, contained, and coherent with the tone of the issue.

What’s more, they’re able to balance a fully stocked outing of X-Men across their script, ensuring that Beast, the Professor, Storm, Wolverine, Jubilee, Bishop, Rogue, and Psylocke all get a crack of the conversational whip without the book feeling crowded. Alongside this, there are mutants as varied as Monet St. Croix, Chamber, and even a teenage Doop, backing up the secondary cast and providing a host of voices that feel well-researched and natural.

This smorgasbord of familiar faces must have been a challenge for Alti Firmansyah, a newcomer to the book, but her expressive, cartoonish style slots in perfectly with the light tone and humorously earnest characters. Throughout the first half of the book she juggles panels packed full of characters from every generation of the X-Men and manages to keep them individual and interesting.

As this issue’s antagonists rear their heads, Firmansyah offers up an energetic, panel-spilling fight scene that feels like it could’ve been lifted straight from a manga. The tussle in this issue is relatively short-lived, but gives us a glimpse of the team’s varying powers and fight styles, before giving way to an overblown and sinister reveal in the final few pages that is hugely reminiscent of the closing moments of every ’90s cliffhanger episode.

And speaking of cliffhangers, Bowers and Sims deliver a strong one here, offering up two more familiar faces from the X-Men’s rogues gallery and upping the stakes quite considerably in the final few panels. It’s great to see characters getting an airing that have been largely forgotten in the X-Men universe proper. The time-travelling, dimension-hopping teens have amassed a ridiculously varied bunch of villains (as made evident by Nakayama’s killer throwback cover) and I’m looking forward to seeing them reworked and revisited if this creative team is allowed to take some risks in the safe, slightly silly, world of “X-Men ’92”.

I was a little worried when this book was announced that it marked a shameless cash-grab targeting the fuzzy childhood memories all ’90s kids hold so dear. But Bowers, Sims, and Co have managed to mould their little corner of the Marvel universe into something gloriously oxymoronic. “X-Men ’92” is nostalgic in all the right ways, touching on the brightly-coloured memories of youth, but never resting on the goodwill earned by other artists. Instead, it uses the series as a springboard to launch a story all its own, firing past the line for fan-fic and heading instead for a more nuanced homage to a great era for simple comic book storytelling.

Final Verdict:  8.0- Whether you’re a #90sKid or just a fan of fun-filled comic stories, this book shows that, sometimes, the oldies are the goodies.