What’s this? Storm, Wolverine and the rest of the Merry Mutants are helping out their longtime, rockstar friend Lila Cheney? And Agent Brand, an obscure Marvel character and not one, but two real life rock bands are there two. That’s a whole lot of story to get through. This sounds like “X-Men ‘92” to me. 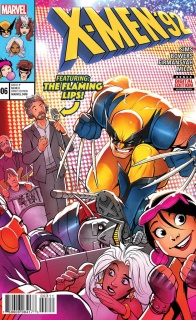 Written by Chad Bowers and Chris Sims
Illustrated by Alti Firmansyah
The X-Men are working security at LILAPALOOZA – Westchester’s biggest festival! But just because they’re security, doesn’t mean they stop being TARGETS! Guest-starring: THE FLAMING LIPS, TOADIES AND LILA CHENEY!

Out of all the one-shots and all the tie-ins that came out of Secret Wars, last year’s mega event at Marvel, “X-Men ‘92” was not only one of the very best, but is now the longest running. I would not have predicted back then, even though the prospect of a comic based on the influential 90’s animated X-Men cartoon really did excite me, getting picked up and being so good. It is such a shame that this title has not had more acclaim, seemingly flying under many fan’s radars. Writers Chad Bowers and Chris Sims have taken many recognisable elements and characters from the modern comics and reintroduced them through the lense of the 90’s animation. So far we’ve seen the introduction of classic X-men heroes and villains like Psylocke, Cassandra Nova and even the entire “Generation X” line up. In issue #6, Sims and Bowers deliver us a fan favourite and an obscure, cult antihero in the shape of Lila Cheney and Death’s Head respectively. The success of this book is built on Bowers’ and Sims’ encyclopedic knowledge of comic book lore and how they utilise it.

This issue also sees Bowers and Sims go full meta-90’s as we are treated to not one, but two obligatory cameos from huge indie rock bands: The Flaming Lips and Toadies. Under the premise of performing at Lila Cheney’s human/mutant rock benefit ‘Lilapalooza’ the bands’ presence provide some good gags and a chance for Sims and Bowers to add some character info we never knew. For instance Beast, as it turns out, is a massive Flaming Lips fan and knows every word to ‘Race For The Prize’. The X-Men are at the event to provide security, which is lucky as a whole mess of trouble turns up looking for Lila. Normally, we would see through this flimsy premise in an instant, but Bowers and Sims are playing up on the simple approach to storytelling that we saw a whole lot of back then. His humour and warmth radiates through his writing, he is so clearly a fan of the source material that he can see its flaws too. What could seem weak and sloppy in the hands of other writers, just feels like an affectionate send up in the pages of “X-Men ‘92”.

Each issue of “X-Men ‘92” can be easily picked up by new readers and #6 is no different. Even with the inclusion of characters like Cheney and Death’s Head, Bowers and Sims keep it bright and breezy, never losing you in his myriad of references. Similarly, the plot moves along at a quick pace, yet it never feels like he skimps on story line. Though if I was to look at this another way, it is fair to say the issue is fairly cramped, with an actual metric ton of characters all vying for space and each page groaning with the sheer amount of action and dialogue. Fortunately, Alti Firmansyah does an admirable job in fitting it all in and for the most part the balance between content and style is spot on. Firmansyah gets to really flex her muscles while playing around with panel structure. Little comedic moments are captured in likewise panels while action scenes and reveals are given a bigger scope. Also, his character designs are so distinct and well thought out that it is impossible to get any of them confused. Everybody is as recognisable as you want them to be, in both look and personality. Storm is resplendent in her all white, 90’s costume while Wolverine is as short, hairy and grumpy as ever. And, if for some reason you are looking for them to break new ground, you have the new 90’s versions of Abigail Brand, Dead Girl and Chamber. Out of these new offerings, the standout for me has to be Firmansyah’s take on Abigail Brand. A heady mix of neoclassical military and 90’s grunge punk meets Emerald City, her look is both in keeping with the 90’s aesthetic and strong enough to transition into the mainstream continuity in my opinion.

As lighthearted as this issue is, storytelling is never ignored. For all the whistles and bells the creative team throw in, it still flows naturally and effortlessly. This is the kind of book you would read on the fly, a nice break from all the longform storytelling you find in most other superhero books. Ultimately, “X-Men ‘92” #6 is an issue that never fails to deliver on its promises. Sims, Bowers and Firmansyah have crafted a bright and colourful romp that is suitably nostalgic while bringing this particular version of the X-Men bang up to date.

Final Verdict: 7.8 – Fun, bright and breezy. An unchallenging book for pretty much everybody.