ResurrXion has begun, and the X-Men have two ongoing teams. This is the one that doesn’t include hidden messages from the artist, which means we can focus on the content of the comic, and see how a story with the young, time-displaced X-Men goes when they don’t have an older member babysitting them. 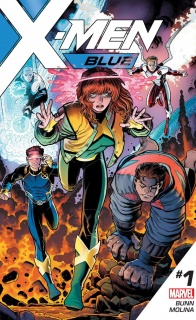 Join MARVEL GIRL, CYCLOPS, BEAST, ICEMAN, and ANGEL as they reclaim the title of X-MEN. After the world-shaking events of IVX, the original five X-Men are here to bring mutant criminals to justice and resort a heroic sheen to their team. But with a new leader in JEAN GREY and a new mentor in their “arch-frenemy” MAGNETO, will old rivalries and new conflicts tear these heroes apart?

Ever since the original five X-Men were brought into the present day, at least one of the X-series comics has been following them, with “X-Men Blue” being the latest. As such, plenty of ground has already been tread, but there have been some new revelations as of late – first and foremost is that they can’t go home again, as time has repaired itself somehow, and there are already versions of themselves back in the past.

Exactly what that means will have to wait, but as someone who loves figuring out the mechanics of time travel, it should be fun to unravel.

Over their runs, quite a few changes have happened to the X-Men. Beast, for whatever reason, has started learning magic (which I will attribute to the “Girl Genius” corollary of Clarke’s Law: “any sufficiently analyzed magic is indistinguishable from science”), Jean’s powers have evolved into psionics, and Iceman is gay. So that’s where we pick things off in “X-Men Blue.”

At this point, the comic views those changes as just parts of the characters now. Sure, Angel has flaming wings he got from space, that’s how it goes in comics. To the comic’s credit, it doesn’t harp on the idea of “Look, it’s the old characters, but different!” although it does have a nice little scene where they talk about what they miss from the past.

“X-Men Blue” also does well in how the team works as a unit, though that shouldn’t be a surprise. Even when they bicker and banter, they’re still a team, and they still know each other. Cullen Bunn has managed to capture each one’s distinct voice nicely, and they all mesh together well. Putting Jean as the leader is a great choice, and she fits the role well. Jean has perhaps gone through the most development after being brought in from the past, and being the leader suits her now.

Conflict-wise, however, it’s not exactly an original foe. Admittedly, when I saw it was Black Tom Cassidy, my first thought was “He’s still alive?” but he’s not at his most interesting in this role; his design is quite nice, though, and the artwork by Jorge Molina makes the most of his Snidely Whiplash mustache, paired with a nice black suit.

More interesting, however, is the appearance of Juggernaut, who’s also undergone something of a redesign. Props again to the artist team for his spectacular entrance, busting through a wall in a full page of awesomeness. Juggernaut’s new look is big, buff, and threatening, combining his classic red armor and bucket helm with a sleeveless black getup that looks pretty damn cool. I’m not sure what purpose the tubes on his head serve, but it still looks pretty neat.

The Juggernaut fight is when things get a bit more interesting; the action looks great, and makes use of everyone’s skills and powers. Every panel Juggernaut appears in makes it clear that he is tough and he is big, just as it should, and he poses enough of a challenge for the “X-Men Blue” comic to be interesting.

Outside of the action, the rest of the comic looks quite nice too. Matt Milla’s color work adds some great shading to the designs, the action is fluid, and the locations all look great. There’s one scene where we see the team fly in over a city at night, and 3/4 of the page is just the art. Yet from the illustrations alone, we can still hear the roar of the ship and the bustle of the city, and feel the tension as the team enters the base, even if we don’t know why yet. It works remarkably well.

Now, I may be among the first to complain about the current X-team lineups being uninspired (in fact, I have multiple times) but Cullen Bunn is working with what he’s got, and he does it well. There’s just enough new and different about these versions of the classic X-Men that we can expect something new, and putting Magneto in the mentor role will certainly make for some good stories down the line.

Speaking of, once more the art team deserves credit for Magneto’s design; his suit still incorporates aspects of the classic design, with red and black color schemes, but includes a bit of purple too. He does still look more than a little bit evil, with the way his eyes seem to glow under the helmet, and a clenched smile on his face; that could mean any number of things, but it’s also something of his default look at this point. Though that does add a more nasty inflection to how his lines are read, even when what he’s saying parallels things Professor Xavier has said in the past.

Overall, “X-Men Blue” #1 is a decent X-comic. The team works well, it knows how to stand out, and the art looks very nice. It’s not the most remarkable of comics, but it works quite well as an introductory issue; there are plenty of X-titles to choose from right now, but this one is still a fine choice.

Final Verdict: 6.7 – A nice start to a new X-Men run, that sets up and establishes the characters, while looking quite good in the process.