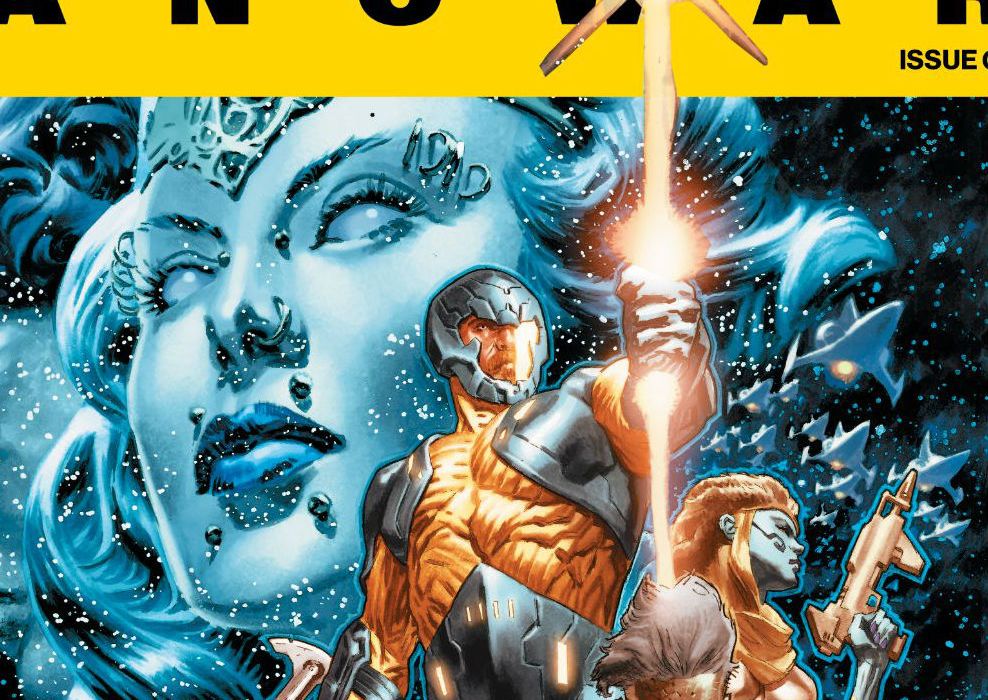 Soldier. General. Emperor. Visgoth. The character that launched the new Valiant Universe returns in a brand new ongoing. Does it open with a bang? Find out in our review. 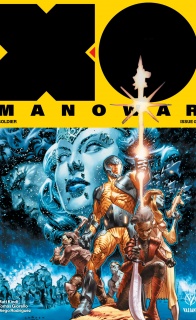 “Born under the oppressive thumb of the Roman Empire, Aric of Dacia learned warfare at an early age. It was amid such violence that he was abducted by an alien race. Forced into slavery, he survived where others perished. His escape would come from bonding with a weapon of immeasurable power: the X-O Manowar armor. With it, he returned to Earth…only to find himself stranded in the modern day. But that was a lifetime ago.

Now, far from home on a strange and primitive new world, Aric has begun a new life. Liberated from his past, he tends to his crops. Free from war. Free from violence. Free from the armor.

But the machinery of death marches his way once again. Conscripted into an alien army and thrown into an unforgiving conflict, the fury inside him finds voice as he is forced to embrace the armor once more. With it, he will decimate armies, topple empires and incite interplanetary warfare as he rises from SOLDIER to GENERAL to EMPEROR to VISIGOTH. They wanted a weapon. He will give them war!”

Before we begin, we have to talk about something. When this series was announced, I have to admit, I had a great deal of reservations. Not that X-O was getting another series. That was inevitable. I was hesitant on the premise that was being described in press releases and interviews. To me, this idea came off as Valiant trying to hit a giant Reset Button on Aric of Dacia after the fifty issues under Robert Venditti. One of my biggest pet peeves in superhero comics (most specifically Big 2 superheroes) is the “need” to reset characters constantly. It ensures that characters never feel like they truly progress and subsequently the universe itself stagnates in turn. The Valiant Universe, probably because of its young age, never felt backwards moving, even with creators on characters changed. Best example now is the current “Harbinger Renegade” series that can’t exist without the events of the previous “Harbinger” series.

So, with that it mind, does Matt Kindt and Tomas Giorello hit the reset button on our Visigoth?

Honestly? Sort of kind of?

Let’s get the good things out of the way. The first-and-foremost being that this book is beautiful looking. Tomas Giorello and colorist Diego Rodriguez have been floating around Valiant on one-shots for a bit now but now with this first arc, they are starting quite strong. Giorello made a name drawing “Conan” and that kind of War Lord of a Strange World vibe is here in the heavily detailed, almost painted nature of the world. From the quiet, warm intimacy between Aric and his new wife, Schon, to the fierce grimness of the war between alien nations that Aric is forcibly conscripted into, the art has a flow to it where other artists can feel stiff.

The artists also bring a cool sense of design when creating these alien forces, the Azure Nation and the Cadmium Emperor. Xenobiology-wise, the alien world isn’t really that alien (the people of the Azure Nation really only difference from humans being that they have blue skin, which makes sense considering the name), but tech-wise, Giorello and Rodriguez bring a fun anachronistic approach to the battles. Giant armored tanks that are launched into a Normandy-esque assault mix with the use of swords and laser blasters along side Aric’s steampunk-esque arm attachment. Just fun pulpy sci-fi fun in the visuals.

With that out of the way, let’s talk about the story.

Kindt starts us with an Aric of Dacia that is older, more weary and cynical than the mature king we left off with. He exposits that he grew sick of the people of Earth’s continuous fighting (an understandable feeling) and left the world so he could be in peace. He still has the armor, even though he hasn’t used it in years. He just wants to live in peace.

Here’s where when I said that this felt like a “sort of kind of” hit of the reset button.

Despite this Aric being older and supposedly more wise, this still feels like the Aric we were introduced to back in 2012, a bit bitter, a bit quick-tempered. And then the similar plot beats are being hit. Aric is forcibly conscripted -essentially enslaved- into an army of aliens and due to being in that position, he discovers/rediscovers the armor and it makes him into one of the most powerful weapons in the universe. Heck, you can even argue that Aric being with Schon here is a redo of his falling in love with Sanna in 2015-16 Earth after losing Deidre after being abducted by the Vine. One could make the argument that this book needed to feel so different from its predecessor to find its own identity and I agree with that. What I don’t agree with is this series actually being different. The set dressing is different, but at the core it does feel like the same story. And normally, this wouldn’t be a problem, but this kind of “let’s clear the board of everything we’ve built” type of scenario is the first time the relaunched Valiant has ever done this.

Don’t make that all seem like I hated this issue. I didn’t. Kindt has provided some cool background for the book. He has introduced a couple of characters with hopefully good payoff in the future. Considering the information about we have about this book shows a clear roadmap of the series for the next year and a half, we can see the faith Valiant has in this story. But here, as of just this first issue, it does enough different things with Aric of Dacia, but it still hasn’t shaken off that feeling of starting from scratch. Hopefully, the next few issues after will do a lot to alleviate that feeling, or be awesome enough that I’m willing to let that go.

Final Verdict: 7.0- Some glorious artwork combines with a story that can’t fully shake off the feeling that a reset button was hit.