In this issue, a chapter comes to an end. 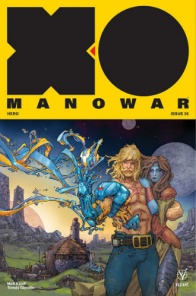 Written by Matt Kindt
Illustrated by Tomas Giorello and Isaac Goodhart
Colored by Diego Rodriguez and Andrew Dalhouse
Lettered by Dave Sharpe
This is it! This is Matt Kindt’s final issue of his Eisner Award-nominated, critically acclaimed run on X-O MANOWAR.
“Hero,” Part 4, the conclusion!
X-O Manowar takes the final battle against the galaxy’s baddest bounty hunters into space to decide the ultimate fate of the universe.

With the plot wrapped up in issue #25, “X-O Manowar” #26 concludes Matt Kindts time writing the book with a poignant epilogue, mostly with the artists that started out with him, Tomas Giorello and Diego Rodriguez. This issues epilogue qualities come through in Aric of Dacia’s introspective monologue as he takes stock of his experiences. Aric’s monologue ties together the various episodes in this issue as it becomes something of a Earth wide road trip. The content of this monologue reads like a love letter to his ever present life partner, Shanhara, the sentient bio-armor that has been with him all these years. As a love letter it is the emotional culmination of everything Matt Kindt and his various artistic collaborators have built towards in this run on “X-O Manowar.”

Structurally this issue isn’t to far off from another issue of Valiant Entertainment written by Matt Kindt, “Divinity” #0. In both cases our leads take stock of where they’ve been while facing the inevitable adventure. Kindt sent Adam Abrams on a long walk in “Divinity,” this time he follows Aric on just another day of work as the protector of Earth. As something of a road trip, it allows Kindt to write a series of 3-5 page adventures for Aric to go on and give Giorello and Rodriguez many different types of scenarios to draw.

As Aric blasts off from crisis to crisis connected by that running monologue, it lets the lead character and creative team take stock of where they’ve been and how they have grown. This is a run that was all about exploring the multifaceted identity of Aric of Dacia. A majority of the collections from this run mark Aric as a class, from soldier to emperor, barbarian, to agent of GATE, and eventually a hero. These classes are the prism with witch Kindt has tracked the characters growth and stumbles. Aric is still growing, of the adventures in this issue the single best page is a simple one of Aric trying to fly to Thailand, or Thai-Land as he puts it, on his own without Shanhara’s guidance. The sincere effort by Kindt and the art teams to treat Aric of Dacia as a complex human being is why this run has packed with more emotional nuance and growth in 26 issues compared to Robert Venditti’s 50 issues.

Kindt’s mechanism for showing this growth was a novel twist on the sidekick role. He gave the armor, Shanhara, a voice and with it someone Aric could always talk to. Their relationship isn’t the uneven power dynamic that defines the mentor-sidekick relationship, theirs is a true partnership. If anything Aric recognizes his own frailty in comparison to Shanhara. This dynamic is waiting for a reading with similar implications to the polygamous triad from Venom – and that was before Schon had a suit of her own born from Shanhara. By giving Shanhara a voice, Kindt gave “X-O” the first constant companion since the original Valiant to explore him with.

Running through these mini adventures is a somewhat surprising element of comedy. This comedy isn’t an attempt by the creative team to create distance from the sincere emotions in Aric’s monologue. They are just these minor gags that come up as Aric goes throughout the day, it underscores the normality of this experience. When a hacker decided to shoot some sort of magical hacker dart at Aric, after a bullet stopping Superman-esque entrance, and the armor literally spits it back out you can’t help but chuckle at the situation. These moments of comedy show Aric as being engaged instead of distant by the menial tasks before him. Giorello and Rodriguez do a good job of framing Aric in various hero shots, showing him engaged in the proceedings allows him to not be read as a distant savior figure.

The physical comedy in these sequences is also some of the best sequential work Giorello and Rodriguez have done on the series. Together Tomas Giorello and Diego Rodriguez create a unique aesthetic that harkens back to pulp covers. The main critique of theirs is that it can be a bit static and lack flow. Giorello’s page designs in this issue either have strong flow or use that static quality to make a point about the action going on in the page. Without the sound page design the comedy of the aforementioned dart spitting would not have played nearly as well. The variety of adventures Aric goes on in this issue also lets them just go plain big in spots and flex.

“X-O Manowar” #26 is an introspective issue as Aric contemplates his actions jumping from place to place. To get that mood across you need a lack of friction, which is why the one moment of extreme friction feels compounded as the art team is swamped to Isaac Goodhart and Andrew Dalhouse for a three page sequence set in Mexico. The two art teams are near opposite ends of the artistic spectrum. Goodhart’s representational cartooning is nothing like the layered and classical composition of Giorello. Andrew Dalhouse colors everything bright and solid where Rodriguez uses multiple shades to give everything a sense of volume against stark blacks. There isn’t anything technically wrong in Goodhart and Dalhouse’s work, they even keep similar page design sensibilities. The artistic swing with the turn of a page is just rough. It was interesting to see Goodhart draw Aric in the armor as that is a subject you don’t normally see him draw.

As Aric readies for a rest after a hard days work, running his hands across wheat in an homage to Terrence Malick, this chapter of his story concludes. Much like the conclusion to Jeff Lemire’s years long run on “Bloodshot” I vainly hope Valiant gives the character the rest he desires. Valiant has already teased the next adventure of “X-O Manowar.” Valiant doesn’t publish much so taking “X-O” off the board for a while would open up a spot for someone new in a meaningful way. As Aric walks with Schon to their cottage, the most recent relaunch of “Bloodshot,” titled “Rising Spirit” and how abysmal it was comes to mind – it has already been announced there will be a new “Bloodshot” series and team replacing it in the fall. I hope that the next creative team have something new and interesting to add to the character like Matt Kindt and the various artists, who are credited in a thank you page, have.

Final Verdict: 8.0 – The creative team end this volume of “X-O Manowar” in fine fashion and give the character a strong run to point new readers toward.