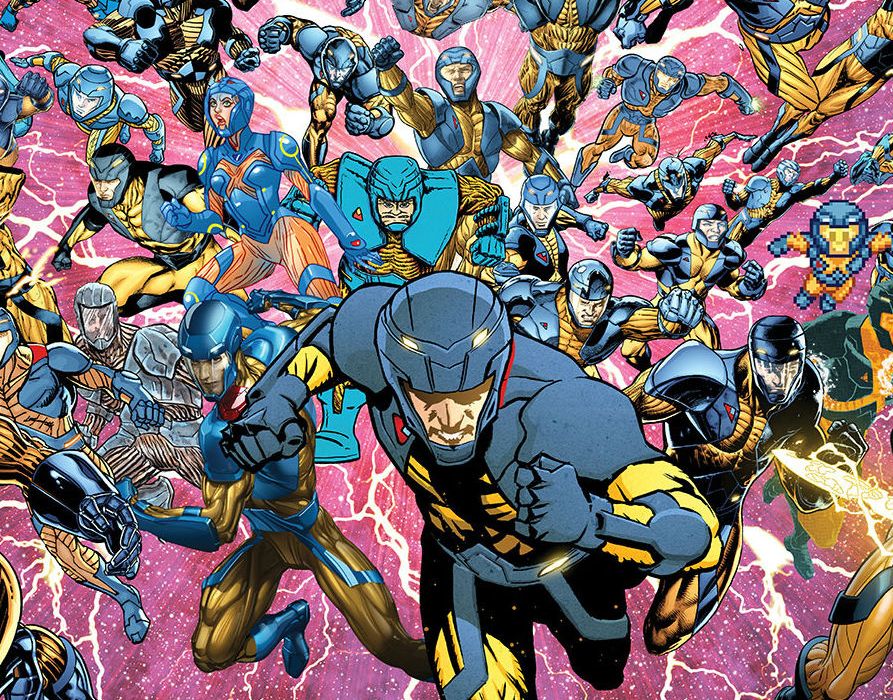 This is it. Fifty issues. Several specials. An entire comic event. All of it leads up to this, the closing page on this segment of Aric of Dacia’s life as Robert Venditti and a cavalcade of creators bid farewell in this last issue. Let’s see if it nails the ending in this spoiler-free review. 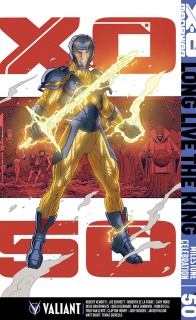 For centuries, the sacred X-O Manowar armor has stood unrivaled as the universe’s most powerful weapon. Today, will it equal Earth’s doom? An unthinkable alien race known only as The Torment has come to our world in search of the armor’s secrets. Now, they stand opposed by Aric of Dacia – former slave, noble warrior, resolute king, and current master of the armor’s near-limitless capabilities. But is one man…and one weapon…enough to repel a force capable of leveling a thousand civilizations?

Since 2012, Valiant Comics has been building its universe back up, ranging from books the tense and spooky books like “Harbinger” and “Doctor Mirage” to the delightfully fun like “Faith” and “Ivar, Timewalker”. And it all started with “X-O Manowar” by Robert Venditti and Cary Nord. From that point, Aric of Dacia has led the Valiant universe back into resurgence as he himself went from a brash, hot-headed brute to not only an incredibly wise leader of his remaining visigoth people, but as an inspiration for the world. But now this series comes to an end; it’s X-O Manowar vs. The Torment as Robert Venditti puts his period mark on this character.

This is the final battle and one would expect a colossal punch-up. The climactic battle between our hero and the cosmic horror monstrosity villains. But while there is some action, courtesy of Joe Bennett and Ulises Arreola, that big Avengers-esque final battle is the least important aspect. Venditti decides to throw in quite the wrench when it comes to The Torment while Aric is in their clutches and I have to say, it really works well when you consider how Venditti developed Aric over these fifty issues. Old Aric wouldn’t have asked questions. He wouldn’t have tried another way except “There is the enemy! Kill them!” But the Aric that survived Vine enslavement, Ninjak, Unity, Armor Hunters is a different man. A better man. I know there are going to be people that feel the ending to the Torment is really anti-climactic and, while of course we are entitled to our opinions, I have to disagree with. Many of the arcs throughout this series ended with big brawls, going a different way for the end, but in a way that makes sense, feels earned.

On the art side, Bennett and Arreola provide the work going on outside, while Roberto de la Torre and Dean White take care of the scenes inside The Torment. Bennett/Arreola provide solid enough superhero artwork, a lot of detail for these bombastic fight scenes but it is the final scenes they provide that they soften up, allow real humanity in this happy ending (Will say, Bennett’s Aric without his helmet looks a lot like Thor and weirded me out).

De la Torre and White are a lot weirder and sketchy as Aric sees what The Torment see. A tapestry of images of things and places from all around the universe and the art team provides quite the somber awe to the images as Aric takes it all in. It’s this visual depth that really sells the idea here of Aric really understanding The Torment and why they do what they do.

But these are not the only artists on the main story. There are several double-page spreads of flashbacks, showcasing the entire series and we have a lot of artists that have had a major influence on the series. Robert Gill (The Kill List), Rafa Sandoval (Exodus), Diego Bernard (Dead Hand), Doug Braithwaite (“Unity”, “Armor Hunters”) and -of course- Cary Nord who helped launched the series. Each artist provides a flashback that was so intrinsic to the piece of the journey they helped forge, from Cary Nord depicting Aric’s enslavement and freedom from the Vine to Sandoval’s depiction of Aric and Saana’s wedding. They are wonderful tributes and provide a sweet tinge to the ending of this book.

But the end to “Long Live the King” is only part of this final issue. We also got some nice little short stories to go with it. So, let’s run through them:

The Two Deaths of Gaius Maelus by Van Lente & Henry: The team that launched “Ivar, Timewalker” reunite and bring back a character from that series, Dr. Neela Sethi. She and Aric journey back to the days of the Roman Empire to meet Gaius Maelus, the man who launched the attack on Aric’s people oh-so-long ago. It’s a simple tale of the difference between justice and revenge and once again highlights how much Aric has changed, all the while the creative teams adds the same wit and charm they brought with “Timewalker”.

His Greatest Failure by Houser & Pulido: Ninjak takes center stage as Houser and Pulido craft a classy, fun and brutal story about Ninjak vs. the remnants of the Vine plantlings that have lived among humans for centuries. Pulido brings the same mad page design work he brought to “Hawkeye” and “She-Hulk” as we see how X-O influenced our ruthless spy/ninja. Like “Gaius Maelus”, it’s a simple story, but a nice heartwarmer.

The Future by Kindt & Giorelo: This one is more a tease than a story. I do not want to spoil anything on this one so I will just end it by saying: interesting.

For four years, Robert Venditti and an army of artistic talent have crafted a sci-fi superhero story that was grounded in a violent man trapped in an unfamiliar time growing into maturity and wisdom. It had some high highs and some low lows. At the end of it all, this may not have been the ending some people were expecting, but it is one that the series deserved.

Final Verdict: 8.7- A well deserved ending to this chapter in Aric of Dacia’s life.

We have an interview with Robert Venditti on the end of “X-O Manowar”.