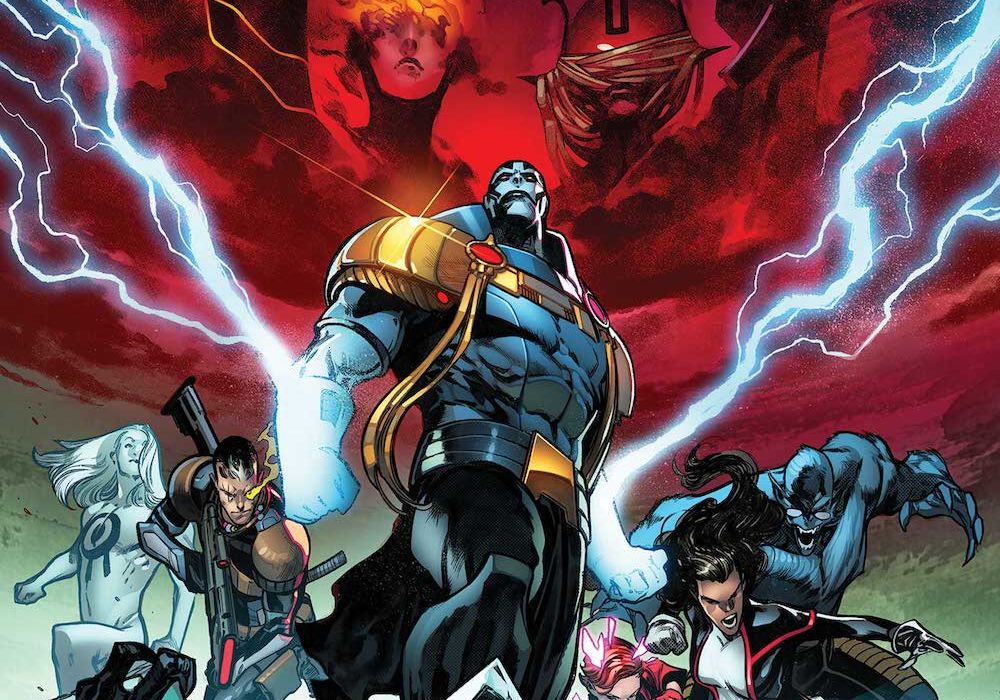 Remember when the X-Men were a relatively simple cast of characters that were a powerful and effective stand in for discussing race relations and bigotry in 20th century America? Well, now the X-Men have their own nation on the sentient island of Krakoa and while it has proven to be a haven for mutantkind, dark forces are brewing in other dimensional realms that threaten this new home and will require ten champions to wield ten swords that will determine the fate of an entire realm.

Get ready for a massive, epic, 22 part event comic that threatens the entire Marvel Universe…again.

Oh, and before anyone asks, the “X” in the title is pronounced like the Roman numeral 10, which means the title would more accurately read “Ten of Swords”. 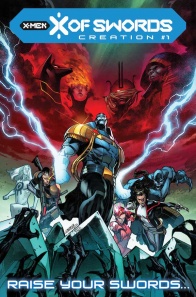 X OF SWORDS – CHAPTER 1
A tower. A mission. A gathering of armies.

Within the Marvel cosmology there exists a place known as Otherworld. Long story short, it’s a pocket dimension adjacent to Earth that is shaped and formed by the collective subconscious of the British Isles and is the realm of King Arthur and Avalon. Unfortunately, a group of dark and warlike entities have invaded the realm and are eager to put it to the torch. This wouldn’t be an issue if it wasn’t for two problems. First, the Otherworld is connected to the mutant home island of Krakoa through a gate that cannot be closed and second, it turns out this is a very ancient and powerful threat that the mutant Apocalypse has dealt with before and is unfortunately very familiar with.

The script for “X of Swords: Creation” #1 comes courtesy of writers Tini Howard and John Hickman, both of them capable writers and both of them integral to the modern line of X-Men books. However, while the book gives credit to both writers, it’s appears that Hickman had the biggest impact on the structure and creation on the book itself, mostly because “X of Swords: Creation” #1 has all the hallmarks of a Hickman story.

Hickman’s style of storytelling is an acquired taste for some, and “X of Swords: Creation” #1 is the kind of book that probably isn’t the best for new readers who are just looking for something to introduce them to the X-Men or the broader Marvel Universe. Hickman is the king of big idea storytelling and falls into his trademark habit of introducing brand new ideas, themes, and locations without any sort of preface and then explaining them away with massive exposition dumps that are informative, but disrupt the flow of the story. It’s a style that is very difficult to read quickly, and probably requires a second or third readthrough if you want to understand everything that’s going on.

That’s not to say that “X of Swords: Creation” #1 is lacking in personal moments or subtlety. For a story about the destruction and conquest of worlds, it has some very well written political machinations and fun character moments. Case in point, the council of the mutant’s new home makes the very reasonable choice to close the portal that threatens to release an invading army into their world, but their actions are halted for very understandable reasons. We even get hints at the humanity of the mutant Apocalypse, one of the oldest and most powerful mutants who ever existed.

While your enjoyment of the script for “X of Swords: Creation” #1 will depend on your personal taste, the artwork is excellent across the board. Pepe Larraz is the artist on the book, bringing a familiar blend of hyper realism and cartoon facial features to the comic that could be described as “modern superhero”. However, while the artwork is pretty standard for a modern superhero story that can afford to have a high production value, Larraz elevates the art to a level of detail and dynamism worthy of Marvel’s greatest characters. The detail on the characters and backgrounds is fantastic, which must have been incredibly time consuming to create, and it combines with Marte Garcia’s gorgeous colors to create a book that feels rich and decadent. On top of that, Larraz makes great use of action lines, panel layouts, and dynamic poses to provide a clear sense of energy to the book and does a great job of directing the reader’s eye and emotions to exactly where the creative team wants them to be.

If the art does have one tiny issue, it’s that the panel layouts have little unifying theme behind them, which can make the book a little jarring to follow. Larraz will swing wildly between traditional nine panel grids to non traditional panel layouts for action scenes and flashbacks. It doesn’t kill the book since it’s clear that the page layouts are helping to enhance the story, it just feels like the book can’t make up its mind on how it wants to tell its story.

“X of Swords: Creation” #1 is the opening to a long event storyline that sets up the coming conflict pretty well, and while it may be a bit too long and a bit difficult to follow at times it’s still a well written story with lots of big ideas and very pretty artwork.

Final Verdict: 8.2- Marvel’s newest event kicks off in grand style with a fun set up and some great character moments, just be prepared to read it slowly and do some homework.