Yakuza! Demons! Killers! With their latest new comic, publishers IDW have tried to hit on that familiar, winning formula of combining peanut butter with chocolate with psychotropic drugs. “Yakuza Demon Killers” is one heady mix of genres, all combined in just one book, and heading into this I expected a whole lotta fun complete with all the usual thrills and spills. So just how well has the team managed to deliver on the promise that this title seems to suggest? 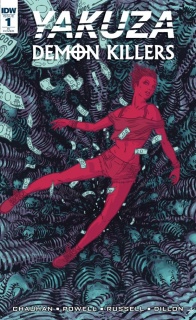 Written by Amit Chauhan
Illustrated by Eli Powell
Tokyo harbors a dark secret! When a museum heist goes wrong, a damaged thief named Ochita becomes trapped in the middle of a battle between a horde of demons and the merciless Yakuza. No matter who wins, humanity loses.

After finishing my first read through of “Yakuza Demon Killers” I could definitely sense the amount of love, care and attention writer Amit Chauhan and artist Eli Powell have put into their book. The pair, who are also billed as co-creators, have done enough to suggest that this was more of a passion project for them, rather than, say, for vanity or a paycheck. You can see it in the way they’ve crafted their characters, giving them specifically chosen nationalities, backstories and distinct appearances. This goes a long way in making them feel more real and thoughtful, even if they are all scumbags who happen to find themselves fighting demons. Similarly, the story itself feels original, even if many of the elements on their own appear recognisable.

The story sees a Brazilian con-artist and thief Rizzo (pronounced His-zo) team up with a young Japanese junkie named Ochita. Helped out by two American bucks, who are there to provide ‘the muscle,’ the team set out to steal a valuable ancient sword from a museum. Of course not everything goes as planned and our down-on-their-luck heroes find themselves caught in the middle of a battle between some deranged Yakuza and a squadron of otherworldly, blood-thirsty demons. With all the details the team have added to their book, from character building to a thought out location, a lot of work has been put in to build “Yakuza Demon Killers” from scratch.

The strong characters and well developed world are let down however by the atrocious dialogue. Amit Chauhan seems to not trust the inherent appeal of his own book as many scenes are filled with speech basically reminding us what we are reading. Rizzo is the worst offender of this, the majority of his dialogue is expositional or, much more frustratingly, he will literally describe what just happened in the panel before. We do not need a running commentary on events when we can clearly see what is happening for ourselves. It’s like reading an early Stan Lee comic book. This is such a huge shame as the premise and the world the team has crafted is so strong, I cannot tell if Chauhan is just being condescending, nervous or just straight up lazy.

The book saves itself largely in it’s design. Illustrator Eli Powell has used a suitably dark and gritty tone for the book, which compliments the story really well. His designs are on point too; characters are all very distinctive and visually arresting. Rizzo’s look is across between old-school punk and new age masculinity while the Yakuza clan are a hodgepodge of styles, shapes and sizes. Though my favourite work he has done here are his demons. Powell doesn’t rely on just one design but manages to create a whole host of individual monsters, no two demons are alike. And each one is just as horrifying as the last, Powell ha thrown in some obvious references to Silent Hill for example. The hoard of demons is one of the most impressive features of “Yakuza Demon Killers,” it is hard not to appreciate the effort gone in to prevent a copy and paste affect.

Overall, I think the book has much more in its favour than against it, Chauhan and Powell have truly made a book that I would love to get into. Unfortunately, the dialouge and pacing is too bad to ignore. When we are not being told what is happening, we are moving forward too fast that any actual good dialouge is soon forgotten. For the most part of this issue, poor Ochita is reluctantly dragged from one place to another by Rizzo, I don’t think we’ll get a better metaphor for us than that.

Final Verdict: 6.8 – The potential is there, but unfortunately it totally missed.