What would you say are the most important movies of the Marvel Cinematic Universe? I want to be clear, I’m not necessarily talking about the best movies but the most important. While the two categories often overlap, there is a difference. For example, I do not like Doctor Strange. It is just Iron Man with magic and it’s boring to boot. However, it does mark the introduction of both magic and the multiverse into MCU lore so it’s on the list. Another of the most important MCU films is Guardians of the Galaxy. 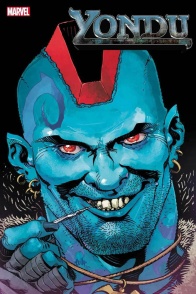 Written by Zac Thompson & Lonnie Nadler
Illustrated by John McCrea
Lettered by VC’s Joe Caramagna
Colored by Mike Spicer
Yondu, lone Ravager and all-around scoundrel is about to hit the biggest pay day of his life when he stumbles upon a dangerous new weapon! But when this artifact turns out to be deadlier than he bargained for, will the reward outweigh the risk as Yondu finds himself targeted by a mysterious mercenary? Plus, when an unexpected visitor from the future turns up to stop Yondu, it begs the question: exactly how bad did he screw up?! Find out in this all-new miniseries from ZAC THOMPSON and LONNIE NADLER (AGE OF X-MAN, GUARDIANS OF THE GALAXY ANNUAL) and JOHN MCCREA (Dead Eyes)!

By any sane man’s metric, Guardians shouldn’t have worked as well as it did. There’s a talking tree and raccoon…for crying out loud, there’s Howard the Duck! Yet, it successfully introduced Marvel’s cosmic universe to wide audiences. The movie was so effective that it made household names out of some pretty obscure characters. I certainly wouldn’t be writing a review for “Yondu” #1 if not for GotG.

I was pretty skeptical going into this mini-series. Yondu’s plenty fun in the movies but that’s as part of an ensemble. The focus is never solely on just him. With a bright enough spotlight, you notice a character’s flaws. That’s how it was at the start of this issue for sure. Maybe three pages in and Yondu started wearing on my nerves. His internal monologue through the entire comic can be a bit grating. The issue’s twist helped bring me back in though. “Yondu” #1 stars not one but two Yondus. There’s the more traditional, original version (we’ll call him Future Yondu to keep the two straight) and the more recent version based on the MCU. When Yondu steals a cosmic artifact, he’s messed up so bad that future Yondu has to come back to stop him.

The comic is at its best when both Yondus are contrasting one another and interacting with each other. There really isn’t enough of it in this book and it takes a while for the two to meet. On a meta-level, it is particularly interesting to see how one character could branch into two drastically different directions. Future Yondu is a noble warrior. Yondu is a rough and tumble space pirate. Future Yondu’s wary of technology, Yondu embraces it. Future Yondu is spiritual and deeply ingrained in Centaurian culture. He proudly displays his fin. Yondu has rejected his people’s culture completely. He hacks his fin off. The list of differences goes on and on.

The artwork is a bit of a mixed bag. John McCrea’s gritty artwork is a good fit for a rogue like Yondu. I like the slightly silly sound effects like ‘FLATCH’ OR ‘CHOOM’. There are some really good pages. It’s cool to see a shadowed Yondu skulking around a pillaged ship. Future Yondu bidding goodbye to his family is indeed a tender moment. Future Yondu’s introduction is great as well, disjointed panels showing his trademark yaka arrow making short work of mercenaries. It’s dark and violent but heroic all at once.

What really hinders the book for me is all of the visual gags. In all fairness, humor is largely subjective. What makes some laugh, falls flat for others. The visual gags really fall flat for me. If it was just a couple, it would be an easy thing to ignore but there’s really so many here. Since comics are a visual medium, it definitely feels like a big problem.

Yondu calls his ship ‘The Blue Moon’ and has plastered a giant picture of his naked behind on the rear. On the ship there’s a pin-up beauty with Thanos’s face taped over it and another pin-up of a literal duck. I don’t want to see a naked Yondu picking from his teeth with a butcher’s knife. The one that really got on my nerves was Yondu having a grill that spells out ‘Bad Boy’ across his front teeth. There’s…I really don’t think there’s any good explanation for that. Why? Just why?

With every #1, be it a mini-series or a regular ongoing, it’s important to hook readers so that they will come back for more. On that front, I don’t know if the comic is that successful. would I like to see more of the two Yondus bicker and fight? Sure. Do I care about what happens with the Herald’s Urn? Not really. I’m not terribly interested in seeing why Yondu stealing it is so catastrophic to the time-stream either.

The comic’s villain, the alien that shows up on the final page stinger, already seems bland as well. He’s got a sword for a hand if that interests you at all. He promises to kill Yondu…you know the main character with a bloodline that stretches far into the future. So yeah. I guess we’ll have to wait and see next issue…or maybe we just skip it. Like Yondu, it could go either way.

Final Verdict: 5.5 – The two Yondus are Mary Poppins…Poppinses? Poppi? Ugh, you get it.