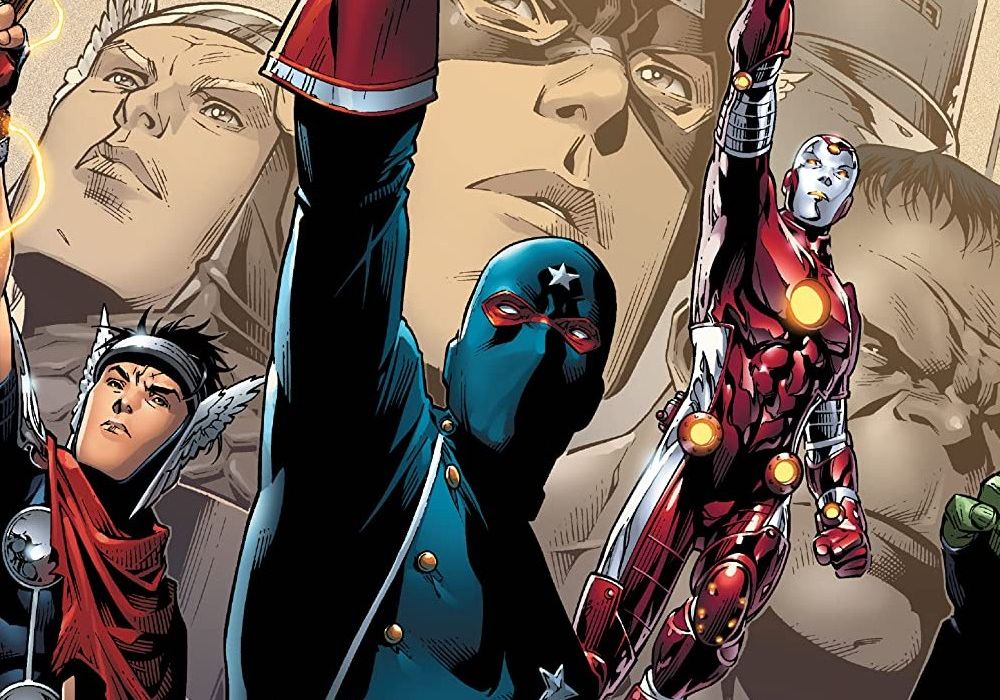 I bought my very first comics way back in fifth grade. One of those comics was an issue of, you guessed it, “Young Avengers”. Issue number two to be exact. This title blew my mind back then and some fourteen, fifteen odd years later, it still holds up. The whole YA run is pretty good but the team’s origin story, the first six issues collected in “Young Avengers” Vol. 1 Sidekicks, just might be the strongest. With “Empyre” coming soon, let’s take it back to where it first began for Hulkling and his friends. 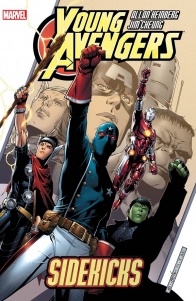 Written by Allan Heinberg
Illustrated by Jim Cheung
Lettered by VC’s Cory Petit
Colored by Justin Ponsor
In the wake of AVENGERS DISASSEMBLED, a mysterious new group of teen super heroes appears. But who are they? Where did they come from? And what right do they have to call themselves the Young Avengers?

I love “Sidekicks” so much that I want to get my two small complaints out of the way so that we can get to the good stuff. First off, the Iron Lad and Cassie ‘romance’ feels forced and is pretty rushed. Why does Kate ask if Cassie is okay when he leaves? She knew the guy for maybe three hours, Eli was the one who actually knew him. The ‘romance’ comes back beyond these issues too and…again, they knew each other for maybe three hours. Not exactly what I’d call star-crossed lovers. My other complaint has to do with the time travel. Not that the time shifts and the drama aren’t enjoyable, it’s just that the rules make no sense. Iron Lad can’t alter the time-stream while Kang moonwalks up and down it? Honestly, that’s just time travel in general. The rules are all over the place, just don’t think too hard on it.

The artwork in “Sidekicks” is fantastic. I used to just stare at the panels for minutes on end. Justin Ponsor did great work providing vibrant colors to accompany Jim Cheung’s pencils. Cheung really puts his best foot forward, making the most of both the quiet moments and the epic action. The artist has a cinematic style that really fits superhero comics and he’d be great drawing any team. Not to brag but I imagined what a Jim Cheung drawn Justice League would look like a solid decade before we actually got it.

There are so many great panels and pages in “Sidekicks” but I’ll try to narrow it down to my favorites. I love the page where Iron Lad finds the Vision. The boy from the future looks up at Vizh’s stoic and mysterious holographic projection in awe while the synthezoid’s body lays at their feet, still mangled from the events of “Avengers: Disassembled”, an expression of agony frozen on his face. I really liked that they went with a two-page spread when Cassie first grew and passed out, really showing how big she is and how small the others are by comparison.

I also enjoy the spread of the fully formed team charging at Kang but the final page is probably my absolute favorite. Decked out in cool new costumes, the defiant youth charge into their future. Those costumes really are the best though. It is definitely worthy of note that Jim Cheung made all-new character designs for the Young Avengers, costumes both familiar but new, similar but distinct from their adult counterparts. Then the guy actually made a second set of different costumes. Iron Lad’s Silver Centurion inspired armor that’s even more futuristic-looking than Iron Man’s is perfection. So is Patriot’s second costume with the immaculate white pants, golden stars on the shoulders and eagle belt-buckle. Janet Van Dyne, eat your heart out.

One of the best things about “Sidekicks” is it’s mystery. The main question is stated plainly on the very first page. “Who the #*&% are the Young Avengers?” Unlike “Thunderbolts” back in the 90s, all the secrets aren’t revealed in the first issue. Heck, the mystery isn’t even fully resolved in this arc. You can read this volume as a stand-alone but it’s already planting seeds for story lines and arcs to come. So many elements come together to make this mystery particularly engaging. For example, the team’s very existence is strange. You may not notice it at first but Marvel doesn’t really do sidekicks. The ‘Junior Avengers’ stick out even more because of that and you’re eager to find out who they are. Save for maybe Kate, they all are connected to the Avengers legacy but not in the straightforward way that you might think.

The conflict between the two generations is especially well-done and you get insight into everyone’s perspective. It’s not one of those times where one side is clearly wrong here. Jessica Jones is perfectly cast as a former young hero now more aligned with the old guard, seeing both sides of the argument. Cap and Iron Man both have valid reasons for wanting to shut the Young Avengers down. Bucky’s death has soured not just Cap, but all of popular culture within the Marvel Universe, on the idea of sidekicks. Coming off the heels of “Avengers: Disassembled”, a surprisingly earnest and heartfelt Tony all but begs Cassie not to follow in her father’s footsteps, worried she’ll be killed too. On the other side of the coin, the Young Avengers are clearly fanboys but at the same time refuse to stand down or stop being heroes just because they’re told to.

Finally, the comic’s greatest strength is it’s characters. Writer Alan Heinberg gives even minor supporting characters like the Daily Bugle staff strong personalities but the titular Young Avengers really stand out in their debut as a likable and engaging mix of people. Hulkling and Asgardian are already adorable, protective of one another and awkwardly flirting in battle to the point of distraction. The confident Kate Bishop’s the only one without powers or any superhero ties but is ironically the most competent, saving the team’s skins several times. Cassie Lang, daughter of Ant-Man, has the most straightforward tie to the Avengers. She’s plenty nice but doesn’t back down, demanding a place on the team and her father’s gear as her birthright, eager to follow in Scott’s footsteps.

Eli, my absolute favorite, is stubborn, headstrong and intense. Every time he tells off Cap right to his face it warms my soul. Finally, Iron Lad is a fascinating tragic hero. He grows more and more desperate as he tries to avoid his villainous destiny. He just wants to be a hero so bad you can feel it…all of them want to be heroes. Whether if it’s to honor another’s legacy, to discover their origins or simply because it’s right, the Young Avengers are here and determined to blaze their own path. So check out their story. The kids are alright.