We now return to “Young Justice!” Not the show of the same name, although I am looking forward to when it resumes. The “Young Justice” comics have been picking up speed, with the first arc concluding this issue. Does the team come together? Will questions be answered? Read on and see. 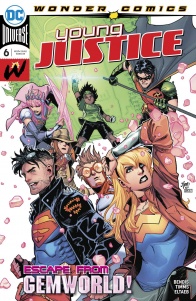 The secrets of Gemworld begin to unlock themselves for the newly reformed members of Young Justice-Tim Drake, Conner Kent, Jinny Hex, Wonder Girl, Impulse and  the new Teen Lantern-but is it too late for the teen heroes to help Amethyst bring some order to her chaotic realm? Fan-favorite artist Elena Casagrande also joins the team as she delivers a look at Jinny Hex’s origins and how she came to be in Metropolis on the day the new Young Justice formed.

From its first issue, “Young Justice” grabbed both characters and readers and pulled them along for a ride. There was little time to even catch our breath as they were pulled through Gemworld, dealing with mystical threats and learning to get along as a team.

However, issue 6 manages to both wrap up the story and catch us up with all the characters. We finally learn what happened to Superboy after he landed in this new world (and how he has a wife and child), how Teen Lantern got her powers, and what Jinny Hex was doing in Metropolis. Of course, there are still plenty of questions left unanswered, which is fine because there’s still plenty of action to be had.

The comic moves at a great pace, made all the easier by Bart’s super speed and impulsiveness (as befitting his hero name) kicking things along whenever there’s a risk of slowing down. A personal favorite moment (which is a little spoiler) comes from Bart running out to steal a giant opal in the space of one panel, while Amethyst is busy explaining all the dangers and devastating traps that it’s hidden behind. The timing is so perfect you might not even notice that Bart goes missing for a panel, and it’s all the better for it.

The action scenes are a combination of highly entertaining dialogue and high-impact action. Artist John Timms adds a lot of weight and force behind the giant castle monster, making every impact and crash feel like it has real presence.

Not to mention the final battle itself concludes in an incredibly satisfying manner. It’s built up nicely, with the Dark Lord Opal framed in a properly dangerous and intimidating manner (the upwards angle he’s drawn at upon his appearance does well to make him stand out as a larger than life figure). He poses just enough of a threat to be a good catalyst for bringing the team together, making it all the more satisfying when they’re a proper team at last.

At the same time, writer Brian Michael Bendis peppers in amusing lines of dialogue like “You guys do what you gotta do… I’m gonna punch a castle in the face!” In fact, the dialogue throughout the entire issue is incredibly solid – everyone has a distinct and recognizable voice, and the usual “Bendis-isms” that plagued much of his work at Marvel are next to nowhere to be seen. The occasional interruptions and short cadences we do get work well enough, as they’re used sparingly and properly illustrate how the characters bounce off each other.

In fact, there’s even a great moment of storytelling that works without dialogue. The spacing of the panels, as well as the expressions John Timms gives the characters and the tone-setting lighting and colors from colorist Gabe Eltaeb, convey every thought and unsaid word that the characters have. It’s a powerful moment that helps close one chapter to a character’s story and sets up the next.

Overall, John Timms does a good job on the character designs. The artwork is solid all around, including great designs for the massive moving castle monster and Opal himself. We get a good feel for the characters from the way they hold themselves and interact with each other, plus the expression work is solid. If I had to critique one thing, it would be Superboy’s chin seems to jut out to a noticeable extent, but that’s such a minor detail it’s hardly worth noting.

Gabe Eltaeb’s colors help bring the world to life. The Gem is a world of mysticism and crystals, so a strong color scheme is important here. Fortunately, we get just that, with practically every color of the rainbow getting a time to shine without feeling gaudy or out of place. The pinks and purples of Amethyst don’t feel out of place next to Superboy or Wonder Girl in their reds and blues or Teen Lantern’s green getup. The entire worldscape feels vibrant and bright, with orange skies and purple nights.

Overall, it’s felt like “Young Justice” is pure service for the fans of the series and characters since issue one, but I mean that in the best of ways. It’s given us character reunions we’ve wanted for so long, new characters and dynamics that are a joy to watch, and a fast-moving plot with a good balance of personal stakes and high action. Above all else, it’s just plain fun!

Final Verdict: 9.1 – Fast-paced, entertaining, and filled with a lot of heart. Every page has something enjoyable, and the new “Young Justice” team is one we’re likely to remember as fondly as the first.