The latest “Youngblood” reboot reinvented the Liefeld heroes for a modern audience, and managed to churn out a relatable story with all the intrigue and aesthetic of the original. Let’s see how the second issue carries on. 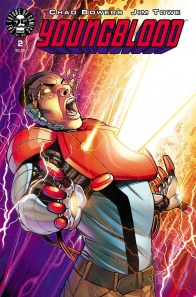 “YOUNGBLOOD REBORN,” Part Two The ‘Blood is back, baby! But for how long? Shaft arrives in Baltimore with a warning for the team of rookie heroes calling themselves “Youngblood,” but will it fall on deaf ears? Meanwhile, President Die Hard meets with the architects of the popular Help! app and struggles with just how far he’s willing to go to protect the country. All this, plus Badrock keeping secrets? Seriously, Badrock…already? What the hell, dude, it’s only the second issue?

Chad Bowers manages the impossible task of making a multilayered, team-based comic read seamlessly. And it’s only the second issue! We manage to get a good feel for each character through telling details like speech patterns and their decisions and opinions. Sure, it’s interesting to be given exposition and backstory like in the case of President Diehard, but it’s even more compelling when Badrock talks about how he doesn’t want to be remembered just for saying “YABBA DABBA DOOM”. Similarly, it’s great to see legacy characters like the new Sentinel – someone who wishes to disassociate himself with his former’s crimes and become a hero of his on verdict.

On that note, I’d like to point out just how deft Bowers is at writing young adult heroes. These guys already exude more charm and relatability than a lot of the generic Marvel and DC staple. Someone I love so far that I wasn’t expecting to is the new Vogue. Bowers has her come off as sassy, but not to the point of annoyance, and as someone genuinely likeable who’s on a quest to do some good. There’s a small area between excruciating naivety and jackass know-it-all, and thankfully Bowers can place his teen heroes (Vogue specifically) into this territory.

I’m not a big fan of the heroes fighting heroes trope that seems to have wormed itself into the plot here, but I will say that Bowers makes it feel fresh. Bowers literally plays off the old generation of heroes against the literal young blood, both with a fair stance in the argument and both melding together to make a reasonable conclusion – reform Youngblood, but with a modern outlook. It’s almost like real life! Having Shaft as an ex-criminal too is a tasty plot development that begs for exploration further down the line, but it does give an equal moral footing to him and the new heroes, blurring the generation gap and making them converse without awkwardness.

Jim Towe is working seemingly effortlessly to breathe new life into this series. The action sequences penned here are lithe and believable. Everything looks immediately cool, harkening back to how holding a copy of “Youngblood” #1 must have felt back in the day. I love the fear gas like effect on Shaft, sometimes this type of styling can be a bit cheesy but Towe manages to draw the line between that and utterly terrifying. Surrounding this, Towe juxtaposes having these small, child sized figure performing god-like feats by smashing cars and punching at inhuman speeds. Sure, it’s not a new idea by any means but something about Towe’s shiny, manga-esque artwork makes it feel fresh.

Towe is great with expressing distinctly human emotions on these characters. The opening scene between Sentinel and Vogue is a great display of conversation between the two characters. As Sentinel talks about his child hero being ruined by a criminal display, Towe makes sure you can see the cynicism and disappointment dripping from his façade. Complimenting that, Vogue responds with smooth jumps between cheerful optimism and genuine concern, when Towe could’ve easily gone with the stoic, unmoving faces so typical of superhero comics. Even Badrock, someone who has a cartoon-styled jawline, is drawn with moments of utmost sincerity as he worries for his worsening condition. These distinctions give a lot of life and believability to the heroes, lifting them above the cardboard cut stereotypes they could’ve fallen into.

My only gripe, and it’s a small one, is that there’s little distinction between the young and old heroes. Considering that one of this issue’s hooks is watching the previous generation clash with the new generation of heroes, it can be a bit jarring seeing Shaft look like twenty-five max. I can see where Towe has gone for age lines on his face, and his cheeks are a little more sunken in close-ups, but he does not sport the physique of someone who should be older than twenty-one. It works better with Badrock and President Diehard, but they’re not necessarily human characters either. Badrock’s age is implied a lot more with his declining condition, but Towe supports this with the crackling skin and expressions of struggle. We only see Diehard’s cyborg mask for the most part, but we do get a ‘behind-the-scenes’ type look at his aging human face, which even then looks young for someone who should be close to ninety years old. Again, it’s not an immersion breaking issue, but I shouldn’t have to nitpick something like this.

Juan Manuel Rodriguez brings a pop-star sensibility to the bright four colour comic palette that “Youngblood” strives for. Every page has an eye-grabbing neon vibrancy to it, something which you wouldn’t have seen in the early nineties. I’m also a big fan of how Rodriguez uses a glossy effect on the team’s armour and uniforms. Something like this can definitely be oversaturated, and make everything look like plastic *coughNew52cough* but Rodriguez uses just enough restraint to make these guys look sleek and modern. During the battle scenes, however, the lighting effects can be a little inconsistent. For a scene that appears to be set at night, everyone is lit up like a stage play, almost too the point that I question if someone is holding a stage light off-screen. It does help to focalise the main characters, but it can look a little too candy-like at times.

It’s great to see that the new “Youngblood” series is on track to reinvigorate not only the nineties Liefeld property, but how teen heroes are depicted themselves. Bowers writes a great team book here, making characters I want to root for in the future, and conflicts that are both grounded and personal. Towe gives a modern charm to these once grizzled antiheroes, and Rodriguez holds it all together with sleek, shiny coloring.

Final Verdict: 8.2 – “Youngblood” is moving in a great direction, one that should intrigue old fans and equally entice newer fans.