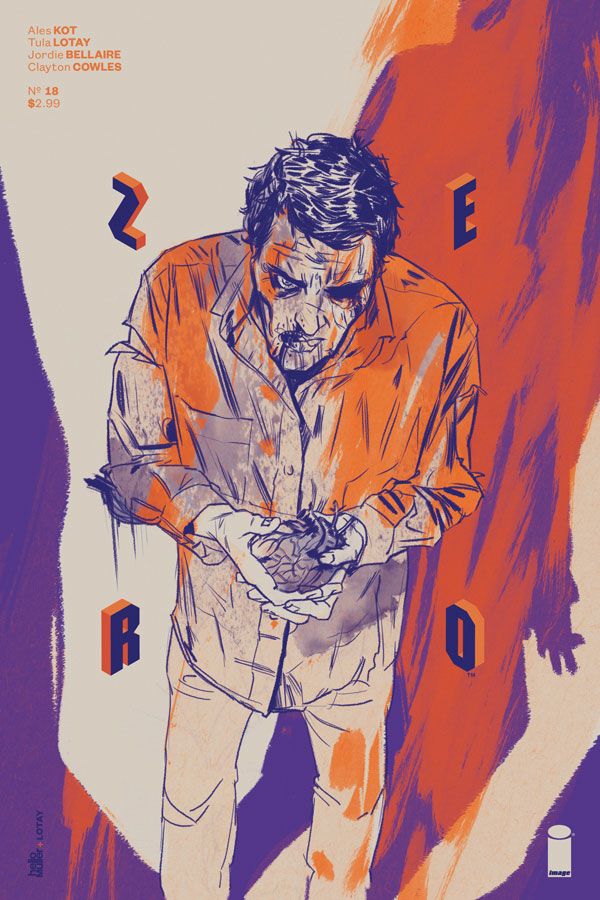 After 18 issues, Ales Kot, Tula Lotay, Jordie Bellaire and Tom Muller bring “Zero” to a close. With the weight of such a dense story on its shoulders, this could easily be a conclusion that solidifies the series’ status as one of the greatest modern comics, or it could be the mark against the series that will be held against it for years to come.

Thankfully, I think it’s more the former than the latter. 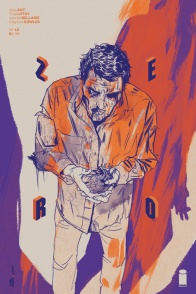 Almost two years ago now, I reviewed a little comic called “Zero” #1. It was then up-and-coming writer Ales Kot’s follow-up to the breakout hit graphic novel “Wild Children” he had created with Riley Rossmo. Now, seventeen issues later, “Zero” has come to a close and I thought it was only fitting to look back and see how far the series has come. In the first issue, I remarked that “Zero” was a war comic and one of the most remarkable things about the series is that is both true and false at the same time. Over the course of the series, the story has evolved to explore a great many places, but the one place it explored the most was the darkness of the human soul. In the last arc, that started with #15, we saw the darkness made manifest as the war of human nature became the conflict that the series focused on. This issue, that conflict came to a resolution.

A quality of “Zero” that has always been fascinating is how it manages to feel incredibly dense in its writing while actually saying very little. Ales Kot is a writer with a deft touch, often having many of the more complex themes of the series be conveyed by the artist alone with no dialogue, no added narration to make it easy to comprehend. That can make his writing frustrating to understand and this might be one of the biggest examples of that being the case. As a last issue, “Zero” #18 has a lot to juggle in terms of closure for plot points and themes of the series. The writing jumps through time and across universes and that can be more than a little confusing. I’m writing this review after my third reading of the issue, the last of which came at the end of a full series reread, and the writing is still largely impenetrable. But does that make it a bad comic? No. Not at all.

“Zero” #18 is dense, yes, but it is purposefully minimalist in how it tells the story through words in order to let the visuals shine and let the meaning be deciphered by the audience. Think of “Zero” as you would an arthouse film. The meaning may not be clear to you, but you cannot deny the artistry on display and “Zero” #18 is a masterclass of art. Tula Lotay returns as the issue’s visual artist and is, as always, simply spectacular. Her art beautifully captures the abstract nature of Kot’s script and brings it to life with a visceral rawness. Lotay illustrates with a line that emulates the fuzziness of a blunt pencil or crayon and that line brings a texture that is almost imperceptible until examined closely. At a distance, through, the line feels ragged and heavy and brings a weight to her art.

The visual storytelling in “Zero” #18 is similarly beautiful and weighty. The issue is full of silent moments that allow Lotay to shine, not only in how beautifully she illustrates the scene, but in how she composes the pages. The story jumps through three different narrative threads for most of the issue and, without spoiling too much, one takes place somewhere that could ostensibly be the real world while the other two are varying levels of fiction. Lotay constructs panels of the latter two sequences with panel borders that are extremely wavy and fuzzy that brings an abstractness to their construction. The contrast between this and the heavily structured, straight lines that border the panels of the real world setting really makes this setting stand out as different from the rest of the book. That is, until the boundaries of reality begin to break down.

This issue is structured in thirds and each third is a different kind of conclusion to the series. The first shows the three aforementioned narrative threads that the series has follows in issues prior. The middle is composed of the issue’s most abstract visuals as the actual conflict of the story is resolved. Then the last third is a silent segment that follows Edward Zero into the unknown that is his life after the events of the series. Or does it? I’m not sure and I think it’ll be a while until I can make up my mind on that one. What’s most interesting about these three acts, if you will, is how they are conveyed through colour.

Jordie Bellaire has been one of the unsung heroes of “Zero”. Along with Ales Kot and designer Tom Muller, she has been one of the few creators on the series to contribute to ever issue as colourist. This issue, she outdoes herself by not only separating the three narrative threads of the first act through a single colour for each one, but by using a watercolour-like palette to help bring the abstractness of the second act to life. Then the third act does something strange: the colours shift to become much more naturalistic. “Zero” has been a series in which the colour palette of every issue has been very meticulously crafted as part of the storytelling and to see the world of “Zero” in natural colours really drives home the importance of this sequence.

“Zero” #18 is not the clean, all answers given kind of conclusion to the story, but if you were honestly expecting that you were reading the series wrong. Instead, it’s a conclusion that brings the themes and story threads together in a very beautiful and poignant way. In a way, it’s almost bittersweet to see the story end on such a quiet note even though it was the peace that the series was fighting for the entire team. Kot, Lotay and Bellaire all out-do themselves this issue which is an astonishing feat considering how talented they each are as creators.

Did this series neatly wrap up all the dangling questions and provide a cathartic send off in the way that only fiction can? No. But in the end, as the issue states: Does it matter? As long as it feels real?

Final Verdict 9.9 – Perhaps the closest I’ve come to giving a comic a perfect 10. A beautiful send off to a series that tackled very complex themes about the nature of human conflict and the dark parts of the soul without trying to provide easy answers. Instead, it provided an introspective glimpse that will hopefully allow us to answer those questions ourselves.

It will be missed.