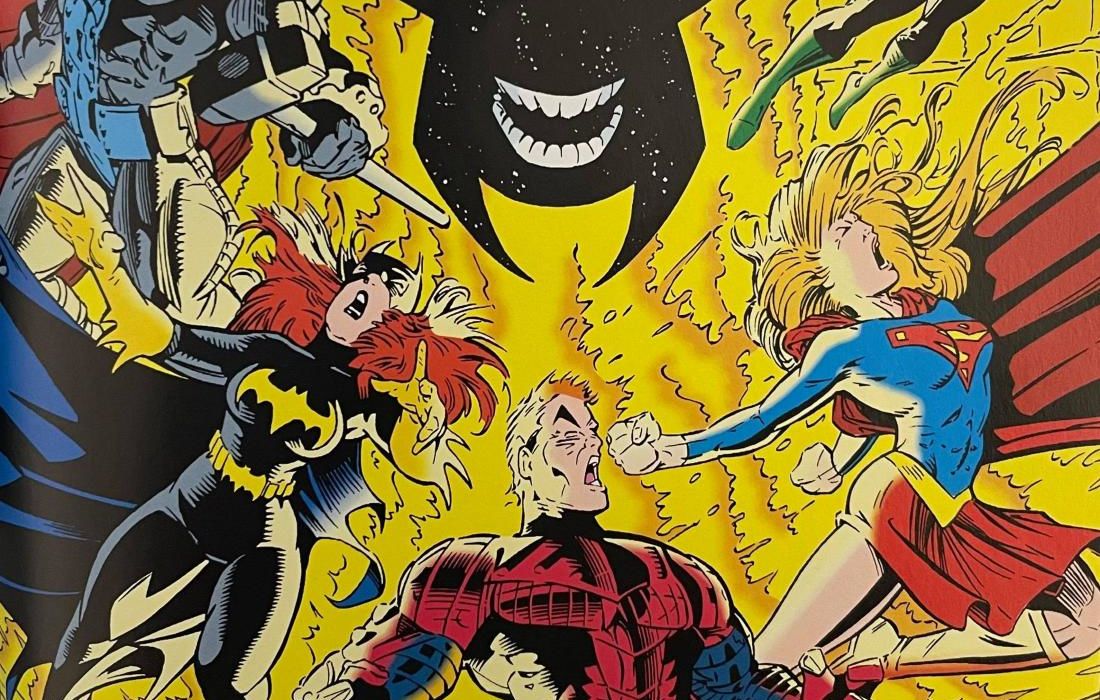 Folks, you’ve heard about it whispered in the corners of DC fandom. You’ve been confused at the odd reference to it in those “modern comics” you devour week after week. What in the darned heck is “Zero Hour”? Why is it called that? Why is it numbered backward? Who is Extant and should I really care? Well, wonder no more, gentle readers. Not only will I be recapping all five issues of the titled event comic, but I will also be reviewing the whole damned thing. Yes, every official lead-up and questionably connected tie-in that DC Comics has chosen to fill up their hefty omnibus tome that haunts the corner of my writing desk. Come with me on this journey through time and more time and some space as we dive into the mess that is “Zero Hour: A Crisis In Time”. 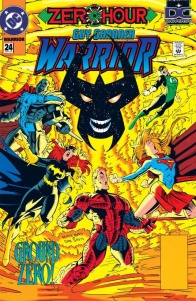 Cities begin to vanish and futuristic characters such as Impulse and Booster Gold disappear. Jack Garrick appeals to The Spectre for help. And Hal Jordan as Parallax reveals his plan to reform and reshape the universe–as he sees fit!

A reminder (I forgot last week!) that I’m scoring these comics based on their relationship to the core event, with my patented Zero Hour Score (Series relevance + individual merit)!
This week, it’s another core series entry week! We get some fun street-level stuff too, as well as a farewell to this era’s incarnation of the “League of Super-Heroes”!

This was an unexpected issue! Never did I expect a post-Grell “Green Arrow” run to play with the medium like this, I was pleasantly surprised! This issue is touted as being silent and without dialogue, however, the main selling point for me is that we get a divergent narrative in a method completely unique to comics. The issue starts with Green Arrow saving a mother and child before the next page splits the timeline (presumably due to “Zero Hour” time nonsense) into a top and bottom narrative. These two narratives play out the situation in different but occasionally converging methods, both occurring in panels that play out like film strips sitting vertically adjacent. Off the top of my head, the only other mainstream comic I can think that has played with this concept is “Batman/Superman” by Gene Luen Yang and Ivan Reis, from all the way in the far future of 2020. The narrative itself is pretty straightforward, with Barreto and Setzer conveying a simplistic chase scene completely in visuals. Barreto gives us some silky and dynamic action that reads very cleanly from panel to panel, and Setzer plays well with contrasting colors, giving us searing pinks and greens on top of a grittier city palette of browns and greys. The timelines eventually converge with a rather harrowing page that is strikingly rendered by the art team, showing the smaller scale casualties of big cosmic cataclysms like this: 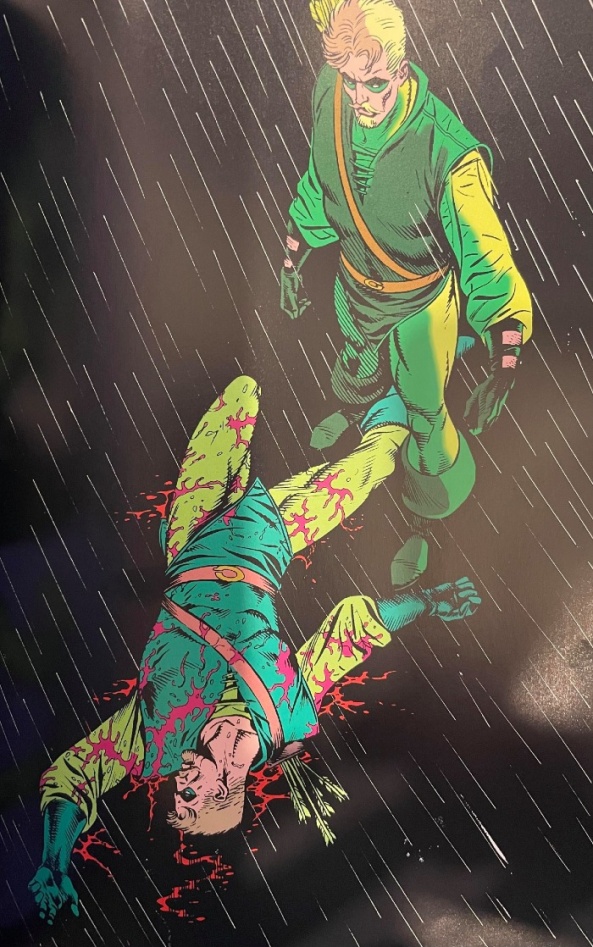 Real solid stuff! The issue fades to white due to the events of the last “Zero Hour” issue, with Batman arriving and speaking the one line of dialogue in this issue to Green Arrow: “We need you”.

Zero Hour Score: 8.2 – Really solid usage of the medium’s unique strengths, and some decent connections to the main series.

Another fun tie-in! This one again took me by surprise. On opening the issue and seeing six different artists in the credits, I did admittedly let out a heavy sigh. But this story utilizes each artist quite cleverly! Guy Gardner and a group of heroes from the Time Entropy basically time-shift to different eras whilst fighting Extant, with each era being rendered by a different artist. We start off with some very choice Mitch Byrd art as our heroes are transported to the Jurassic period, replete with a brachiosaurus and everything! We also get one of the most intimidating renditions of Extant that I’ve seen, feeling very much like an echo of a Jim Lee-drawn Magneto as he floats in the air with billowing cape and energy crackling from his hands. We move then to the old American West, drawn by Jimenez with great high-detail inks from Dan Davis. There’s some genuine character development in Guy Gardner here too, as he struggles with pain to control his new abilities, which is effective in making him a protagonist to root for. We get some early Howard Porter art next doing his best early-nineties Image Comics style. There’s a mess of hatching and cranky faces, but under it all there’s a charming early twentieth-century pulp sci-fi style. The real treat here, however, is Mike Parobeck doing some super clean Silver Age-inspired art with everyone’s favorite super-jock, Hal Jordan. 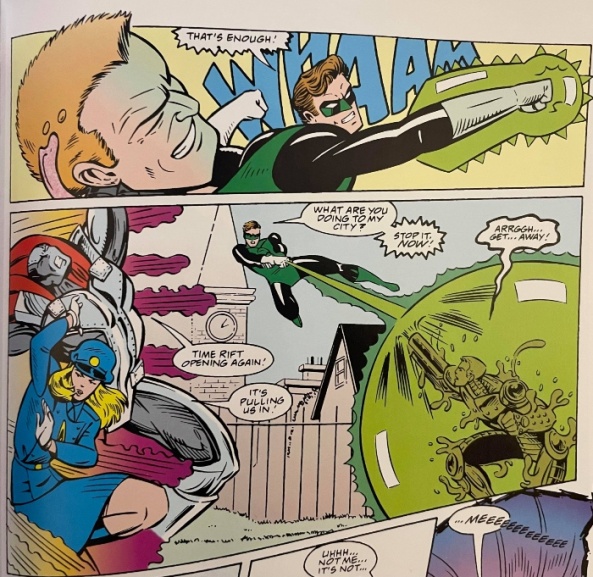 We only get three pages of this, but it left the strongest impression and felt the most visually distinct and identifiable out of all the transitions, with fun and fitting pop-art coloring from Stuart Chaifetz. Ultimately, Guy fails to stop Extant before the fade to white, loses his girlfriend who’s there because… reasons, and blips out with some very workman Porter art. All in all though, a fun issue!

Zero Hour Score: 8.6 – There are some great artists on display in this issue with a decent story to back it up. Additionally, bonus points for having the main villain in the story and leading directly into the next core series issue!

We’re nearly there, dear readers! Despite what I thought about Jurgens and Ordway losing steam in last week’s core issue, the team is still very much firing on all cylinders here. We’re dropped in with the same team from the “Guy Gardner: Warrior” issue as they all get a solid character moment, with Guy lamenting his lost love, Steel reprimanding him, and Batgirl reminding Steel to be a touch more sympathetic. Having this direct continuation a tie-in issue would have been hellish if you were only reading the main series at the time! It does, however, give me a deeper appreciation for the level of communication between the creative teams and editorial on this series, resulting in a cohesive macro narrative. The whole art team is killing it as soon as they bring the entropy fissures back, too. Jurgens and Ordway are bringing down cosmic thunder, with each character looking weighty and powerful amidst countless speed lines. Wright is switching up the usual rainbow affair for a much more energetic blue with white highlights, which lets the characters permeate that much more. Plus, Gaspar Saladino is giving us momentous lettering on the sound effects, punctuating a “chronal energy discharge” with a “SKTOOM” that’s massive, blocky, and dotted with Kirby Krackle.

The gist of the story beats from here do get a little tangled in continuity and repeat some thematic beats that were established earlier on, but there’s still a lot of fun to be had with the all-encompassing drama of it all. The entropy fissure disintegrates the Legion of Super-Heroes’ timeline (more on that later), as well as taking Steel off the board, but Extant isn’t behind it this time and is pretty mad about it. There’s a momentous scene as an aged and tired Jay Garrick manages to recruit the Spectre, a powerful Christian-themed cosmic force, conveyed with ethereal, ominous greens from Wright. Starman passes his mantle onto his sons and sets up one of the greatest long-running DC comics series (seriously, check out Starman if you haven’t!). Waverider comes back for a minute, Extant is killing all the time-travelers in the DC universe, and the Atom is de-aged to about eighteen years old (???). The big reveal to come, however, showing the man behind the curtain, the one overtaking all of Extant’s progress is… Hal Jordan? 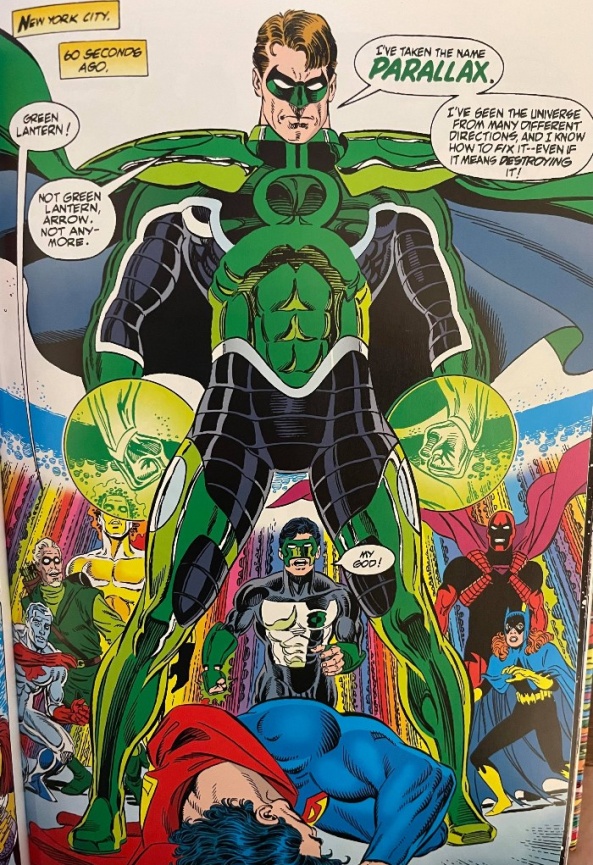 That’s right, folks, we’ve come to the point of the crossover where we straight up switch villains! To be fair, Jurgens and Ordway give this guy a heck of a re-introduction as the pragmatic new final boss, having him tower over Superman’s beaten down figure just to give us an idea of his power. He talks big about setting the universe right, saying the series name in the fantastically percussive quote: “It’s over. Your time is over. All time is over. This is Zero Hour”. Then, one final fade to white.

Zero Hour Score: 8.0 – There’s a hell of a lot going on in this issue, and some of feels a little too familiar, but it’s still big and explosive comic booking.

This issue works as a kind of epilogue to “Zero Hour” #1 and a swan song to one of DC’s most overwrought properties, the Legion of Super-Heroes. It’s a solid creative team, with Mark Waid and Tom McCraw doing some stellar emotional writing, and buttery-smooth art from Stuart Immonen and Ron Boyd. This is basically the lead-up to and expansion of the moment in “Zero Hour” #1 where the Legion fades to white and works as a way to tie up all the personal plot points between the series’ characters. The thing is because it’s “Zero Hour”, there are multiple incarnations of the same characters in the same space (which kind of contradicts a moment with “Guy Gardner: Warrior” where he is in physical pain from occupying the same space as hims- you know what, don’t worry about it). It makes for some genuinely touching moments, like Rokk Krinn reconciling with his future Time Trapper self, or Jo and Tinya getting to meet and embrace one last time before the end. There’s one weirdly fat-phobic moment when the future version of Dream Girl makes a comment to her younger self about having to “stay away from the carbohydrates” (really? That’s how you’re going to spend your last moments?) but at the very least, it’s glossed over almost immediately. All the while, Tom McCraw is doing a killer job on colors, using the rich blacks of space to make the brightly colored characters stand out, even atop of vibrant orange lava in the background. The two incarnations meet in one final shake rendered beautifully by the art team on this splash page: 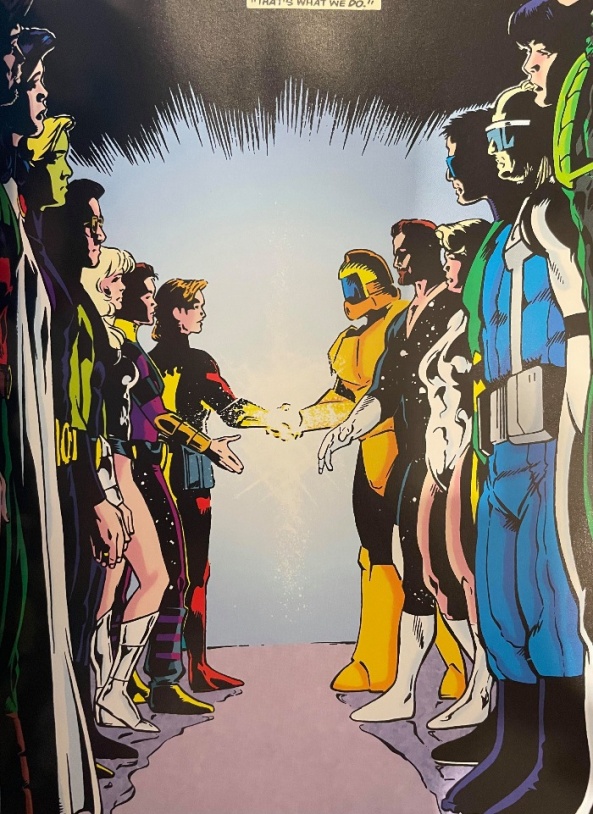 From here, we’re left with both incarnations of the original three members, fighting away the elements to fade into oblivion together as a team. It honestly left me a little misty, with Waid pacing this out just enough that even people unfamiliar with this series will feel something based on the natural chemistry he builds between characters. The final double-page splash is a beautiful reflection on the series’ biggest moments over the decades, punctuated by the rallying cry – “LONG LIVE THE LEGION!”

Zero Hour Score: 8.8 – Deals directly with some of the core plot points from “Zero Hour” and delivers an emotionally satisfying end to the Legion of Super-Heroes – until next time! 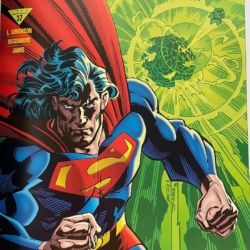 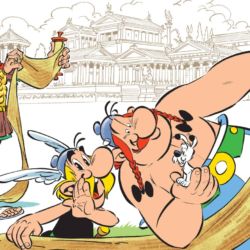