It’s been four months since the last issue of “Zodiac Starforce: Cries of the Fire Prince” and close to a year since the first issue of this 4-issue mini dropped. For something as short as this, that’s a shame. It isn’t the first series to have long delays nor will it be the last (two Batman stories that never ended come to mind) but these lengthy delays have wreaked havoc on the pacing of the series. This issue is no exception. Oh and spoilers ahead. 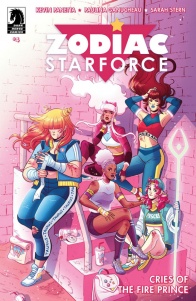 It’s the final showdown between the Zodiac Starforces and the demon Pavos! The US and UK teams must set aside their differences to defeat the demon, but a surprise attack leaves them reeling . . . and one member down.

Issue four, the conclusion to this “Zodiac Starforce” mini, is anything but a conclusion. We end in much the same place we began, with questions that have no answers and a villain that should have been cool instead being reduced to a generic bad guy. There’s a lot to unpack in that statement but first, let me talk about the good.

Paulina’s artwork, as always, is bubbly and expressive. No one is ever static and this contributes to the movement of the issue. Because this is a magical girl series, with each character having their own powers and fighting style, Paulina has the unenviable task of drawing all of that in a coherent and dynamic way. Thankfully, she succeeds at this, managing to pack plenty of details into the fore and backgrounds of many of the fighting panels while also keeping the actual fights impactful.

A punch, a kick, a flip – all these have weight within the panels. The creativity of the weird car creatures is another plus for this issue, even though they were technically present last issue. In addition to this, the visual representation of the supernatural and the character’s powers is on point this issue, specifically Pavos’. While I’m not sure what his evil power is – chalk that up to the delays between issues – he does have the power to corrupt the people he comes in contact with.

One particularly effective scene of this is when Alice, who had joined Pavos earlier in the mini, is with the stupid blob minions in the command center. The first panel shows her getting frustrated and a small crack appearing on her cheek. When she retorts that she has to do this for Pavos, allowing her rage to take full control, her eyes invert, turning black and red, her veins turning black. She then expels some kind of red liquid, maybe blood, from her hands at the panel. It’s a sequence that establishes what Pavos’ influence can do and what is going on in Alice’s head, something we desperately need in this issue.

I hinted at this earlier but this issue is rushed, both as a mini-series conclusion and as an issue itself. The cliffhanger moments of the last issue are undercut or left unaddressed, save for Emma and Leo making out. There is no addressing of Diana’s accusation that the Zodiac Starforce UK isn’t to be trusted, no addressing of Pavos’ ultimate game plan and Pavos’ personality seems to take a backseat to action. As creative as the fights usually are, there is very little use of Pavos’ power to animate technology which is a shame. There are the animated car creatures, true, but beyond that, this is one place where the fight is weak.

At least part of this is because of the delays the series has suffered, distancing us from previous issues. This distance makes the first page is rough and disorienting but when going back to issue three, it also raises more questions. Namely, why is Molly being attacked by Capricorn (I think it’s Capricorn)? This would have been the prefect opportunity to get some answers or tease out some more of the backstory of the Zodiac Starforce via a confrontation instead of sudden attacking. Also, why do they just drop this as soon as Pavos arrives? It all feels like the story they had planned was built for a monthly series and for an arc that lasts longer than four issues.

The ending of the issue even has the hallmarks of this form of monthly cliffhanger instead of a mini-series cliffhanger. Diana and Ares get trapped on Pavos’ home planet with him and we still don’t know anything about Zodiac Starforce UK. Instead of having some form of resolution on anything that really matters, we’re left waiting for the next mini-series, answerless. It’s one thing to tease new developments but without anything substantive earlier in the issue, this one doesn’t have me exited for when (if?) it returns.

In fact, that’s been the biggest problem with this mini. Instead of feeling like a self-contained yet continuous part of the “Zodiac Starforce” series, it feels like a mid-season episode of a show. They’re advancing at least three different plot threads but don’t give any of them enough focus for any of them to have any bearing on the series as a whole.

Also, I think they forgot to color Diana’s hair the same color as last issue. Here it is white and last time it was red-ish. I was very confused as to who this person was because of this.

Final Verdict: 4.5. A weak end to a good mini-series. Read it for Paulina’s art and the set up for a possible third series…if we ever get one. Until then, I’ll stick to re-reading issue #2 and the first series.