If I had a time machine, after I’ve seen every important concert, met every ancestor, gave baby Hitler to a family of art loving bohemians, and did every other noteworthy thing I ever desired, I would travel back to me from 2 summers ago, slogging through the most boring Adventures of Superman episodes ever made. I would say to younger, more innocent me, “Brian, one day you’ll watch episodes about Martians exiled for being one inch too short and where crooks use model airplanes to fool Superman.” I would thank my future self, ask about the 2020 election, and he would wink and fade away, sure to go get a job as an extra on Quantum Leap or some shit. Let’s dig in for a special ‘6 Thoughts’ edition, because these episodes are too nuts to not talk about three items each.

One consistent throughout five seasons of this series has been the parade of sad children. The first episode we’re discussing, “The Stolen Elephant,” sees a kid moved to the country with his mom, who gives him a bag of marbles for his birthday. The birthday part isn’t, on the surface, that sad, as the kid seems to acknowledge that his family has no money, and he’s legitimately happy at the gesture from his mom. But a second of reflection leads you to see this kid as someone who has been let down by life so throughly already that even birthdays bring him no expectations of joy.

But then, he goes into the barn of this new farmhouse, and finds a baby elephant. He thinks his mom secretly did this for his birthday and, not wanting to make this impossibly sad kid even sadder, she sort of goes along with it. It turns out, of course, that the elephant wasn’t a gift for her son, but a stolen circus act that was stashed in their barn for safe keeping. The kid turns out to have a steel trap of a mind, as he remembers a number that eventually leads to the crooks, and he gets a lifetime pass to the circus, as well as an invitation of indentured servitude at the pleasure of the circus, which he seems really into.

Most of this episode seems Clark moping around at the thought of not being able to find this elephant, in part because he has promised, as Superman, to bring a bunch of underprivileged kids to the circus and, specifically, to see Susie, the elephant. If considering anything Clark has done in past episodes is a thing you’d like to do, you see that either he’s in a super lazy mood or has some sort of amnesia, because he forgets all his usual tricks. Last week, he called the phone company and traced a call; this week, he completely forgets that’s an option, and never once suggests it. He doesn’t go to the pen of the elephant and follow tire tracks, or at least try to use those tracks to get an idea of the type of vehicle or direction that the vehicle went in. Couldn’t his x-ray vision pick up fingerprints, or find hair follicles? I know that Superman isn’t quite the detective that Batman is, but it seems like all of this could’ve been avoided if he tried just, oh, a little bit.

3. The tech was ahead of the ability

In the continuing story of the crooks being smarter than the first few seasons, the elephant thieves want to send Superman on a wild goose chase, so they send a ‘guided missile’ to the circus. They are to fill it with the money, press a button, and it will fly to where they want it. They do this, knowing Superman will be involved and will fly after the ‘missile.’ Well, here is that missile: 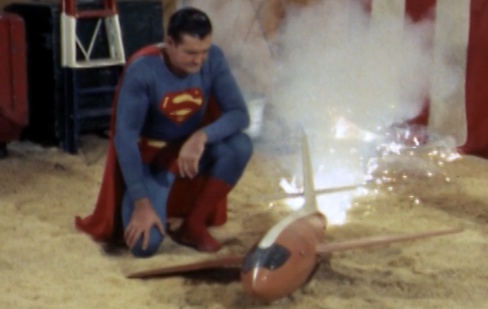 It’s amazing just how cheap that looks and is clearly a model airplane. Again, it’s a clever idea that could’ve been done so much easier. Why not send a few carrier pigeons? Even a messenger on a bicycle would solve the same basic premise, as Superman isn’t going to destroy it, but just follow it.

While this series has an alien at its center, the idea of seeing another alien on this series would’ve been unthinkable in the black and white days, but with color comes extra weirdness, and so here we are. Mr. Zero, as he is affectionately called by the Daily Planet staff, is a Martian that, for no discernible reason, chooses the Planet building to show up at when stranded on Earth. He’s played by veteran actor Billy Curtis, a little person who was in movies such as High Plains Drifter and TV series like Star Trek. He was banished for being too short – he’s only 4’1″, and everyone else on Mars is 4’2″. Despite this one inch difference, his clothes are all incredibly ill-fitting. He, of course, speaks perfect English but has no knowledge of idioms or sarcasm.

He also has the ability to point at people and freeze them in their tracks, which comes in handy when he’s ‘befriended’ by a criminal who uses the skill to rob a bank. This is never really explained, but he’s an alien, so why not?

The names of the two crooks in this episode are Georgie Gleap and Slouchy McGoon. I have no further commentary on this, but just want to celebrate the naming skills of episode writer Peggy Chantler Dick which, coincidentally, is also an amazing name.

This episode begins with Perry White telling Clark that the Department of Defense called about a UFO spotted near Metropolis. This isn’t, however, how Mr. Zero winds up a the Planet offices, which apparently is just a nice coincidence. But it begs the question, why is Perry the first call the Secretary of Defense is making? In this series, people treat the Daily Planet like a police force, a charity, and also the paper of record. It’s a bizarre decision that only gets weirder as the episode goes on.

Perry eventually meets Mr. Zero and decides “I know, I’ll give him a cigar.” He hands it to Zero who lights it up like he’s fucking Tony Soprano and starts puffin’ on the gar like a champ. Perry sees how much he likes him and gives him a box of them. Does Perry have a cigar sponsorship, and just has boxes of stogies collecting dust in his office? If not, does he see this as a way to spread cancer to a new planet? Or is he just so charmed by this dude with green hair that he wants to shower him with gifts? I don’t get it, man. 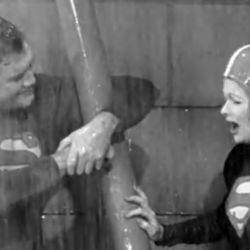 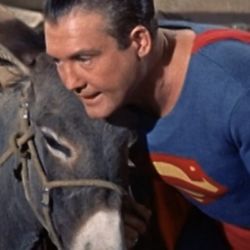 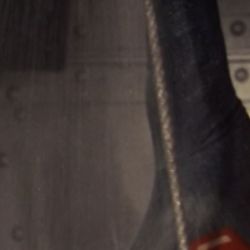