These two episodes take Clark, Lois, and Jimmy out of Metropolis, which allows for stereotypes and caricatures to run wild!

1. How did they carry around that poison?

The first episode, “The Magic Necklace,” centers around the legend of a ancient Tibetan necklace that protects its wearer from all harm. We see one of Metropolis’s seemingly thousands of gangsters breaking into the packages that the professor who discovered the necklace has sent to the museum. Each of them are full of fake necklaces, and the gangsters are trying to suss out which is the real one. So, they do what anyone would do: force their henchmen into drinking poison while wearing the necklace, and if they start to die, they give them an antidote.

This is already silly comic book bullshit, but when they show the poison itself, I burst out laughing. The poison they are drinking is literally releasing dry ice steam in a little clear cup. Did they have those paddles that breweries give you for a flight of beer, but instead its filled with poison? I’m imagining them walking into the museum with a briefcase, a crowbar, and this long paddle of steaming poison and it makes me giggle each time.

2. Good writing? Who’d have thunk it!

There’s a legitimately clever part of this episode where Clark is given the ‘magic’ necklace and, accidentally, gets himself shot. Since he can’t be like “Oh, there’s no magic, I’m just Superman,” people now fully believe the necklace is actually magic. Clark tries to think of a bunch of excuses, but for a show that traffics in shitty excuses like Jersey Shore trafficked in Italian stereotypes, these are beyond lame.

As I’ve mentioned before, half of the time Lois and Jimmy suspect that Clark is Superman. It’s very funny to me that when there is as close to empirical evidence as possible that he is, in fact, Superman, they dismiss it for a magic story. The show in its third season is a lot more self aware and silly, which actually works to its benefit most of the time, but its consistency has continued to be absolute dogshit.

Over the course of two episodes, Adventures of Superman casts an impressively wide net of stereotypes and broad generalizations. While there is no one character quite as offensive as some of the Native Americans from a few episodes ago, none of these characters are drawn carefully enough to not just be reduced to broad presumptions. Take Pedro, the Mexican from “The Bully of Dry Gulch.” While he is certainly not as cruelly conceived as he may have been, he’s still a character who has been written/cast simply because of their ethnicity, and a poorly understood version of that ethnicity. Though, I must say, I am impressed that they cast an actor that was at least a native Spanish speaker, though actor Martin Garralaga was from Spain and not Mexico, and looked to still be put through some makeup to achieve a more stereotypical look.

4. Since when does Clark care about Lois?

Everyone knows that Lois Lane has the hots for Superman, and oftentimes, the feeling is mutual. However, on Adventures of Superman, neither in his Clark Kent or Superman persona has there been any hint of interest in a romantic relationship with Lois. That is until Lois calls Clark from Dry Gulch to report on the goings on of her trip with Jimmy. Clark is listening quasi-patiently to Lois on the phone, and doesn’t seem too interested in interrupting his routine to help Jimmy not get shot dead by Gunner Flinch. But when Lois mentions that Gunner has been flirting with her, Clark slams down the phone and flies off to stop it. Apparently Clark doesn’t like the idea of anyone being shitty to Lois but him!

5. What the fuck is this town?

I live in New Jersey, and there’s a place here called ‘Wild West City,’ which is essentially Colonial Williamsburg, but for the Old West. Throughout the first ten minutes of this episode, I kept waiting for the reveal that this was all just for show; Dry Gulch is the fictional version of Wild West City or any such place. But nope! Dry Gulch is simply a town that gets its jollies essentially cosplaying as the Old West. Jimmy is able to buy some really garish cowboy attire, one no actual cowboy would’ve been caught dead in, but resembles something straight out of Gene Autry or Cowboy Curtis’s closet.

The entire town appears to be at the mercy of this obnoxious bully, a man who forces his employees to lose at cards or fake their own deaths to scare folks into leaving the town. So, while this isn’t Wild West City, it’s exactly as authentic, but not nearly as fun. This episode was a fun one to watch because it was so absurd, but also one that, in a long string of nonsensical episodes, one of the hardest to believe would actually exist. 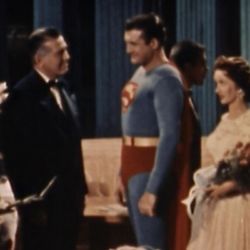 If Adventures of Superman was always as bonkers as “The Wedding of Superman,” the show would be among the most fun ever made. The campiness of the color episodes is always appreciated. Because the second episode was so fun and the first one merely fine, we’ll do one thought on “The Girl Who Hired Superman” […] 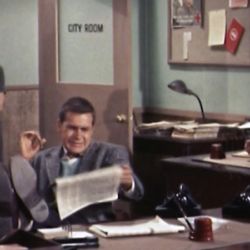 The fun season 4 continues, as the gang hangs upside down and deals with a lookalike. Up, up, and away!1. Reasonably convincing pseudo-science!In “Topsy Turvy,” one of the plethora of mad scientists hanging around Metropolis has invented a machine that, briefly, convinces the people in its vicinity that they are upside down. The machine itself […] 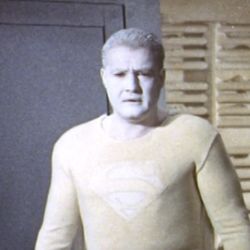