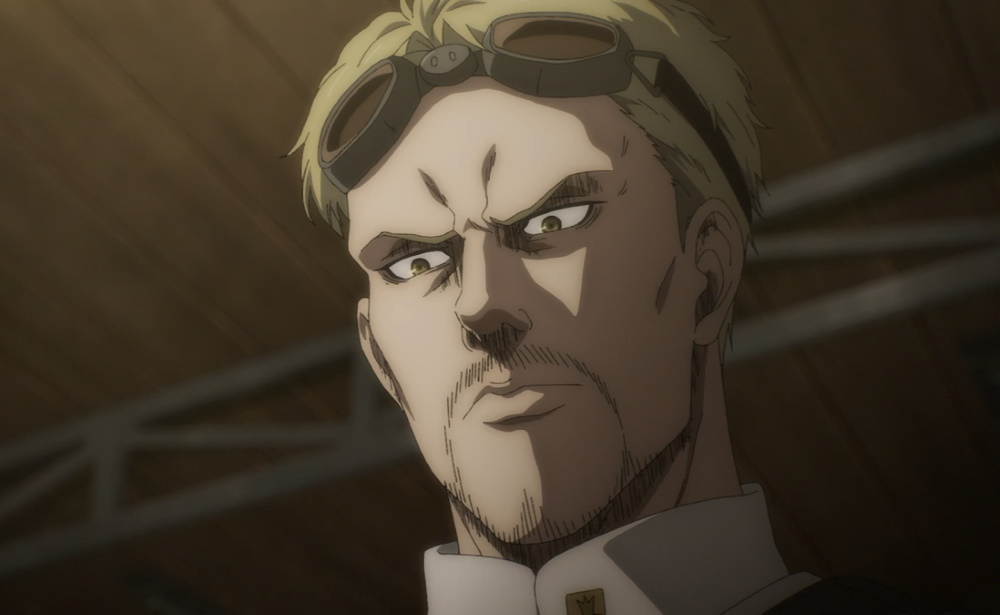 Welcome back to the titan war! The time has come to end things. We are finally watching the final season of Attack on Titan, and I got a feeling that not everyone is making it out of this one alive. If you are new to our coverage, this is the part where I explain to you that I’ve never been what you’d call a regular anime watcher, but something about this strange and at times horrifying has never failed to captivate me. This is it the last one (for a while), so get ready to charge into Attack on Titan season 4, episode 16 “Above and Below.”

1. What became of Levi and Zeke

Zeke is not in one piece. By which I mean, his lower body and his upper body are a few meters away from each other, and I’m sure there are all sorts of bonus bits scattered in between. But he’s alive, which is not too much of a surprise to me. I didn’t go so far to declare him dead at the end of last episode and sure enough he seems like he’s going to be around menacing whoever survives this episode. I can’t say the same for Levi though. It seems like the unstoppable titan-killing machine may be actually deceased; with no indication as to how many pieces he is in. What really sealed his fate was Hange Zoe noticing something was amiss. They heard the sound of the explosion, recognized it as a Thunder Spear, and shuddered. That creeped me out. I don’t think Levi is getting up from this one, and what an ignoble way to go.

Just when Zeke is ready to accept his demise though… what’s that? A titan? A fat titan with a distended belly? That’s pretty freaky and gross, plus if she eats Zeke, won’t some random Paradisan become the Beast Titan? It doesn’t matter though because she wrenches her stomach open, picks up Zeke, and SHOVES HIM RIGHT INTO HER GUTS! I assume this is going to regenerate him somehow, but that’s the last we see of Levi OR Zeke in this entire episode! We’re just left with the world’s grossest, least explicable cliffhanger ever!

True to his promise, Dot Pixis surrenders to Yelena. In fact, this entire episode is sort of the Yelena hour; she gets more screentime and we hear more about what motivates her than ever before. It turns out she’s a true believer. Yelena sees herself as the midwife to the birth of a mythic legend, two brothers coming together to repair the world. Her rants are unhinged and she’s pretty effectively built up as our sudden villain. The Jaegerists impose an armband system to indicate who drank the poisoned wine and who was loyal, and knew about the plot ahead of time. They are basically instituting an oppressive system that is identical to the one they are rebelling against. I am… not pleased that the armband imagery is sticking around so prominently. The more of Attack on Titan that I’ve watched, the more I’ve liked it, but the armbands have always struck me as lazy, evoking real world atrocities while having very little to say about them.

Our heroes, the survivors of the Battle of Shiganshina spend their time cooling off in jail. You think there’s going to be an epic escape, but they actually never get there. Their greatest asset is Armin, but he can’t turn into the Colossal Titan without doing colossal damage and probably killing his friends in the process. This is around where we get the most exchanges between my favorite ensemble. Connie and Jean ask Armin all about his brawl with Eren, and neither of them have a tough time believing his account. No part of how stories work make me think that Connie is going to be the one to put an end to Eren, but he certainly has the anger for it. Sweet Jean though, he wants to be angry but he ends up thinking a lot about Eren’s real motivation, because he’s a beautiful compassionate idiot.

You might recall Nicolo, the chef who was in love with Sasha. He finds himself locked up with the rest of the Scouts, making him an honorary protagonist. But he is really put through the ringer when Griez, his former companion, let’s loose a full barrage of honesty, and it sucks. His speech is racist as hell, and mostly fixated on how Sasha was a disgusting devil and all the ways in which Nicolo is an awful pervert for having feelings. Then halfway though his rant, Yelena walks up and shoots him dead. Her society is going to be orderly and anyone flexing their power in unapproved ways will be shot.

It’s around this point that Armin starts copiously weeping. He says it’s because of how moving Yelena’s words are, and she takes that at face value. But it’s so manic you gotta figure that he’s up to something or that he’s finally snapped. Knowing my man Armin, I’m hoping he’s got a scheme brewing.

Throughout this season we’ve seen glimpses of Pieck, the Mule Titan. She was the Warrior who seemed like the most fun to hang around with, and she’s been hot on the heels of Gaby. This is where she makes her move, and gestures towards killing Eren cold. But Eren calls her bluff, and knows that she can’t kill him without risking all of the titan powers he’s accumulated. Pieck accepts that with good cheer and surrenders/defects to the Jaegerists, promising Eren that she would deliver his enemies to him.

Gaby as we all know, can’t even pretend to be unpatriotic for a second to save her life. She is aghast with Pieck. But the laconic Warrior has a great rational or her betrayal. She reminds Gaby that they have both been on the front line. Titans are on their way out. The future is tanks, zeppelins, and battleships. And when Marley has no more use for titan powers, what’s going to become of the Eldians? Being a model citizen of the ghetto isn’t going to mean anything- it’s going to be an actual genocide. Gaby chews this over as she and Pieck are taken by Eren to a big ‘ol castle. It’s clear that Pieck is up to something though and-

THE JAW TITAN BURSTS THROUGH THE FLOOR! Eren is bitten in half by Galliard, almost killed, but he manages to transform into a titan at the last second. It turns out that Pieck’s well reasoned arguments were a lie! “I don’t trust Marley, but I do trust the comrades I fought beside,” Pieck says. Which sounds like some bullshit to me. I’ve never served in any military, but I don’t find that argument nearly as convincing as Pieck’s earlier points. Call me cynical, but I think there’s a pretty well established history of Imperial governments leaving those who served them out to dry. I believe this as a character choice that motivates Pieck, but I don’t think it’s a good moral to end the story on. We will see if Pieck’s trust is validated.

Either way, her plan certainly has merit. It’s all been a setup! It’s not just an infiltration operation with her and Galliard, the whole damn air force is here. A fleet of airships, commanded by Reiner arrives! Eren, inside his fleshy mecha does that anime thing where he makes eye contact with his foe, who is thousands of feet in the air and behind a window. But they can see each other and shout at each other. Metaphorically, they only have eyes for each other. And… that’s it! That’s the cliffhanger, the end of this half of a season. We’ll have to wait for the final batch of episodes to see the final battle.

That’s it titan fighters, the end of the road for now! Where does that put us? Levi is presumed dead, though I’d be surprised if that was truly the end of his story. Zeke is definitely NOT dead, but his status will not be understood until we figure out just what gross titan lore he’s dipping into. The remaining Scouts- Hange Zoe, Jean, Connie, Armin, and Mikasa- are all imprisoned by the Jaegerists, along with Nicolo. Yelena has conquered Paradis with Eren, and now rules over the whole island, including the short-lived military leader Pixis and Queen Historia. Eren is ready to throw down with all his enemies, and they are all rising to meet him. A force of Marleyans, led by Reiner, is ready to end things.

But we are not because we are out of episodes. I found this stretch of Attack On Titan to be a little baffling, constantly thrilling, and totally messed up. I’m pulling together my feelings about the show as a whole, and I am reflecting a lot about the criticism that I’ve seen in the wild. But I would rather wait until I’ve finished the show before I offer a unified theory of the story. In the meantime, I still love this dark, weird little anime, and I thank you for taking the journey with me so far. I’ll see you at the end of the end! 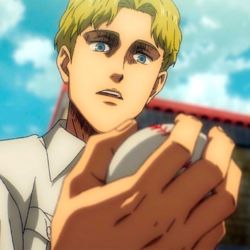 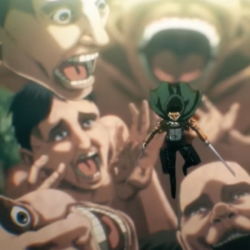 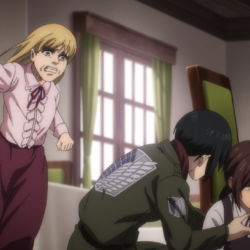 Five Thoughts on Attack on Titan’s “Children of the Forest”