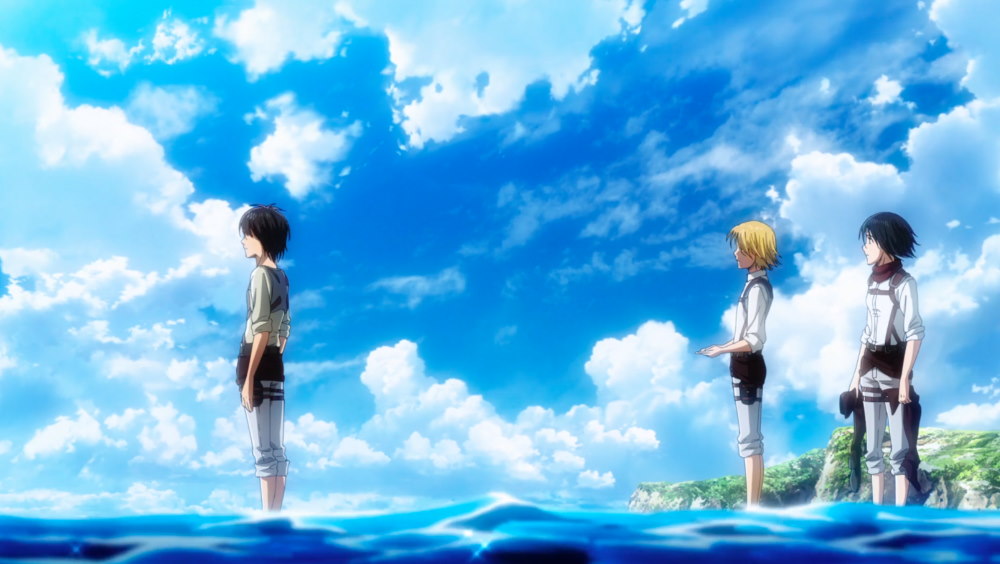 Welcome back! Are you prepared?! Assuredly, you are not. The walls stand strong, but we no longer need hide behind them. It’s time for another episode of Attack on Titan. This is the part where I let you know that I am very much not a regular anime watcher but that this strange and at times horrifying show continues to captivate me. We are continuing on through the third season, as part of our 2020 Summer TV Binge and beyond. Let’s get into it! Buckle up your Omni-Directional Movement gear. Lets swoop into Attack on Titan season 3, episode 22, “The Other Side of the Wall.”

1. Currently available public information
We start with a debate. That may sound tedious in other contexts but honestly, debates have been what Attack on Titan season 3 have done best. Specifically, military command needs to decide whether or not to publicly disclose… everything they have learned so far. I’m pleased that the resident grandfatherly cowboy and wielder of the best name in fiction, Dot Pixis, is the one who is pro-disclosure. He says engaging in more cover ups would make them as bad as the previous (and he implied cowardly) kings. The final choice lies with Historia (who I still think of as Christa), but she does the right thing.

I really appreciate Historia’s attitude here. She doesn’t think of it as a gift, or even responsibility. She looks at it as reparations. The king stole people’s memories; telling the truth now will just bring them back up to date and replace their old, stolen truths with current valuable ones. I never really doubted Historia as a leader, but it’s nice to see her in action. Her money is where her mouth is.

2. The fourth estate
We see how all of this plays out in a lunch meeting between Hange Zoe and Levi and the two journalists we met earlier this season. OK, in the interest of full disclosure, I had no idea who these guys were. I watched that half of the season a year ago! But I could feel the show telling me that I knew these guys so I looked it up and sure enough, we met them way back when Kenny felt like a big deal. It’s just so funny that this season is ending with lunch meetings when so much of it has been horrifying warfare fought in pools of mud and blood.

This is also where we get a temperature check with how the wider populace is handling the truth bombs. Essentially, it’s a split reaction but the common narrative is now that Bertholdt’s attack on the wall five years ago was the start of a hostile invasion, and that the people are rallying. A critical component of fascism is having an enemy to oppose. The monarchy and military will remain strong as long as people remain scared of Marley.

3. Passion of the Floch
LOL, this jabroni. Floch was the only survivor of Erwin’s final charge and in the intervening days his balls have gotten huge. When he was the junior most member of the Scouts, you could see he had it in him to be a raging asshole, but now that he’s surrounded by people who weren’t part of a traumatic battle, he’s letting it all hang out. His first responsibility is to tell Hitch that her beloved Marlo died like a punk. She clearly was just looking for some commonplace assurances, but Floch is now the totally radical dude who tells the truth no matter how tactless it comes across. Good for you Floch (not really, get your act together).

He’s also ready to throw down with Armin for having the audacity to be alive while Erwin is dead. And Armin is even inclined to conceded that point. Survivor’s guilt is a hell of a thing (unless you’re Floch I guess). Eren steps to him, and it almost turns into a whole thing. Mikasa tries to calm Eren down, and Floch calls her the adult in the room which is how you know things have really gone off the rails. But the kiss of death on the whole interaction is when the final deescalation is done by Jean, who could spell deescalation if you paid him to. Floch storms off in a very “you haven’t seen the last of me!” sorta way, so my assumption is he’ll be back to make trouble next season.

4. Wookie medal
Things get very A New Hope as the monarch gives medals to the survivors in a big ‘ol ceremony. No John Williams plays, but that’s not on me. When Eren receives him medal from Queen Historia, it triggers a pretty psychotic looking memory of his dad threatening her dad. This is tough to see because we just spent the last two episodes doubling down on the idea that Grisha Yaeger was a good guy, but clearly that’s not a universally accepted truth. Eren and Historia are friends, but the beef between them is real.

On a side note, I just learned that the guillotine they are using to kill the titans is called “The Executioner From Hell” and that is metal AF.

Also, as long as we are talking medal ceremonies, who is the Chewbacca of the group? It’s got to be Sasha right? Always thinking with her stomach and ripping arms out of sockets when she loses petty games. But I’m open to contrasting takes.

5. Beach episode
It is my understanding (mostly from Avatar the Last Airbender) that “beach episodes” are traditionally filler episodes that don’t do much to advance the plot. If so, this has got to be one of the most momentous beach episodes in anime history. Because this is it, right? I mean, I said something like that when they got to the basement, that’s been their destination for so long. But the basement was just the goal of the mission. Their dream, the thing our heroes have wanted to pursue more than anything, is to see the world beyond the walls. And now they have. Specifically, they get to the exact expanse of beach where the Owl rescued Grisha and sent him on his mission.

Beach episodes function as character pieces. So this seems like a great chance to check in with our heroes. All of them are blown away by seeing the ocean. Armin immediately goes off collecting shells, so excited is he to see something he has never seen before. Connie and Sasha splash each other like little kids; they have irrepressible spirits. Jean is a grouch. I think he’s having a good time, but he mostly complains about how salty the water is. Hange Zoe goes straight into science mode, trying to figure out the properties of salt water and what it all means. Levi frets, worried that his squad is gonna like, step on a jellyfish or something. (Not that he knows what a jellyfish is, he just knows there’s gonna be something poisonous and that his idiot children will try to play with it). Mikasa is her intense self, but once she puts her feet in the water, even she cracks a smile.

But what of Eren Yaeger, the hero of our story? We recently learned that he feels completely dead inside. His dreams are done. Now he’s just living for the memory of the love he once felt for Armin and Mikasa, trying to keep their hope alive. Eren is not playing on the beach. He looks out beyond the sea. He gets that Marley is there, senses the danger more than anyone. He’s lived it. So while the rest of the cast looks back on their struggles and takes a moment to enjoy the present, Eren only has his eyes on the future. He knows that next season will bring war. And he is grimly determined to win it.

That brings our coverage to a close. I have been following Attack On Titan every summer for a few years now and for the first time since I’ve started, I am all caught up. There is no season four- yet. But like Eren, I know it is coming. And I too am grimly determined to win. I will see you on the front lines dear reader. 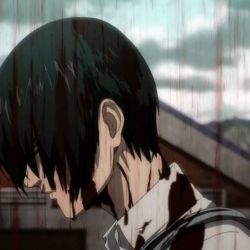 Welcome back to World War Titan! The time has come to end things. We are finally watching the final season of Attack on Titan, divided up into three parts. And it really looks like maybe this is the one where our heroes manage to turn everything around! If you are new to our coverage, this […] 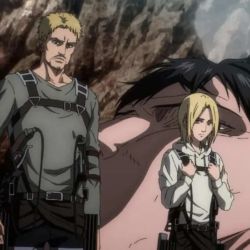 Welcome back to World War Titan! The time has come to end things. We are finally watching the final season of Attack on Titan, divided up into three parts. And who knows maybe this is the one where our heroes manage to turn everything around? If you are new to our coverage, this is the […] 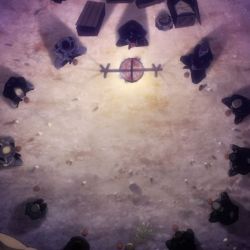 Welcome back to World War Titan! The time has come to end things. We are finally watching the final season of Attack on Titan, divided up into three parts. And it looks like just maybe, this is the one where our heroes manage to turn everything around! If you are new to our coverage, this […]