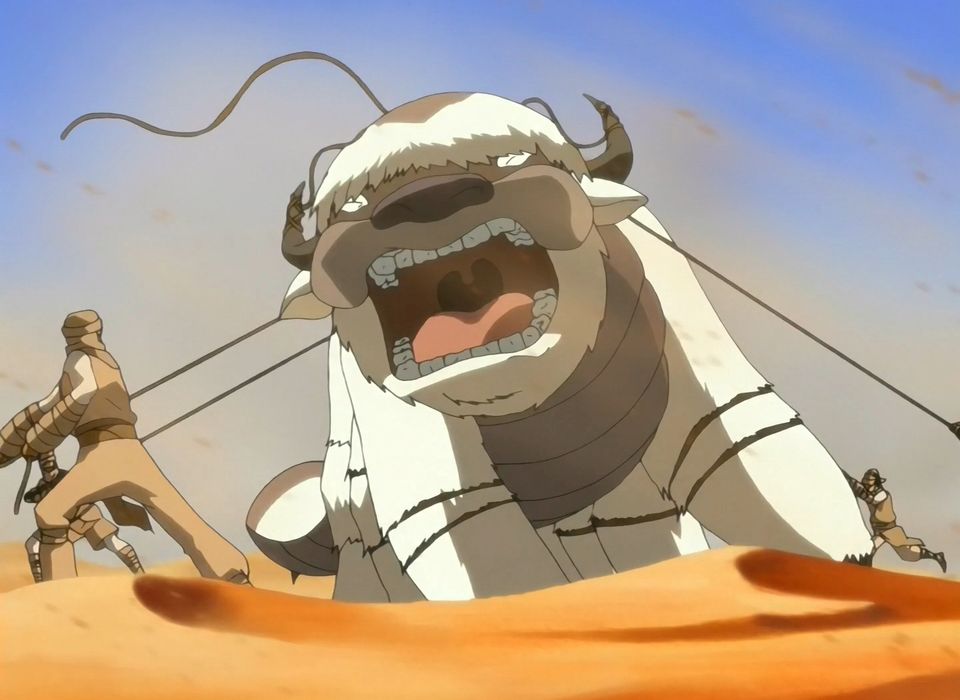 Welcome back for another weekly review of Avatar! This week, we finally find out what Appa’s been up to for the last few episodes. Read on to see how the episode holds up.

1. Spotlight on Appa!
I’ve written about this in the past, but Avatar’s treatment of animals is really something special. I don’t know many other shows that could spend an entire episode following the journey of a non-anthropomorphic animal and make it not only engaging and important, but also one of the darkest episodes of the show. This episode is a direct follow-up to the Momo spotlight last episode, and I also see it as a spiritual successor to the Appa/Momo subplot way back in “The Swamp.” All the same principles that those stories stood by are magnified here: Appa has a personality as a gentle giant, he has a goal to escape his captors and reunite with Aang, and his circumstances throughout the episode test his personality as he strives towards his goal. That’s all you really need to tell a compelling story.

I’d even argue that because Appa has less complex thoughts than a human, the episode becomes more emotional than most. Here we have a gentle creature who is literally incapable of immorality or betrayal or spite, so every time he gets captured or stung or can’t find food, we feel deeply for him. In fact, the Fire Nation circus scene won the episode a Humane Society Genesis Award. The world can be a cruel place for a sky bison as pure as Appa.

2. Filling in the blanks.
The episode starts out four weeks ago, when the sandbenders took Appa outside the library, and fills in the gaps literally between the scenes of the last six episodes. Just as Aang goes off into the desert searching for Appa and creates a mushroom cloud out of rage, Appa passes out from poison darts, close enough that he can see the cloud. Appa even passes the same locations the crew did, like the giant buzzard-wasp hive, but he’s always just too late to meet up with them.

I’m sure there are less obscure references, but it reminds me of the ending of The Young Girls of Rochefort, or the entirety of Under the Same Moon. It’s infinitely frustrating to know that he was right there, so close to reuniting but always the slightest bit too late. And to the audience, it makes us root for Appa even stronger.

3. Kyoshi Warriors vs the Azula Three!
We just saw Suki a few episodes ago, but here we finally see the proper return of the Kyoshi Warriors. Due to their worship of Avatar Kyoshi, they feel duty-bound to help reunite the Avatar with his animal companion. They’re still every bit the humanitarians that we’ve come to know, and their calm resolve to help ends up saving Appa when he’s at his lowest point, in pain and afraid of any humans.

And then the Fire Nation attacked. Azula, Ty Lee, and Mai show up for a short fight — notable, I think, for the fact that they’ve previously only appeared when they’ve been the primary antagonists of an episode. This sort of cameo-like appearance isn’t out of line with the episode, though. Every major character does have some sort of small appearance, but it’s always just that. In this episode, it’s Appa’s world and everyone else is living in it.

Unfortunately, due to this battle’s short amount of screen time, we never see how it concludes. To be continued…

4. “Choose well. A sky bison is a companion for life.”
As Appa flies around and visits the Eastern Air Temple (!), we get some adorable flashbacks about his life before Aang, as well as their first meeting. First off, it’s great to see another air temple, both past and present. Comparing it to the past air temples, this one is much larger, with three huge interconnected mountaintop structures. It also has a distinct light blue and gold color scheme for its roofs, and has a significant outdoor courtyard-like area. Flashing back forward to the present, the air temple has clearly been devastated by the Fire Nation attacks. While some structures are merely cracked instead of collapsed, everything has a fine layer of soot and dust over it.

Back to the content of the flashbacks, Aang and Appa’s designs are both adorable — eyes too big for their heads and heads too big for their bodies. We truly get a feeling for how deep their bond is, with both expecting to spend their entire lives together. We also get a deeper meaning behind the two being stuck in the iceberg with one another. Truly, Aang and Appa are the only constants in each other’s worlds, making this whole separation all the more heartbreaking.

5. Introducing Guru Pathik.
Back in the present, we meet a peculiar figure: Guru Pathik! Avatar’s peoples tend to be based on real-life cultures: the waterbending tribes are based on Inuits, the Earth Kingdom as a whole is based on mainland China, Ba Sing Se takes after parts of China and North Korea, and the Airbenders are based on Tibetans. Most of this world is based in Eastern styles of architecture, culture, and philosophy, so it’s about time we got an Indian-inspired character.

I’ll have more to say when he comes back in a few episodes, but for now, suffice it to say that the Guru is easily one of the most spiritual characters on the show. Not only does he have the patience to earn Appa’s trust after his weeks of abuse at the hands of humans — Appa even took time to warm up to the Kyoshi Warriors that he already knew — but the Guru also spouts off about a dozen lines about energies and visions and the strings that connect us all. Not to mention, he’s able to help Appa hone in on a spiritual connection to Aang that guides him back to his lifelong companion. There’s clearly something special about this guy. For now, though, Pathik was only the last short stop before Appa finally arrives in Ba Sing Se.

What did you think of the episode? Did you enjoy watching an episode all about an animal who doesn’t talk or act like a human? Did you think it got surprisingly dark? Thoughts about the Guru? Let me know in the comments! 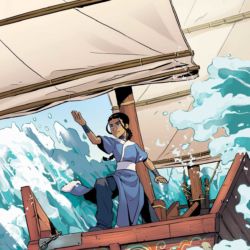 “Avatar: The Last Airbender—Katara and the Pirate’s Silver”

“Avatar: The Last Airbender” takes a journey back to the era of the original television show in the one-shot ‘Katara and the Pirate’s Silver,’ making a comic that is unlike any “Avatar” comic that has come before it, and yet something that captures a specific spark from the show.Created by Bryan Konietzko and Michael Dante […] 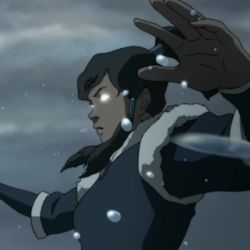 Welcome back for our final Book One review of The Legend of Korra! The war is at its climax, so let’s get into it!1. General Iroh shines!After his exciting, fan-pleasing introduction last episode, General Iroh gets a bunch of scenes to shine in these two final episodes. He seems to be proficient at anything and […] 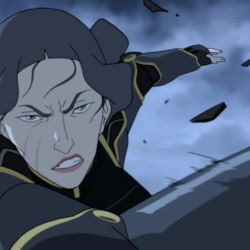 Five Thoughts on The Legend of Korra’s “Turning the Tides”

Welcome back for this week’s Korra review! Everything is coming together as we head towards the season finale. Let’s dive in!1. Action action action!!I criticized last episode for skimping on the action, speculating that it might have underwhelmed due to budget reasons. Well, I think this episode more than made up for it! There’s wall […]