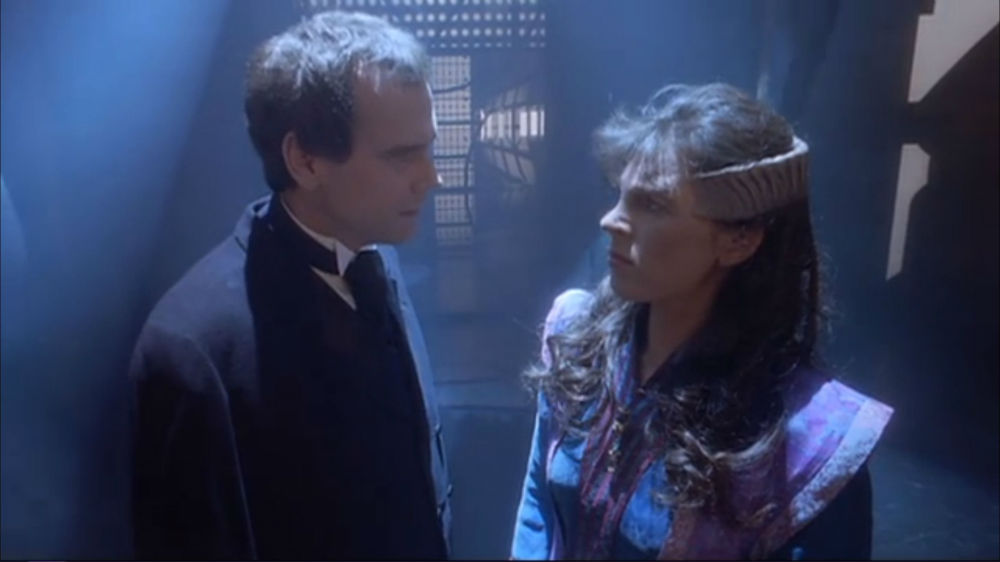 G’Kar finds himself in a desperate and difficult situation, Shade makes an inexplicable appearance, and Kosh doubts. Welcome my friends. This is the story of the last of the Babylon stations. The year is 2259. The name of the place is Babylon 5.

1. Heavy are the Arms that Wield the Manacles

I don’t know how to feel about this episode. It’s a heavy one, a tough one, and is pretty uncomfortable to watch. Much of the episode centers on Delenn and the trial she is being put through by Kosh. Or, to be more precise, by Sebastian the Inquisitor on behalf of Kosh. It’s a situation that, unlike season one’s Delenn in peril sequences, is a far more complicated and personally rooted situation. Delenn enters willingly, though terrified, with full-knowledge of the risks and how to remove herself from danger should it become too much. The catch is that pride, that beast capable of driving one to even greater depths, pride will keep her shackled and at the whims of her inquisitor.

And that word is perfect for Sebastian. He is the one who asks the questions. He is the one who was dispatched based on the assumption of possible guilt. He is the one who is charged with torturing the accused until they provide the right, acceptable, answers. But does that make the eye with which we watch him torturing Delenn less voyeuristic? That’s where the episode feels uncomfortable beyond the intentional discomfort. It’s clear we’re meant to be unsettled. The lack of music, the circling motions and repetitive sounds and tight close-ups in a dimly lit room, it builds an atmosphere of tension and fear, driven home by Wayne Alexander’s chilling Sebastian.

But was it necessary? Both in-universe and out? It’s exhausting to watch and as close to a horror film we’ve gotten thus far, though it is a far cry from the likes of Hellraiser. I think, tentatively, yes.

It was a trial in the ancient sense. A difficult, seemingly impossible and confusing task which acts as either a test of faith or to expose the person beneath the person, revealing not “who you are” but what you are willing to do when faced with painful, difficult choices in which there are no easy answers. The reason Delenn could not have the question explained directly is because it is easy to provide the answers people want to hear.

Does that make this right? I don’t know, and I think that’s the best answer I can give.

Sebastian’s question, and the subsequent “correct” answer, fascinates me. Anyone else? No? Because, despite all my qualms surrounding the actual process, it’s, at its heart, a philosophical question rather than a literal one. “Who am I” is one of those age old questions that gets redefined based on the situation you’re in and, what Babylon 5 is arguing is that, ultimately, who you are does not matter as that is always a function of others. OK, that’s not entirely accurate. I don’t believe this approach applies broadly in the show but it does apply to Delenn and the Rangers specifically. One cannot think of themselves as special to fight their war, as that lets ego into the mix, and threatens to make the fight about them, to let pride rule over right. But on that same token, they must believe that the work itself is special and that they have been chosen to take it on.

Lennier says at the start of the episode:

“If you do the right thing, for the wrong reasons the work becomes corrupted, impure, and ultimately self- destructive”

This statement applies directly to the test and I have a feeling will be prophetic.

Garibaldi going so far for G’Kar this week comes, not necessarily as a shock, but as a mild surprise. He’s always been far more chummy with Londo and could easily crack down on the weapons distribution in the same way as he did to the Centauri. . .but he doesn’t. Instead, he gives G’Kar a site off-station to do transfers of illegal weapons, ones he bought from ol’ smoker voice, and has a real heart-to-heart with him. It shows how much has changed since war broke out. That dirty look from Garibaldi wasn’t just for the episode, it materially affected the way his character operates. I love that and the whole conversation they had was the best. These are the moments that show just how damn talented JMS is at crafting characters and emotions and how freaking fantastic this cast was.

How many times is G’Kar going to have to fight off others who want his position? Last time it was a clear coup in the making but this time, it’s born from the fear of the narn who almost certainly is the same actor who played the Drazi Ambassador. I don’t really have a lot of thoughts on his stuff other than it’s a great showcase of what G’Kar has been up to, what he is willing to do, and how he has grown as a leader since season one or even early season 2. He seems more defeated now but that is because his rage has turned to grief, one that he can take out on Vir in another fucking fantastic scene from the two of them on the elevator, and because he is more focused than ever on keeping his people alive and fighting.

Can we also talk about how fucking wild it is that Sebsatian is Jack the Ripper? This is a universe where Jack the Ripper stopped killing because he was abducted by aliens and has spent four hundred years both serving penance for his awful murders but still getting to indulge in his desire for torture. Of all the strange things B5 has done, this is the strangest by far and, somehow they made that choice thematically relevant? I also don’t know how I feel about that but it’s a point to consider. Jack, or, Sebastian, became the thing he railed against, absorbed in his own belief that he was chosen and righteous when in reality he was a monster who took advantage of the vulnerable.

Why is this the image the episode chose to end on and not Delenn? Because he is the cautionary tale. He is remembered not for his self-identified cause but for his actions, under a name not his own, given to him by others. Moreover, not only did he not do the right thing, he did the wrong thing for the wrong reasons. . .if that makes any sense without trivializing things, and until he had that violently pointed out to him, he could not be convinced that his harm was anything but positive.

I’m still not sure how I feel about this choice. I’ve said it a lot and I think ending with it is right. Sometimes there are no easy conclusions and even when there are, perhaps that’s when we have to most be wary. Is that the lesson of the week? Or am I way too far up my own ass? Let me know in the comments, I’d love to get a second opinion and some fresh eyes on this.

That about does it for now. Join me again in a week for the season two finale and the final episode of our 2019 Summer TV Binge on the station that wraps humans and aliens in two million, five hundred thousand tons of spinning metal . . . all alone in the night.

Vir: “I’m sorry. I wish there was something that I could do, but. . .I tried telling them, but they wouldn’t listen.

G’Kar: “Then I cannot forgive. 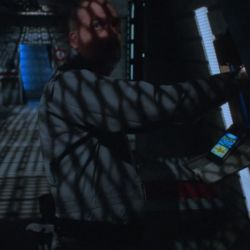 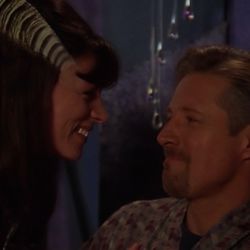 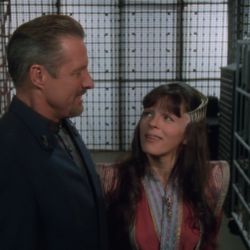