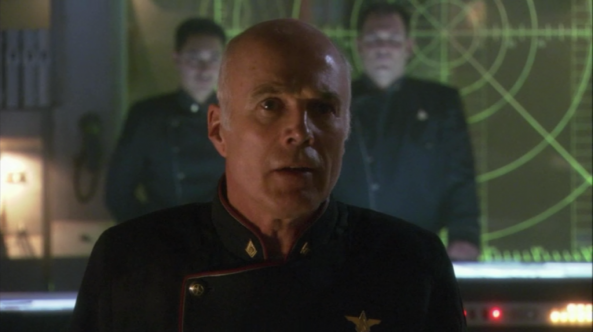 Without a strong leader, everything is scattered. This, perhaps is where the title of Battlestar Galactica’s first episode of the second season, “Scattered”, comes from.

This episode starts immediately after the action of the prior season’s finale. The recap is brief, but effective in reminding us where we left off. A lot has happened since the Cylons basically destroyed Caprica and her inhabitants, and the humans we’re following are simply scrambling to survive. We’re reminded of the mythology developed in season one, Kobol and Starbuck’s mission to retrieve the Arrow of Apollo, and how the arrow will lead the surviving humans to Earth. President Roslin is incarcerated along with Apollo, because of their devotion to locating this arrow, Six is revealing her and Baltar’s baby to the nervous scientist, and Sharon shoots Adama. Oh yeah, that was a defining moment of season one. Sharon shooting Adama. Phew. All of these changes wreak havoc on the member’s of Galactica’s crew.

No, not the movie with Keanu Reeves and Sandra Bullock, but the speed and pace of this episode, which is brisk. It carries its viewer along at a breakneck pace, which helps us get involved and invested in what is happening in season two. No time to breathe, we’re thrown right back into the action. Usually, for me, older shows tend to drag a bit, as our modern attention spans get shorter and shorter and we expect more and more action, but this episode holds up well, as do others in this series.

At this point, the crew of Galactica is realizing that people they have known for years, have grown close to over time, and have formed personal relationships with, are in fact, Cylons. Imagine a person you’ve fought beside and relied on shoots your Commander in cold blood. What do you do? How do you deal with that? Tigh deals with it by beating Sharon, the Sharon that shot Adama, but he can’t kill her. How would your humanity let you kill someone you’re emotionally attached to? Someone you saw as human only hours ago? This is a storyline I’m excited to see develop again over the course of the show. How do we treat those that betray us?

Let me start out by saying that de-aging Adama and Tigh is almost laughable in this episode. Man, slapping some hair on Tigh just makes him look the same age, but with hair. And Adama? Giving him a mustache does not make him look any younger. At all. It’s almost comical now that I’m rewatching this. I imagine the “Battlestar” budget did not allow for much here. But anyway, we do see the two men at their first meeting. And we see how Adama saved Tigh from a life of self-destruction, a life he now says Adama should not have saved him from. While Adama is lying unconscious, Tigh tells his friend and commander that he never should have brought him back to service, because he never wanted to command. Which takes us to the final point of this review…

Some people are leaders, and some are not. It’s not always obvious who will make a good leader, but this episode is all about those leaders, and those non-leaders. Fear will lead a person in charge to make rash decisions, poor decisions, as Tigh does when he rushes out of harm’s way, only to lose the rest of the fleet. It’s the same with the crashed raptor crew, they rush out because of fear, only to have to backtrack because of this, as does Tigh and the Galactica. But, this is when true leaders shine, as the Chief shines when backtracking to the crashed raptor in order to collect forgotten medical supplies. Despite Tigh’s reluctance as a leader, he does backtrack himself, and finds the rest of the fleet, with the help of his crew. People listen to the Chief, and they listen to Tigh. People listen to leaders, good or bad.

At the start of season two, the human race is scattered across the galaxy, and individual groups of people are scattered across in their own lives. It’s up to those leaders to gather them back together.

1. This episode is really all about RoslinRoslin, Roslin, Roslin. From the very start, we know she’s dying; it’s cancer and it can’t be cured, especially now that medical care is at a bare minimum for the fleet. We do get the chance to glimpse into the President’s life on Caprica, if only briefly, as […]

There was a point in season 2 where my excitement about Battlestar waned, but this two part episode really picked it back up again.1. ApolloOur CAG and Commander’s son is frequently on the periphery of the action throughout this series. He may be involved in the plot, but we’re never following his story; he is […]

1. Can’t we all just get along?“Pegasus” left us hanging with battle imminent between the Galactica and the Pegasus, but due to a set of serendipitous circumstances, the attack is called off with Cain and Adama agreeing to meet on neutral ground, Colonial One. In a meeting between the Admiral, Commander, and President, it’s clear […]