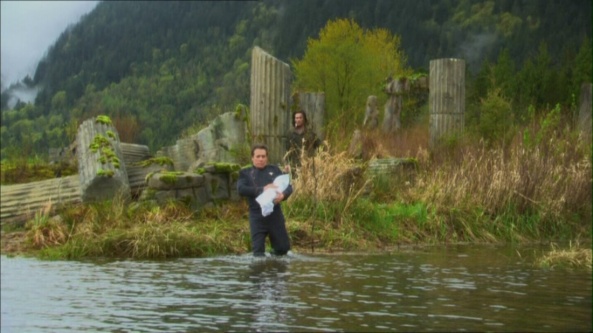 Season Two is the season where we start straying from the decks of Galactica herself. I forgot this much action takes place off of the ship; I’m not always a fan of off ship missions, they tend to change the scope of the story, and I prefer a space story. But, the action moves quickly when we move back and forth between the Galactica, Caprica, and Kobol. Plus, we get to see characters out of their normal habitat, which leads to some deeper character development.

2. Where art thou Commander Adama?

This guy says ZERO words in this episode, but Adama is a major influence on most of our characters, and on the plot itself. To start with, Baltar has another vision, this one starring Commander Adama himself, drowning a baby. But it’s not just any baby, it’s Baltar and Six’s baby, or at least the one Six showed him in a vision. Adama recognizes this child as the fulfillment of the prophesy, “this is the shape of things to come.” Vision Adama states that there’s only one thing to do then, and that one thing is to drown the baby, and so he does. I’ve forgotten a multitude of details from this series so it’s interesting to see how the build up of turning Baltar against humans begins. I’m curious to see if 14 years will change my point of view on Baltar and his state of mind. Besides driving Baltar’s plot, Adama’s lack of presence affects his second in command, Tigh, as well as his son, Apollo. Both know Adama is a better man than both of them, and will punish them accordingly when he recovers from his injuries. We see Saul and Apollo make mistakes, and they’re floating in the wind without Adama to pull them back to Earth, or Caprica, if you will.

Remaking Starbuck as a female character, and leaving the characteristic cigars of the male 1970s Dirk Benedict Starbuck, is one of my FAVORITE small, but critical, elements of character building from this series. She and Helo are still on Kobol, dragging that arrow of Apollo around, trying to get back to Galactica, and since they’re having trouble doing so, we get some time for…character development. A visit to Starbuck’s apartment shows us it is filled with paintings, paintings of her own creation. She tells Helo she never missed her old crap, and while everyone else is fighting to get back what they lost after the Cylon attack, she’s just fighting because it’s the only thing she knows how to do. One of those wall paintings is going to pop up again later; my memory of the details and significance is foggy, but I know it will be back.

4. Want to get shit done? Call a teacher

President Roslin was a teacher and I would dare to say that her strongest characteristic is being calm under pressure, no doubt a skill necessary when managing a room full of kids. When the Cylons board Galactica and Dee is involved in an attack, she can’t speak when questioned by Billy; she’s in shock. So Roslin tells Billy to use Dee’s rank. It works. The freaking marines are unsure of what to do when their way to the infirmary is blocked, so Roslin calms them down and helps them think the problem through. Once the Cylons are defeated, Roslin calmly accepts that she must go back to her cell; it’s the rule and she will follow it. I forgot how calm Roslin is during so many moments of this series. It’s impressive.

5. Flattery is being called Ned Stark

Now on Kobol, things are going poorly. The Chief has just lost a man while trying to save another, and when he and Cally return from their mission, their dying man is too far gone to save. I don’t know the dying man’s name, because he’s there to die and show us what kind of man the Chief is, so I’m sorry for the lack of detail here. This nameless man is dying, slowly and painfully, and the others don’t think he should have to suffer. So, they suggest using painkillers to ease, and quicken, nameless man’s death. The Chief is not into this solution, killing another man as a kindness. The Chief is overruled, but he won’t let just anyone administer the deadly dose, he does it himself, Ned Stark style. If there’s a hierarchy of respected characters on this series, the Chief is second only to Adama.

1. This episode is really all about RoslinRoslin, Roslin, Roslin. From the very start, we know she’s dying; it’s cancer and it can’t be cured, especially now that medical care is at a bare minimum for the fleet. We do get the chance to glimpse into the President’s life on Caprica, if only briefly, as […]

There was a point in season 2 where my excitement about Battlestar waned, but this two part episode really picked it back up again.1. ApolloOur CAG and Commander’s son is frequently on the periphery of the action throughout this series. He may be involved in the plot, but we’re never following his story; he is […]

1. Can’t we all just get along?“Pegasus” left us hanging with battle imminent between the Galactica and the Pegasus, but due to a set of serendipitous circumstances, the attack is called off with Cain and Adama agreeing to meet on neutral ground, Colonial One. In a meeting between the Admiral, Commander, and President, it’s clear […]