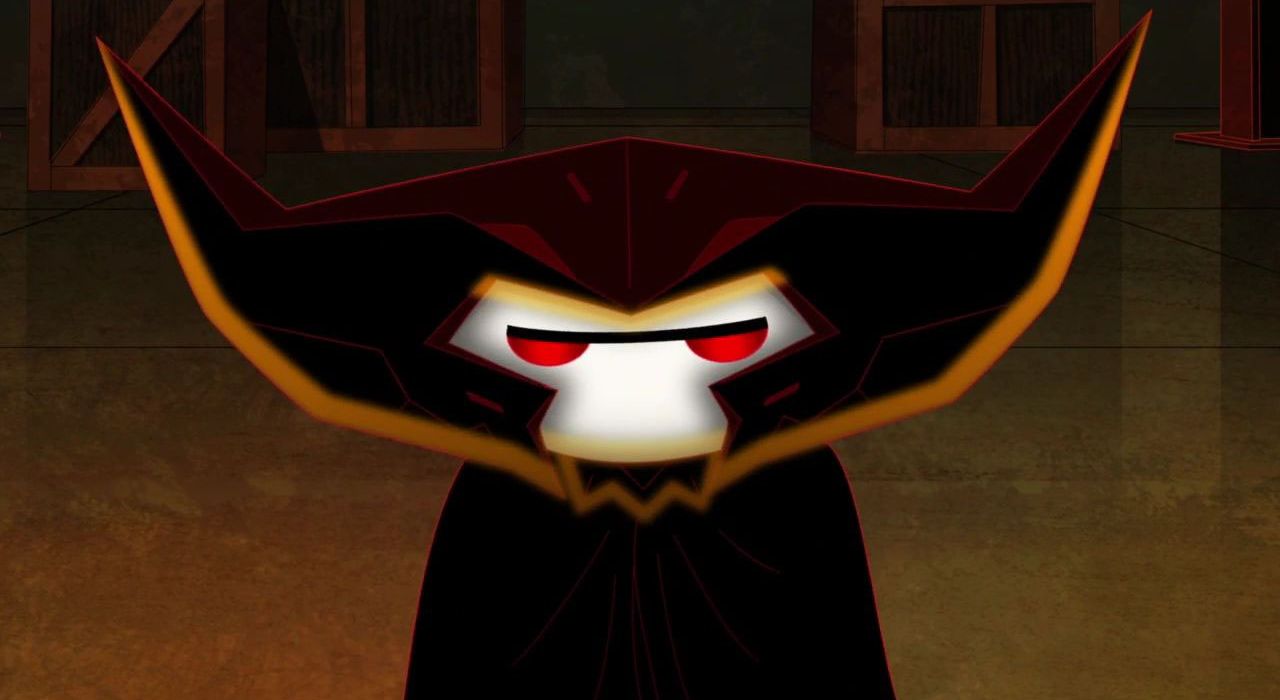 Today we’re looking at the latest two Big Hero 6 episodes, “Mini-Maximum Trouble,” in which Mini-Max breaks bad, and “El Fuego,” where the titular armored lucha libre challenges Baymax to a fight. (What can we say? Disney keeps airing new episodes daily, so I’m taking a leaf from my Gargoyles retrospective.)

1. It’s Not the Superstition That’ll Get Ya

“Mini-Maximum Trouble” reveals Wasabi is superstitious, much to his shame as a scientist, so Fred decides to help him overcome his fears by building a bad luck obstacle course, complete with ladder, an opened umbrella, a broken mirror, and a friggin’ black cat. Unfortunately all this running around leads to Mini-Max being hit by a burst pipe, frying his circuits, and making him turn evil. Seriously, he starts trying to kill Fred by engineering a series of accidents, and then kidnaps him, all while wearing a devilishly cool outfit: 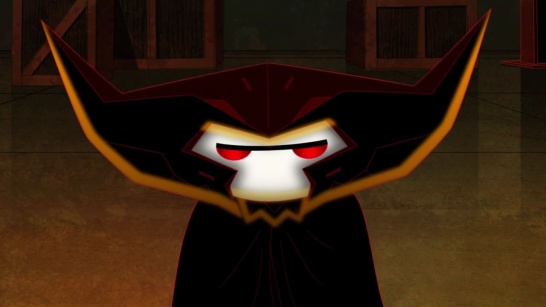 'Professor Chaos? Never heard of him.'

I must admit, I laughed like a loon when I saw the silent movie style montage revealing Mini-Max was behind Fred’s new string of bad luck. Ultimately, this is a fun romp about how there’s no such thing, and that any misfortunate will be the result of actions having consequences: life is ultimately a series of consequences.

I’d have loved to have seen Mini-Max become the big bad for the season’s second half, as close to the plot of the 2002 Scooby-Doo movie as that would’ve been. (If you’ve cleansed all memory of that film, let me remind you, the best part was the reveal Scrappy, who’s much more annoying than Mini-Max, was the villain all along.) Fortunately for our heroes, Fred fixes Mini-Max by dunking some more water on him. Still, he could always malfunction again and return to his evil ways for an episode or two later on.

3. Welcome to the Surveillance State

The episode’s subplot reintroduces Hiro’s new love interest, Megan Cruz, who’s revealed to be a budding new journalist who wants to unmask Big Hero 6’s true identities. Why? To show she can, that’s it, she’s ambitious – unfortunately, that ambition is going to benefit her father, who’s clearly encouraging so he can arrest them. Oh, Hiro is unlucky in love. I suppose it’s an important lesson: who is your work ultimately going to benefit? Those doing good in the world, or those making the rules for everyone but themselves?

“El Fuego” introduces us to the world of mech wrestling, which is a cool elaboration on the previously introduced one of underground bot fighting. As I mentioned last week, Fred is basically the secondary protagonist, so the episode has dual storylines, where his hatred of Richardson Mole – the wrestling league’s new owner and referee – almost gets the better, while Hiro gets upset when El Fuego indirectly trash talking Tadashi when he publically insults Baymax for being a pacifist. Aunt Cass tells the boys to ignore them, explaining letting bullies get under your skin means they basically win, but Hiro’s mind is too clouded by his anger. 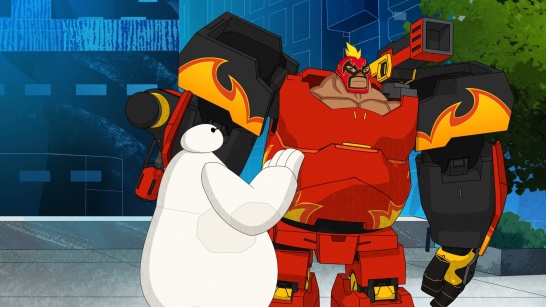 Baymax, seen here demonstrating nothing annoys a bully more than trying to hug them.

He dons Baymax’s armor, and shuts off his friend’s Sky-Maxes so they won’t interfere in his battle to defend his brother’s memory, but he basically winds up losing. Baymax and Fred intervene, using Hiro’s own tech to deactivate El Fuego’s power suit, and allowing the cops to arrest him for causing a public disturbance. It’s amusing to see Fred being the one listening to Aunt Cass, and mentoring his fellow hero for once.

This is an observation for both episodes: the team are still wearing their darker outfits designed to hunt Sycorax’s monsters. I’m cool with that, since the animation team presumably wanted to keep them to better distinguish each season, and because they’d presumably put a lot of R&D into them, including the new weapons that’d have to be recolored to go with their old outfits. Furthermore, it just better sells the passage of time – Lord help me if they ever make another film and go back to the original costumes then.

Bonus thoughts:
– Mini-Max totally does this classic Curly Howard routine (the one Homer Simpson famously mimicked).
– Mini-Max stuffing crayons up Fred’s nose has to be the show’s most brutal joke to date.
– We see Yama’s giant robot again, but now it’s the same colors as the small version as the film.
– It’s hilarious discovering Honey Lemon is such a, how you say, enthusiastic wrestling fan.
– Aunt Cass says she wishes there another local news station after switching off another Bluff Dunder report – oh no, she’s onto you Disney!

OK, see you all next time for a look at the last two episodes of season 2’s latest batch. 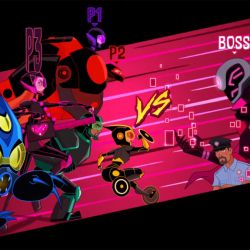 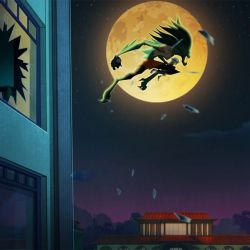 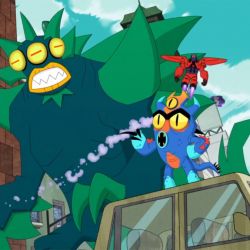