On Big Hero 6 season 2, episode five, Honey Lemon decided she was going to finally cure Globby and restore him to his human form. However, Liv Amara got her hands on some of Globby’s cells to create her own mindless version of him, whose escape leads to a spectacular and slimy showdown.

Karmi takes upon herself in the episode to help Honey Lemon cure Globby. On the one hand, it’s not great that she’s apparently only interacting with the rest of the main cast now that Hiro’s got a new love interest in Megan, but on the other, it’s great to see the episode passing the Bechdel test (aside from Honey Lemon briefly asking Karmi about Hiro). It was also great seeing Liv Amara’s friendship with Professor Granville being integral to the plot too, as she only eavesdrops on Honey Lemon’s plans while going to meet her.

So Amara’s assistant – the one Wasabi clearly has a big crush on – is shown being a willing accomplice, sneaking into Honey Lemon’s lab at night when she’s fallen asleep from exhaustion. Astonishingly, he’s revealed to be superhumanly strong and agile, casually punching his arm through one of Granville’s security robots and silently disposing it, indicating he’s been bio-enhanced by Liv like so many this season (but without the hideous side effects). Poor Wasabi – he’ll just have to go find someone else now. On a lighter note, it’s great to see the gag of Honey talking in her sleep is still being maintained.

After being cured, Globby, or Dibs to use his human name, realizes he misses being stretchy and talks about with his old friend Felony Carl at a cafe. Felony Carl listens patiently, telling him outright it’s a “safe space,” and even offering him a hug. While you could say such sensitive behavior is being played for laughs since Carl is a crook, it’s great such tender masculine actions being normalized on a show lots of boys are watching – I love it, simple as that.

Dibs eventually recreates the accident with Honey Lemon’s tech to make himself Globby to fight the new, mindless evil version. The animators must’ve had a lot of fun storyboarding this fight, with the two bouncing around town and getting as violent as they can – with an unusual amount of punching for this show – as they’re made of slime, not flesh-and-blood. (At one point the show’s creators really indulge their fannish impulses by having Globby become a T. rex, and Nega-Globby turn into Godzilla, complete with the iconic roars, thereby giving us the Jurassic Park crossover we’ve always wanted.) It’s a fun ride made even wilder by the hair metal song, which gives the impression this could just as well be the zaniest Rocky comeback ever made. 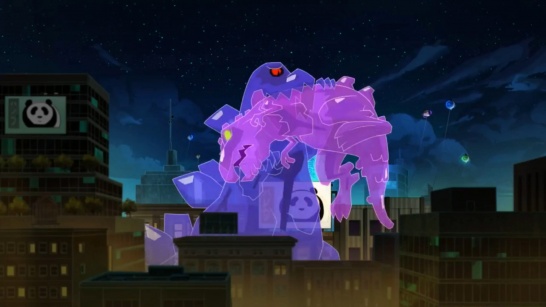 Better than the Godzilla anime

I was worried this episode would go down the cliched route of Dibs reluctantly becoming Globby again to fight his evil counterpart and Honey Lemon being upset about it, so it was a really pleasant surprise to see it was all about Dibs asserting, in his own words, that “being a freak is my happy place.” I really loved that message, that it’s ok to be weird. Sure, Globby might make a mess with his slimy body, but why not make him a suit instead of turning him back into a human? In a way I see this whole episode as a disability metaphor, and how the onus should not be on disabled people to cure themselves, but on non-disabled people to make the world accessible. Being true to yourself to such a common theme in kids’ cartoons, but with Andy Richter’s sweet vocal characterization and Globby’s genuinely unusual appearance, it rang true this time.

Bonus thoughts:
– It’s weird hearing Jenifer Lewis pull double-duty as Sara, the young manager of the Noodle Burger.
– Aunt Cass thinks it’s weird Globby can generate food from his body – probably not Catholic then.
– Hopefully next time we see Sky-Max, Hiro will have learned he should be controlled via his HUD and voice command, not a phone.
Continued below

– At the end of the episode, Globby is giving a piggyback to Weird Little Boy from “Small Hiro One.”
– Almost forgot, Honey Lemon’s got a new gun: 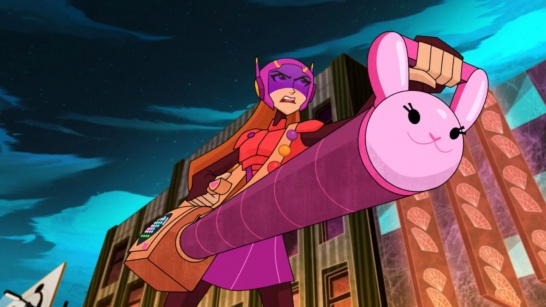 'This has got to make me a gay icon.'

See you next week for our look at “The Fate of the Roommates.”