Well, after seven episodes, The Book of Boba Fett season one is behind us. There were some legitimately great moments, as well as a lot of head-scratchers and, most noticeably, a lot of stretches of nothing. Let’s dig in.

No one really expects Star Wars to pull a terribly shocking ending out of the ether and blow everyone’s mind. Well, we didn’t expect that until two of the Star Wars projects of recent note – The Last Jedi and The Mandalorian season two – had all-time great endings, in terms of defying our expectations (The Last Jedi), or at living up to them in ways that seemed impossible (Mando). But I think that most folks expected Boba to wrap up in a more traditionally appropriate method, and from that perspective, the episode more or less works.

But I’m still having a hard time wrapping my mind around just how inept Boba was throughout all of this, and how no one really questions it. Let’s recap: Boba rides into town and decides that not only is he the daimyo of Mos Espa, but that he will be the mobster with a heart of gold. This is already suspect, but he does no favors to anyone by refusing to meet people half-way, and basically says ‘we’re doing things my way.’ He makes an agreement with the other crime families, offering them basically nothing, and then being shocked when they double cross him.

The only alliances that actually stick are ones that his ‘leadership’ had nothing to do with. Din Djarin owed him for helping with Grogu. Fennec Shand owes him for saving her life. Black Krrsantan is there for the money (and maybe to disembowel some Trandoshians). The Freetown folks are there because of Din. The rancor is a gift from the Hutts. I suppose the Mechs are there out of his good will, so I’ll call that one win for him.

Even with him ‘winning’ at the end of the season, how much of a win is this, really? He didn’t take out the entire Pyke Syndicate, or at least that’s the impression that I get, so they may come back. Sure, they may feel like Tatooine isn’t worth the effort, but that’s not how these things usually go. They’ll just hire more muscle and carpet bomb the city. This seems like a ‘win the battle, undetermined about the war’ situation at best. Shit, if they had one more of those big droids, they might’ve wiped out the whole town in no time.

When The Mandalorian season 2 wrapped up, there were a ton of questions to be answered. The three episodes of Boba that Din was in answered just about all of them. If you happened to skip this series, it would be incredibly jarring to have Episode 16 end with Grogu leaving with Luke, and have Episode 17 start with Din and Grogu back together again.

And while I understand that this show somewhat painted itself into a corner that wouldn’t make sense without Din’s assistance, I fear that bringing him in to save this show may have deflated the hopes for his own show’s continued success. While there are endless Din and Grogu stories to tell, it seems like most of the tension and anticipation for the next season of Mando was more or less dealt with.

That said, if this needed to happen to set the show on an entirely new path, I totally get that. But to bury all of that development into this show is still a decision I’ll never quite understand.

But this episode also undid all the tension of Cad Bane, just a week after introducing him. I understand that Boba needed a definitive win here, but introducing one of the best villains in Star Wars just to have him fall to old man Fett seems pretty weak. He could’ve been a seasons-long nemesis for him if they played this just a little differently.

The Rancor is such a weird part of this episode, as it was presented as essentially an un-killable beast that could take on endless fire. But we know that a well-timed gate can kill it almost instantly. Was that gate really that much more powerful than killer droids and getting a literal shot of fire into the mouth?

I refuse to call these things plot holes, because that’s a term that people use far too freely and without any real context or understanding, but I will say that the show only has itself to blame for putting itself in these situations. There’s no excuse for writing yourself into a corner, and this entire series seems like Jon Favreau writing himself into various corners.

When the Freetown folks showed up talking about Cobb Vanth being ‘hunted down’ by Cad Bane, I was confused. We saw Vanth shot by Bane, but he clearly wasn’t killed. So did Bane go back and finish the job? Nope, it turns out he was just in bad shape from getting shot and needed bacta. Now, this makes total sense if presented just slightly differently. I get that the reveal was supposed to be a pleasant surprise at the end of the episode, but it was shot so poorly that the only character that was totally clear was the Thundercat-portrayed Modifier. I thought it was Vanth, but the camera angle left that shockingly unclear. I could’ve understood it more if we never saw who was in there, but to show us, poorly, is the worst of both worlds.

5. I just had to look, having read the book

I am still a little unsure of exactly what we were supposed to get out of this episode, or this season. Cad Bane taunts Boba that he is a real killer for fighting him, even though Boba has killed literally countless others in the preceding scenes. Why is this fight one that defines him, but him picking off a Pyke from the rooftop treated as nothing at all?

This may seem like a small question given all that we’ve seen this season, but it is so endemic of the issues with this show. There’s just nothing that’s really clear or effectively handled. Some of that can be blamed on Robert Rodriguez maybe not being the best fit for the galaxy far, far away, but more of it needs to be leveled at Favreau, who wrote or co-wrote every episode of this season. This season is so strange; the only real comparison I can come up with is a bonkers one that is much, much better than this. But this season sort of resembles the Beatles’ “A Day in the Life,” where there is a framing song with a second song sort of shoved in the middle of it. However “A Day in the Life” is never boring and doesn’t show its seams the way Boba did.

But here’s the thing: I’m ok with boring! Some of my favorite TV scenes of the past decade are the Mike Ehrmantraut scenes in Better Call Saul, which are usually deliberately drawn and meditative. But those scenes always do something significant, where it is teach us about a character, set up a major plot point, or reveal something important. But this show was boring in ways that didn’t solve anything or move the needle at all. And I’m not even talking about the near silent Tusken Raider scenes, which were among the best of the entire series.

Boba just Forrest Gumping his way through Mos Espa, lucking out and relying on his friends is neither the show that was intended or desired, and the whole thing leaves everyone unsatisfied. I won’t say the show was a total waste, because it clearly isn’t, but if it is to continue, I would think that there needs to be a serious conversation about what it is, and how that can be achieved.

See you in May for Obi-Wan Kenobi! 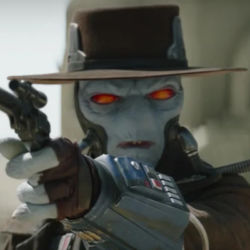 Five Thoughts on The Book of Boba Fett‘s “Chapter 6: From the Desert Comes a Stranger”

While this episode wasn’t quite as removed from the general Boba Fett action as last week’s, it is quite telling that all the characters that were interesting in this episode were introduced in The Mandalorian and that Boba had, I think?, one line of dialogue. 1. How did I forget Cobb? I made a bingo […] 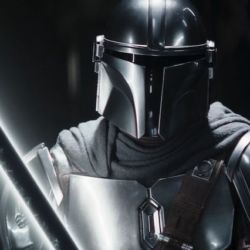 Five Thoughts on The Book of Boba Fett‘s “Chapter 5: Return of the Mandalorian” 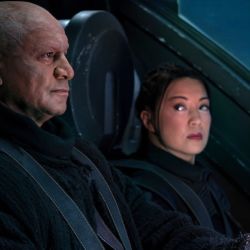 Five Thoughts on The Book of Boba Fett‘s “Chapter 4: The Gathering Storm”

Part of the reason that The Book of Boba Fett has failed to click for me is that there have been these two competing storylines: the flashbacks and the current day. “Chapter 4: The Gathering Storm” closes the book on the flashbacks, but still stalls in giving us anything in terms of new story to […]