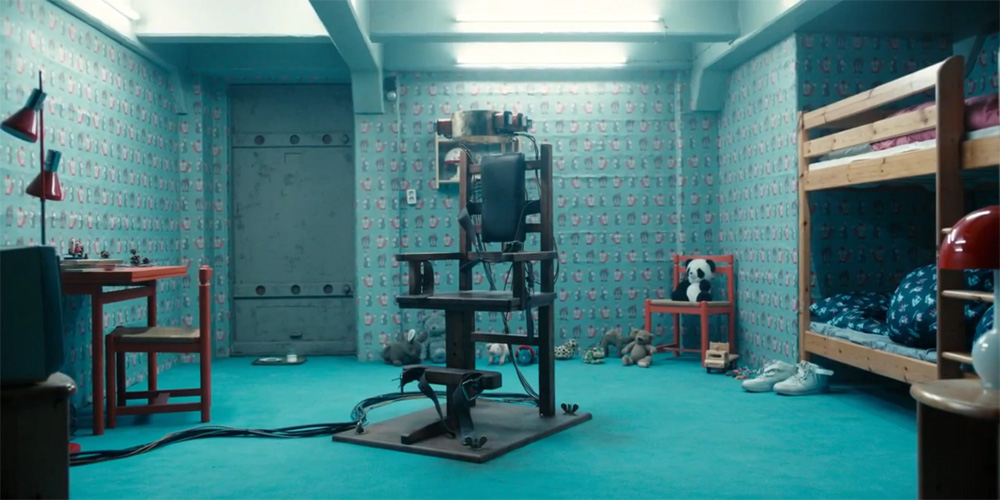 A Netflix series about a sleepy town, a missing child, a conspiracy, and something lurking in the woods — but this isn’t Multiversity’s Summer TV Binge of Stranger Things, but Dark, a haunting German time travel saga that truly lives up to its name. With the imminent release of the third and final season on June 27, we’ll be poring over each episode every week, beginning with the first “cycle,” released December 1, 2017.

I should note before proceeding that these reviews will contain spoilers: I will try to concentrate as much as possible on the episode corresponding to each review, but it’s unavoidable when discussing a time travel series that doesn’t even confirm time travel is involved in its initial episode. (And if you haven’t watched this absorbing show, you must do that instead of reading my ramblings first.) Likewise, all my thoughts are based on watching the show with subtitles, and not the English dub, which I have listened to and don’t actually despise like some, but it should be known regardless.

1. Are You Watching Closely?

Winden, June 21, 2019: artist Michael Kahnwald hangs himself in his studio. Four months later, on November 4, his son Jonas wakes up from a nightmare about witnessing his death. As he tries to make breakfast, the boy fails to overhear his mother Hannah finding comfort in the arms of policeman Ulrich Nielsen. As Jonas rides his bike to school, he observes a poster of the missing Erik Obendorf, and meets up with his therapist Peter Doppler, who double checks he’s absolutely fine returning to class for the first time since the loss of his father.

Ulrich sneaks out and returns to his home, where his wife Katharina and three children Magnus, Martha, and Mikkel are having breakfast. At the school, Jonas reunites with his best friend Bartosz, who he discovers has begun a relationship with Martha — a glance tells us she loved him, before Bartosz took advantage of his absence. Everyone believes Jonas spent the summer in France, not in therapy. Magnus goes smoking outside during the assembly, and his friend Franziska jokingly asks if the principal would be fine with her son doing that.

The first 15-20 minutes of Dark’s opening chapter lays out the vast cast in this piecemeal manner, slowly rotating around members of each of the main families and establishing more and more about them: even before the temporal confusion unfolds, the show is inexorably drawing you in by slowly feeding you more and more morsels about Winden’s denizens. The adults’ occupations are often revealed only well after we’ve met them, and you feel rewarded for your concentration as you build profiles of the characters. 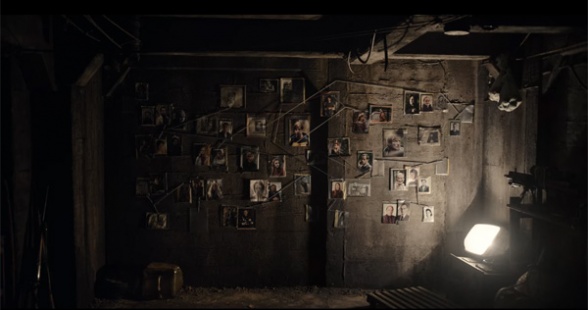 No, those aren't my notes while watching the show

Photographs of everyone, and I mean everyone, further establish the sprawling cast: there’s the opening shots that will, in time, turn out to be photographs of every character as they appear in each time period; two shots of the same (torn) photo show Hannah has become estranged from her mother-in-law, Ines, after Michael’s death; and we learn from another that Peter is married to the town’s police chief Charlotte, and that they are the parents of Franziska, and her younger sister Elisabeth.

The exposition is also smartly sprinkled in other ways, like a radio report that establishes the history of the town’s nuclear power plant, and its planned closure within a year; and a sign Ulrich jogs past telling us how near the town’s caves are, as well as the subsequent sight of a hooded figure emerging from them. Another object, Michael’s will, is established early as being withheld by his mother Ines, as it’s sealed with instructions to not be opened until the night of November 4, 2019 — it’s a mystery that provides this episode with its own ticking time bomb, and Ines’s disturbed reaction to its contents sets up a revelation for another chapter.

Before the episode closes, it introduces two more objects of interest, a Walkman player and a Raider packet, neither of which are from today — the show is well and truly asking to observe and take in everything as if we are also detectives descending into the rabbit hole.

Aptly, the show has some dry humor that requires repeat viewings to truly appreciate. Ulrich is called by his mother Jana on the police number — perhaps this town is so depressing that contact with family is considered a solution to an emergency, but it turns out she has a clue regarding Erik’s disappearance, having seen the shadowy figure, and discovered the Raider packet.

We later see Jana, and Peter’s father Helge, muse on Erik’s disappearance echoing that of Ulrich’s brother Mads during the ‘80s. Suddenly, we cut to Erik in a room that resembles a cross between a child’s bedroom (complete with bunk bed), and a torture chamber, while “You Spin Me Round (Like a Record)” by Dead or Alive plays on the TV — now not only is that a play on history being repeated like a record, it truly is torture.

There’s something appealing about Nordic (or in this case Deutch) Noir: despite the grisly subject matter of these stories, their cool, wet North European settings make them feel oddly inviting as well (you can almost smell the morning dew). Hotel Winden captures this dichotomy well: its lobby is large and sumptuous but oppressive, further rendering its owner, Regina Tiedemann (Bartosz’s mother), seem isolated and lonely. 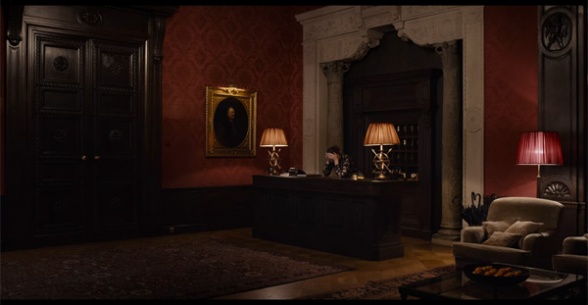 It looks cozy, but not when Regina's upset

This is a town on the edge of civilization, almost swallowed by the forest and the cycle of life and death that it embodies, fracturing the sense of community — if there’s a town center, we never see it, and the decision to hold the town meeting about Erik’s disappearance in the school hall enhances the sense of how separated everyone and everything is.

At the climax of the episode, Jonas, Bartosz, Martha, Magnus, and Mikkel all go to the caves to search for Erik’s drug stash (though Franziska has beaten them to the punch). They hear a noise, and as their flashlights flicker, they flee, and Mikkel is forgotten during the confusion. What you may not recall until rewatching is that at the start of the day, Mikkel performs a vanishing magic trick for his father at the breakfast table, quipping, “Dad, the question isn’t how, the question is when.”

Now he’s become a disappearing act himself. Likewise, there are so many casual references to scientific theories about simulations (with Martha and Jonas joking about “a glitch in The Matrix”), and black holes, that it’s rather funny in retrospect; and at the end, what prayer does Peter recite? The incredibly fatalistic sounding Serenity Prayer (written by German-American theologian Reinhold Niebuhr):

God, give me grace to accept with serenity the things that cannot be changed,
Courage to change the things which should be changed,
and the Wisdom to distinguish the one from the other.

Fatalism is a theme we’ll return to often later.

There are a few misdirects as well. Early on, while walking to school with Peter, Jonas mentions he “still sees” his father. During the confusion outside the caves, he has a vision of his father again, covered in blood, frightening him off from looking for Mikkel. Since the show has not actually established time travel is taking place, we’re left to wonder if something more sinister and supernatural is lurking.

The next day, the search for Mikkel turns up the body of a boy in the forest, but it’s not him. The corpse has burned out eyes, as well as the Walkman — but why? Who was he? And where’d he come from?

So what of poor Erik, the first boy to go missing? We see the red haired boy being bound and gagged into a chair, as a metal band closes around his eyes, and with it the first episode — he’s no longer important.

– Much of Dark has the same thematic and stylistic preoccupations as Baran bo Odar’s first film, 2010’s The Silence (itself based on a novel by Jan Costin Wagner). These range from missing children, history repeating itself, and the lie of the bucolic countryside; to hypnotic shots of the forests, and police combing the fields for bodies. (Karoline Eichhorn, who plays Charlotte Doppler, also has a role as a bereaved mother in the film.)

– Hannah really doesn’t give a damn about anything but her own satisfaction, walking out on the meeting over Erik’s disappearance because Ulrich is late.

– Peter has something to tell Charlotte when the second boy’s body is found, but struggles to, implying emotional difficulties as well as ones in their marriage.

See you all next week for our analysis of part two, “Lies (Lugen).” 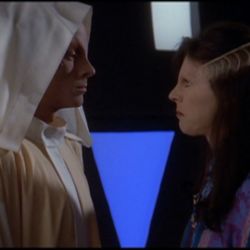 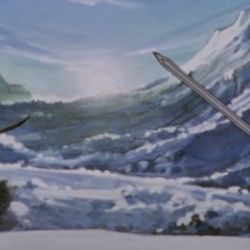 Five Thoughts on Berserk’s “The Spark” and “Confession”

It’s here, Multiversity Readers! This week we finally set to see Griffith and Guts go head to head in “The Spark” and “Confession.” We are drawing close to the end of the series and so many pieces are finally falling into place so let’s start with the big one.1. The Hilltop RevisitedIt’s simply magnificent how […] 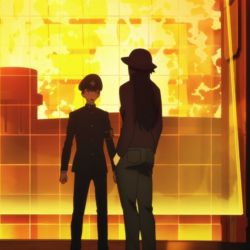 This time around on Fire Force, we see some new plot aspects emerge with a new story arc while some more dust themselves off and reappear for their time in the spotlight. There’s some more great Eighth company antics, some worldbuilding, and even a hint as to where Shinra’s brother might be! Let’s take a […]