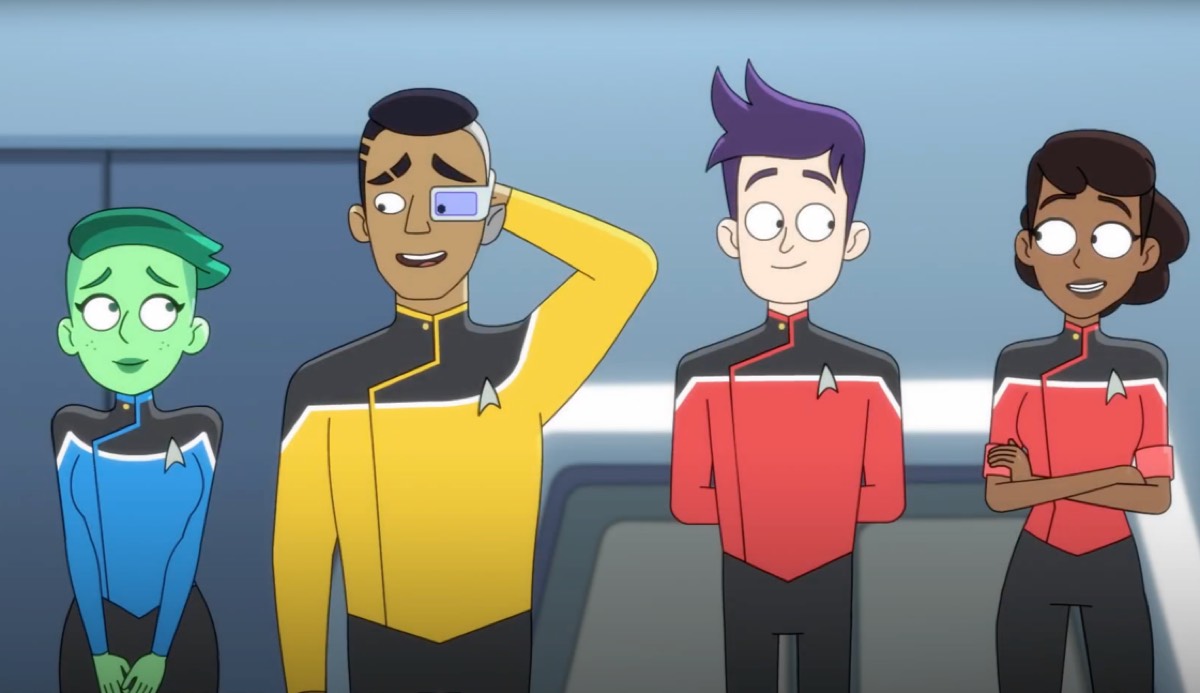 When we first see the U.S.S. Cerritos on screen, it’s basically an inverted version of the U.S.S Enterprise, which is the best way to describe the action of this new Star Trek series; inverted from what we’ve come to expect from Trek.

Here we are in the year, 2380, not long after The Next Generation, and our characters’ uniforms suggest just that. We meet Ensign Brad Boimler, a true Starfleet man, or so he believes himself to be, recording a fake Captain’s log, revealing his true dream, to make it to that chair on the bridge. Not one to let an opportunity to tease pass her by, Ensign Beckett Mariner burns him real hard for recording that log, while drunk on blue Romulan whiskey, and then accidentally stabs him in the leg with a bat’leth. Wait. Hold up. These are Trek items, but totally not Trek behaviors. I guess the Lower Decks are where the fun shenanigans happen. Imagine Riker accidentally stabbing Geordi in the leg with a bat’leth. I think not. But we still have to get to Boimler and Mariner’s jobs on the Cerritos, and this is Ensign D’Vana Tendi’s function when she boards the ship. She’s here to assist the nurse, and boy is she filled with a sense of wonder to be aboard a Starship. She meets Boimler and Mariner as they’re fixing a replicator that’s spitting out only warm bananas. Pretty sure that would be a bummer if you ordered an earl grey tea, hot. The last of our “cool, scrappy underdogs” is Ensign Sam Rutherford, engineer, with his new, still malfunctioning, Vulcan cyborg implant.

There are few events as sacred in Trek lore as is First Contact. But the reality of the situation is that someone’s got to do the goddamn paperwork. And that someone is the Cerritos. The crew is sent down to the planet to help its people and do that dirty work after those that made first contact left. Boimler has been given a special assignment by his captain, Carol Freeman, keep an eye on Mariner and report back to her with any findings. While down on the planet, Boimler sees Mariner sneak off with some contraband and follows, assuming she’s selling arms to inhabitants on the plant; turns out, it’s simply farm equipment these folks need to survive. We begin to see a distinct rift between the lower decks characters and the upper decks characters here. Mariner accuses Boimler of being inexperienced; she’s been on various ships and has seen how things operate in Starfleet, in the outside world, and she’s jaded because of it. He’s bright eyed and bushy tailed because he hasn’t seen enough to dissuade him from believing the company line, from worshipping those on the upper decks. Oh, also, through some tomfoolery, Mariner is suckled by a giant alien spider, but this manages to save the day for the poor farmers on the planet. On the other side of things, the Cerritos’ First Officer, Jack Ransom, a much more obnoxious Will Riker, inadvertently brings a zombie-like virus onboard the ship that begins to spread amongst the crew and risks infecting all of them…almost leading to their demise.

3. Dating in the world of Trek

Kirk had his flings, Picard was notoriously more selective, and Janeway frequently spoke of how impossible it was for her to date anyone from her ship. So how do relationships work for the little people on a ship? Do they have more freedom to date whomever they please since they don’t necessarily outrank anyone and the power dynamic isn’t as weird? We catch a glimpse of the dating world, albeit an odd glimpse, through Rutherford’s date, as it extends the duration of the zombie outbreak. Hey, if you’re on a spaceship, I assume these interruptions happen all the time; you gotta maximize your dating time, even if that means a space walk on the hull of your ship and shooting zombified crew members.

So, as it turns out, all of the characters we’re following here, are the red shirts. As Mariner tells Boimler about all those upper deck crew members, “All they care about is glory. They don’t care about us. They want to be mentioned in history books.” It’s like they’re the cool kids, they kinda seem like dicks, they’re self-involved and, they couldn’t even pronounce the name of the species they made second contact with; this series gives us a whole different perspective. Trek poking fun at Trek, which is not something I ever really expected Trek to do. Like when Boimler was suckled by the giant spider, wasn’t feeling great, and Mariner told him, “You’ll be fine. Doc will wiggle a light over it.” I didn’t even catch this on my first viewing of the episode. I caught it on my second. And I died. That’s literally ALL doctors do in Star Trek, but what about the psychological scars, doc?! What about those. Anyway, Boimler is covered with a gross, purple goo from the giant spider when he returns to the Cerritos and Dr. T’Ana yells, “he’s worthless, it’s the slime, the slime could save us all!” (Which does remind me of The Simpsons “Lord of the Flies” episode, but that’s a review for another day.) And it does, with the Doctor receiving all the credit in the Captain’s log. Luckily Boimler is there to hear her give that credit to her entire senior staff, just like in every, single Trek series. Looks like Boimler has gained some of that experience Mariner spoke to him about, and he doesn’t turn her in to the Captain, oh, who turns out to be her mother.

I hate this question. I thoroughly enjoyed this episode, and it’s not your dad’s Star Trek, and it doesn’t have to be. It’s a fast paced comedy that keeps plenty of Trek elements and surprises for fans and non-fans to enjoy. The episode ends with Mariner taking Boimler under her wing; she’s going to teach him about Spock, how he came back from the dead, the Genesis device, dealt with some space whales, and then about Kirk, Worf, Sulu, and Troi, how she went from a jumpsuit…