Such is life being a Doctor Who fan, that we are constantly changing location each episode, last week we were fighting mud zombies in the 17th Century. This week however we are heading to Norway, to a mysterious cottage with a strange mirror. As ever, spoilers ahead.

I thought Jodie’s Doctor was great in this episode, she really shined. There were a few moments that stood out for me, the first, was at the beginning, where she started to eat the soil, finding out where they were, Norway. This was a very Doctory moment, she even asks the others if they wanted to try some, which they all declined, of course.

Also, I like how the guest writers are writing her, I think personally, the guest writers know more about what the Thirteenth Doctor is like than the executive writer. She is more daring, more adventurous and more impulsive, which is like her predecessors but she gives it her own flare.

This comes across when she is confronted by the evil and how she takes the reins. I think with great writing, the Thirteenth Doctor is amazing. 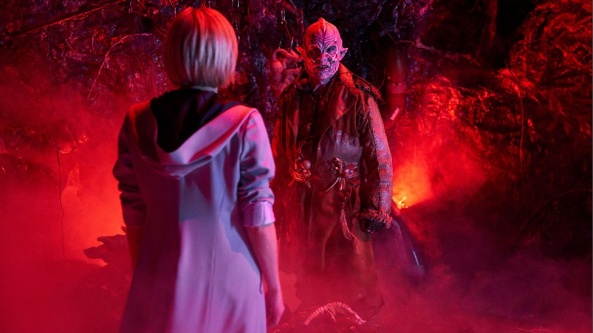 2. Killer moths and the Red Goblin.

After we meet the girl in the cottage, Hanna (Eleanor Wallwork), who is blind and waiting for her father to return, so naturally the Doctor and her friends decide to help. On discovering the girl is hiding from a monster in the woods, the team take points in the house to watch out for the said monster, Graham finds a mirror that offers no reflection, which upon investigation, the group finds out leads to another dimension, an ‘Anti-Zone,’ a zone that is created when space and time are split apart.

The ‘Anti-Zone’ is a dimension that is dark and dangerous, the Doctor, Yaz and Graham stumble across an ‘Anti-Zone’ creature, going by the name of Ribbons (Kevin Eldon), who looks like a cross between a goblin and golem but the skin is red. We find out that there are killer moths, now these aren’t your run of the mill little moths, these are the size of a small cat and strip the skin off of bones in seconds.

I think the ‘Anti-Zone’ is a great concept, places that seem to stop universes from smashing together. I do however think that there wasn’t any need for Robbins, I think that the killer moths would of been enough.

Once the Doctor and the group reach the other side of the ‘Anti-Zone’, we enter into the same cottage, yet not. There are no boards covering the windows and it seems like summer on this side of the zone, however something is wrong, when the group happen upon Hanna’s father, Erick (Christian Rubeck), happily cooking away, the gang are stunned, only to find Hanna’s dead mother, Trine (Lisa Stokke),  walks through the door, to the surprise of everyone.

The Doctor slowly works out that this is a dimension made up by an ancient being called the Solitract, that has lived through our universe’s creation. This being isn’t compatible with our universe, however it is trying to entice people over to its dimension because it wants to interact with us. As we slowly find this out, Graham is confronted with something that he wouldn’t expect in a million years, his wife Grace, who died in episode one.

There is some heart string tugging scenes to be had here, Bradley Walsh’s performance as Graham has been a highlight throughout this season, and this episode is yet another Graham corker. There is a moment where the group finds Hanna hiding in a cupboard, and Graham asks if she is hungry, to which he states he always carries a cheese and pickle sandwich with him in case of emergencies. He really shows his emotions and the sadness in his eyes are heart breaking, and of course as we find this out, we also find out that this is all a trap, so we now have the Doctor trying to convince Graham that his love, his everything isn’t real, and for a mintue, he does want to stay, but they can’t, otherwise our universe and this new one will be destroyed. After some tense scenes the group is back in our universe, leaving the Doctor to face the danger, alone.

4. The Doctor and Kermit.

Wow, that’s about all I can say, this episode was great until the reveal of what the Solitract really looks like, they could of had anyone, they could of had: River Song, the Doctor’s wife, Captain Jack, Susan, Rose, anyone who has had some relevance to the Doctor’s life however the writer of this episode thought that having a frog would be the last reveal. Graces favorite animal was frogs, plus it uses graces voice.

I thought this was very baffling and didn’t see it coming which gives me real mixed feelings about the ending, having a frog puppet, which wasn’t even CGI was strange, Jodie’s acting through these scenes was great, but the gravitas was taken away by the fact she was talking to a puppet of a frog.

After their encounter the Doctor convinces the Solitract to let her go, which it does, she then seals her  farewell with a blown kiss.

Now throughout this whole season we have had Graham and Ryan’s back story, where Graham is Ryan’s step grandad, and their relationship has been rocky, not knowing where they might end up, however this episode brought a real tear jerker, with Ryan finally calling Graham his grandad, to his surprise. This was a very important moment, as we have seen Ryan being very defensive in regards to relationship, I think that is because his father walked out on him when he was younger plus losing his nan, he doesn’t feel like he belongs, but now I think he is finally letting his guard down, I hope that Graham is around long enough for their relationship to grow.

In conclusion, I think this was a strong episode, Jodie’s Doctor is becoming her own and I love how these guest writers have taken her Doctor in her own direction, plus I feel she is understanding her Doctor more and more, which is great to see. The acting in this episode was on top form, from Eleanor Wallwork, who is a blind actress to Bradley’s Graham to Jodie’s Doctor, they all showed excellent acting ability in the episode. The only thing for me that let this episode down was the ending with the puppet frog.

Next week we have the last episode of this new season and the conclusion of the Thirteenth Doctor’s first outing, in “The Battle of Ranskoor Av Kolos.”

It all comes down to this, that statement that started this season off with a bang: “everything you ever knew was a lie.” Now, at the hands of her sworn enemy, the Doctor (and us) find out just how much of 50+ years and 12 regenerations really was truth.  Also there’s those pesky Cybermen to […]

Five Thoughts on Doctor Who’s “Ascension of the Cybermen”

Well, my Whovian friends. We’ve made it.  The sophomore season of the Chibnall-Whittaker era of Doctor Who was no stranger to risks while embracing the series’s long history. But that ambition proved a double edged sword, as it seemed time and again a show in search of a way to sustain momentum and bring all that […]

After a season of high concept stories tying directly into social and cultural issues, it’s time for a break with some good ol’ fashioned historical drama Whovian style as the fam heads to Regency Europe to meet with some of literature’s greatest minds.  But this isn’t this season’s take on, say, “The Unicorn and the […]