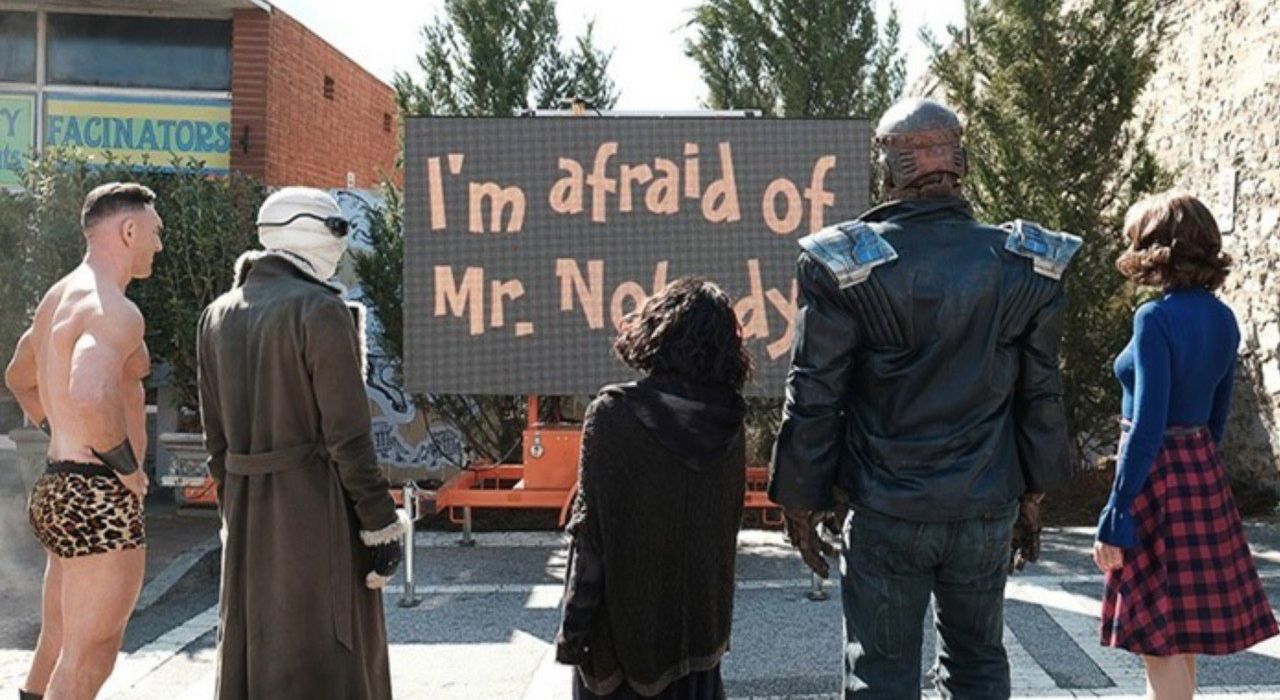 Doom Patrol climaxes–in more ways than one–this week as it winds towards the end of its first season. After the rocky start this series had I expected at some point it would dip in quality. Surely, it would have at least one more bad episode. If it’s going to, it will be the Game of Thrones of DC’s streaming service because there is, at this point, only one last chance to miss the landing. “Penultimate Patrol” delivers one of the best installments to date. Here are five thoughts on the second-to-last episode of Doom Patrol and, as always, you should beware of spoilers .

Let’s move like a Chuck Palahniuk novel and begin by shooting our wad. “Penultimate Patrol” features Flex Mentallo inducing in orgasm in our titular team, the denizens of Danny the Street, and Danny themself. This marks the second time that Doom Patrol has brought me to tears (and both involved Danny) but for a starkly different reason than the last. I hysterically laughed aloud to the point that I freaked my cat out in this moment of the show. The entire cast deftly handles faking orgasms in a scene that is so well edited–and to the tune of “All by Myself”–that the critical portion of my grey matter squirted all over my cerebral cortex.

Doom Patrol has leaned into edgy territory from the get and yet managed to avoid feeling puerile or hackneyed. The moments that are shocking are always done with reason and intent, and played to full effect. “Penultimate Patrol” is the pinnacle of this tonal treatment.

My chest was also tightened by the conversation between Vic and Silas. This has been an ongoing thread as Vic’s distrust of Silas is brought to the forefront in “Penultimate Patrol.” There’s so much to parse out in the relationship between father and son here and I hope to see more hashed out in a second season but we’re given confirmation that, while Vic was manipulated by Nobody, there was good reason to question his father. Tears for fears were justified as it turns out Vic has been manipulated by Silas, though not in the way we thought.

3. I’m Sick of Having Someone Else Tell My Story. Badly, I Might Add.

There’s a great deal revealed in “Penultimate Patrol,” though most of it had already become known by the audience at this point. These revelations are more for the cast, and give an emotional payoff to the buildup over these last fourteen episodes. These are personal revelations. This is Cliff realizing he is and always was a real shit. It’s Rita coming to terms with her diva lifestyle and how it hurt so many others. It’s Larry understanding that he can never be the man his family deserves. And it is Jane struggling with her own personalities against a desire to protect “regular people” or “the girl.”

These characters have been fleshed out across these episodes to a point that they feel real and grounded within their outlandish and unbelievable setting. .

Those personal revelations lead to redemption, for all involved. As Larry laments “I ruined this family years before today,” Mr. Nobody’s trap winds up only strengthening the resolved of the team. Larry, Rita, and Cliff quickly come to terms with who and what they are at their core and how they have grown since coming under the wing of the Chief. They were monsters before becoming disfigured and only embraced compassionate humanity after.

This is juxtaposed with Vic’s realization that he was never needing the redemption he has sought. While the rest of the team has sought to be absolved of their sins, Vic’s mislead belief that he was the author of his own misfortune led him to be the hero he has become.

All of this is folded into the wonderful fake-out in the final act of the episode. After believing Mr. Nobody beaten by psychology Niles and the Doom Patrol are put into a loop of destruction at the hands of Nobody himself. One of the most fan-pleasing aspects of this is the character design which is a lovely throwback to the original costume designs from the comics. That red and white color scheme is such a joy to look at. And even though the scene is contextually false, it looks perfect.

One other comment to note is that of Hammerhead, which is repeated here but first used in the White Space. “Fuck the regular people” is possibly the best capping off to this series. Doom Patrol is the antithesis of most superhero stories. These characters are anti-social misfits who honestly represent the fandom of comics and superheroes far better than a Superman or a Wonder Woman. Many in nerd culture are broken and seek escapism through these characters, and who better to represent us than the eternal fuck-ups that are two robot boys, a sponge lady, the girl of a thousand personalities, and the electric bandage man?

This was quite possibly the most difficult review to write of this series, and next week’s resolution looks to surpass that. Doom Patrol is a series I have praised since the third episode, but it is so well deserved. It’s hard to imagine DC’s TV division doing any better than this. This show, not just Flex Mentallo, gives me a braingasm. 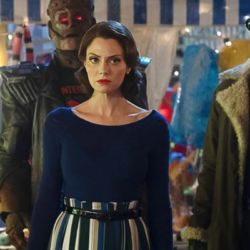 It’s something of a bittersweet week to review Doom Patrol as we end its second season with an uncertain future. The show likely is the only widely-agreed-upon good thing to come out of the DC Universe streaming (and more) app has neither been canceled or renewed. The double-dipping here would also seem to not bode […] 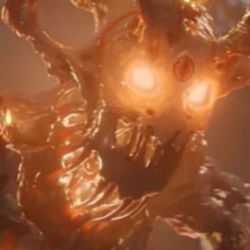 We’re nearing the end of Doom Patrol–hopefully only for now–but “Dad Patrol” continues the slow pace of this season that sees events ramp up towards the end of most of these nine episodes. Last week was a bit of a reprieve from that trudge but once again we have an installment densely packed with plot […] 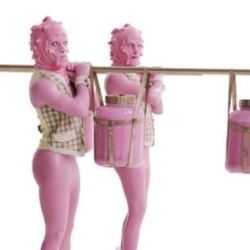 This week Doom Patrol has more junk packed in the trunk than a skate punk with mixtapes of funk trying to make a dunk in the hoop like a drunk with gunk in his hair like he thinks he’s a hunk. That is to say, there’s a lot going on in “Dumb Patrol” and we’re […]