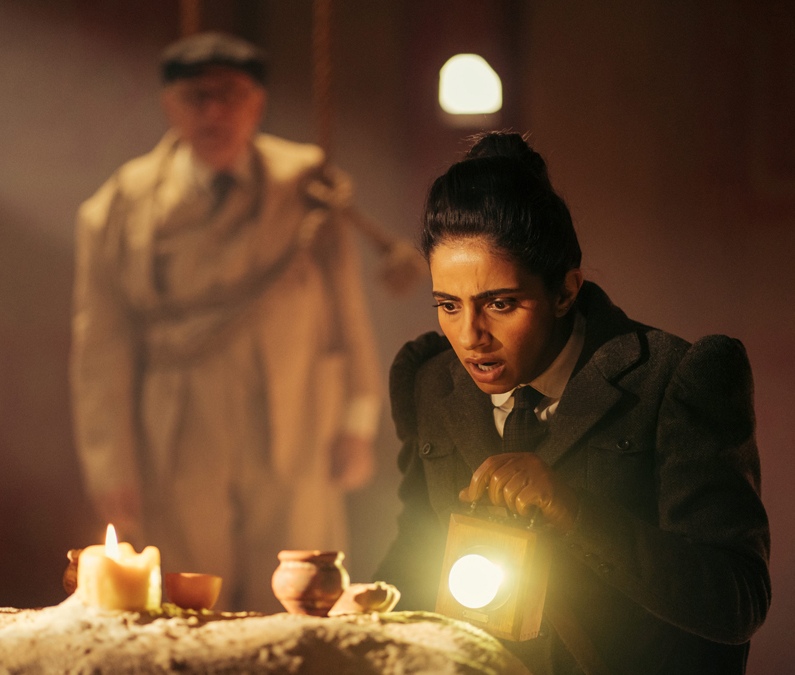 For a series titled Doctor Who: Flux, things really start to come together in this penultimate episode of the season, as the various plotlines start to make some sense.  Which is all well and good, but that leaves one episode to tidy this whole thing up, and that’s a tall order to be done in 60 minutes (or 75 if you’re stateside like me and have to manage commercials).  Let’s make some sense of “Survivors of the Flux.”

Things may be in a lot of flux but one thing is always constant: Beware of  Spoilers!

1. From One Sticky Situation to Another

We all had a feeling the Doctor wasn’t going to last as a Weeping Angel. Taking their body was a means to an end, a transport to the headquarters of The Division, the agency in hot pursuit of the Doctor all season.  Taking her to their leader, that leader reveals to be someone very familiar from the Doctor’s past: Tecteun.

Remember her? We met Tecteun in the previous series finale, “The Timeless Children” as the woman who found the Doctor (aka the Timeless Child) and the properties of regeneration.  This was the revelation that the Doctor has unlimited lives, and that everything she has known about Gallifrey has been a lie.

Needless to say, this isn’t a happy family reunion. And it’s made less so by Tecteun’s revelation that The Division is behind the Flux, and they’re getting ready to cash in on their greatest prize: Earth.  It’s enough to distract the Doctor from a Gallifreyan watch fob in the care of the Division that holds her memories. (There’s that creepy house in the Doctor’s memories again!)But not enough when the Swarm show up and obliterate Tecteun, but ready to carry out the Flux’s grand plans.

This is a nice callback to last season as an attempt to answer some of those very big questions that finale posed, but introducing her so late in the game (as my better half complained more than once during this series, “we’re introducing MORE people?!”) takes away any time for deep and thorough exploration of these developments.  The fact that this is Jodie and Chibnall’s final series just adds salt to this wound.  It’s yet another one of the Chibnall Greatest Hits Parade, and I’m losing patience with it.

2. Sisters Are Doing It For Themselves

Back on Earth, Yaz, Dan, and Jericho (the scientist from last week) are hopping through history (on the orders of the Doctor, no less) looking for the date and time of the end of the world. Yaz is clearly in charge, and we have those moments of growth we were all hoping for with her character with her as a solo companion.

In fact, all of the women of this episode hold their own quite well.  Bel finds her way to Earth and holds her own against Karvinista (who’s in a Mood because Dan has attempted to reach out to him from the past, and he can’t time travel.) The Doctor’s holding the line with the Weeping Angels and the Division.  And Yaz has the lead on their plan from the Doctor, managing to keep everyone out of trouble (and from getting killed).   In spite of what a certain member of the British Parliament said, these are perfect role models for boys and girls.

If only they had a strong narrative to back them up.  Bel’s meetup with Karvinista brings them closer to the inevitable action that will come on Earth.  But the Yax/Dan/Jericho plot makes little sense because there is no “why” attached to it, and once it’s revealed that Karvinista’s ship cannot go back in time, the momentum dies. And let’s be clear: when the Doctor and the fam aren’t together, things just don’t work as well.

Though those three do get to meet up with Joseph Williamson and his Liverpool tunnels (that are actually time tunnels) so maybe they will get home after all.

3. Getting Meta With It

First it was the premiere episode taking place on (and airing on) Halloween.  Then there was last week’s episode, where the great disappearance of Medderton took place on November 21st 1967 – – which is 54 years before the episode aired.  This week, it’s Yaz’s discovery of a pot with the date of December 5th on it — which is the date of next week’s season finale.

Things are getting real meta in here.

Yes, I know I promised I wouldn’t talk about sound mixing anymore after last week.  But you’ll also recall I may or may not have had my fingers crossed behind my back for that. *wink*

The good news about the sound mixing this week is that it is markedly improved from the previous two weeks.  That could have been due to the nature of this episode, which was less on the climatic action moments and more on character moments.  But even in those high-stakes scenes, the background score stayed where it should have been: in the background.  I’m hoping this is the result of hearing fan complaints and doing just a little bit extra post-production.

5. Snake in the Grass

The other major B plot of this story, which initially appears to make no sense, brings back the Grand Serpent (who you’ll recall from “Chapter Three: Once, Upon Time”) in a decades-long infiltration of U.N.I.T. Through the years, he manages to grasp more and more power, killing off those who oppose his plans.  Except for Kate Stewart, who stands up to him and survives. (Once again, women! Saving the world!) It starts off as another one of those cameos for the sake of having one, right down to the voice of the late Nicholas Courtney.  And just when you’re rolling your eyes at the latest Chibnall Greatest Hits Parade . . . this one makes sense.

The Grand Serpent’s deactivated U.N.I.T.’s defenses.  The Lupari guarding earth are vulnerable.  And the Sontarans are set to invade Earth, both from air and through Williamson’s time tunnels. It looks like the end of the world is upon us. Oh boy.

We’ll see you next week for “Chapter Six: The Vanquishers” and let us know what you thought of the episode in the comments! 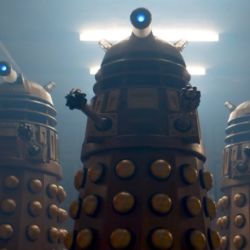 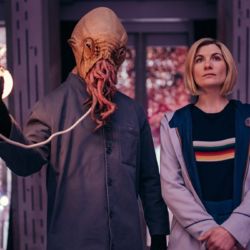 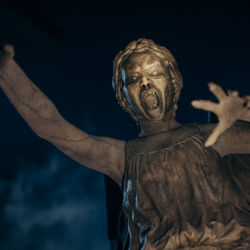 Five Six Thoughts on Doctor Who: Flux‘s “Chapter Four: Village of the Angels”

The most iconic of the villains of the modern Doctor Who era take center stage this week, as the fam heads back to the Swinging Sixties and a village full of Weeping Angels.  Who ends up with the upper hand when it’s all over? Fire up the TARDIS for a road trip to the “Village […]