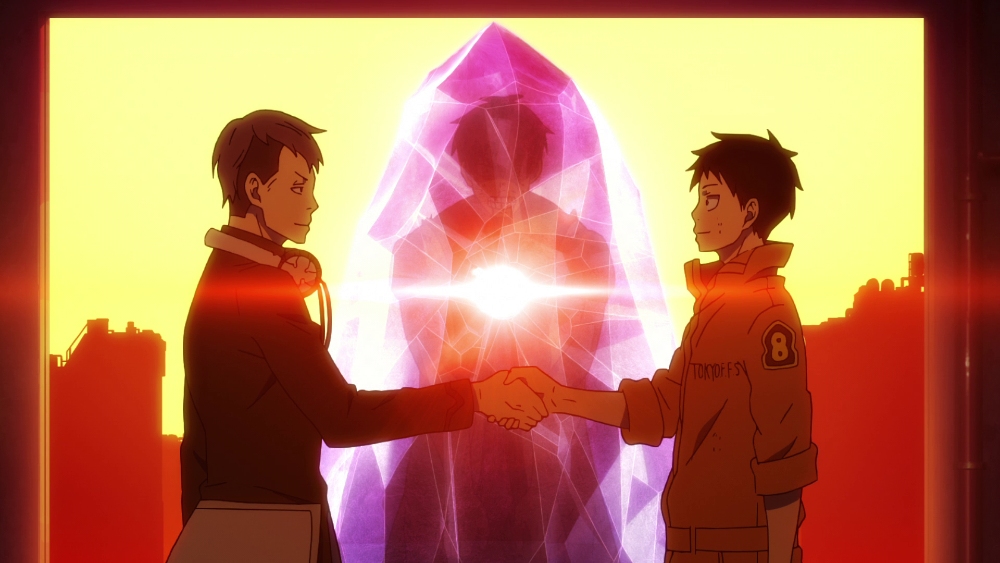 The biggest climactic fight of the season is here! We’ve had some serious battles in the past with Fire Force but none have felt so well built up or as offensively personal to Shinra as this one with Lieutenant Rekka. There are some slick action sequences and great inter-fight banter on display here, so let’s not hesitate and dive into this week’s recap!

1. Tamaki but serious now
In the cold open this week, we get a little bit about Tamaki’s connection to Rekka. The character is painted really well as a passionate person who could slip into obsessive villainy without a second thought. He’s given such an overbearingly positive attitude that channels a lot of real-life religious fanatics in a way that creates a creepy parallel to our own reality to really sell Rekka as a villain. And yet, with the way that Tamaki narrates her flashbacks with him, it’s easy to see how easily people can fall into worshipping and following these kinds of ideals.

The rest of the open is a little bit of a retread of the ending of the last episode, but the extended crying animation hits just as hard with the added context of Tamaki’s connection to Rekka. It’s not only a cathartic moment, but it’s also one of the most highly detailed short sequences in the anime as a whole, which makes it feel even more significant.

2. The purest flame
This wouldn’t be a Shonen anime without our protagonist having some sort of unique ability that separates him from the crowd. It may be a tired trope, but it’s hinted at here with enough intrigue and mystery that it works more as a plot point for the audience to speculate over. Rekka realizes that his Infernal Insect is freaking the fuck out over Shinra’s flames, and realizes that Shinra must have an unsullied flame, the ‘Adollo Burst’. It seems to be the thing that he was looking for when experimenting with so many kids before, so it adds an extra layer of desperation to the fight between them instead of Shinra just impeding Rekka’s progress. This works both ways, however, as having Rekka reveal to Shinra that he turned so many innocent children into Infernals naturally triggers Shinra’s hero complex.

I should also mention that we see Tamaki’s cringeworthy Lucky Lecher ability on display here, but it’s actually handled surprisingly well. All the characters are super tactful and consenting about everything, and it’s used more as a way to break up the overbearing serious mood rather than to just work as icky fanservice.

3. Power vs. Mobility
This is where we get to some of that good good animation, folks. One thing I love about Fire Force, and have mentioned in the past, is that it still has some serious martial artistry and weight behind all the supernaturally-powered fight scenes. Having Shinra specialize in channeling fire through his feet gives a great sense of momentum to the fights as his feet act almost like a pendulum, giving real oomph and weight to each hit. Each time Shinra jets up to the sky and then slams his fire-powered hoofers into an opponent, it feels momentous and core-shaking. In opposition, Rekka is animated as a great opposition, fighting primarily as a boxer. Each swing might not have as much weight as one of Shinra’s jet-propelled kicks, but they always have a great sense of released tension each time he fires one.

There’s some fun strategizing in the fight too. Instead of just relying on who’s power level is bigger, Shinra realizes that due to his power coming from his feet, he has greater mobility which should give him the upper hand regardless of Rekka’s strength. It makes fight scenes, especially longer ones like this, a lot more fun to watch and engage with.

4. Cults are bad, kids
Once most of this fighting is out of the way, the show starts to get down to the nitty-gritty of why the fight is taking place anyway. Rekka starts to reveal more and more about the enigmatic figure revealed in the last episode, the Evangelist, and how they wish to create Infernals. Shinra questions what the heck the endgame is with this, and it’s here we see Rekka at his most cult leader-esque. The animation depicts him with a sickening rictus grin as he’s primarily engulfed in his own flames, giving us even more unsettling imagery. To top it all of, he explains to Shinra that the goal is to engulf the planet in flames, cleansing it of humanity and creating a second sun. A nice, achievable goal any sensible person would want to work towards.

Tamaki, meanwhile, has taken it upon herself to think of the children (Won’t someone!?) and get them out of harm’s way. While this might seem like a small detail, it gives her agency and takes her out of the princess role and back into the firefighter/protector-of-the-people role, which is super important.

5. Karim chills out
Before Rekka can really go nuts, we see Karim, our favorite Tuba boy, arrive on the scene and freeze him the heck into a crystal. It’s a cool moment (I’m sorry, I honestly didn’t mean the pun) but it has emotional weight as Karim reflects on once thinking that Rekka was a good man and the years he’s spent working with him as an equal. Before the gang can get too settled, however, a sniper from afar takes out the crystallized Rekka! We flip over to the culprits and see an exceptionally cool use of flames in the form of a sniper/bow-and-arrow formation being used by a veiled figure. Shinra, Karim, Tamaki, and the others scramble together quite well to create a smokescreen and ward the snipers away, preventing them from taking anyone else out.

It’s a great moment to see the characters working well together with chemistry that feels so natural and earned. Plus, we get a nice moment between Shinra and Karim as the latter proposes to work together on finding out who the Evangelist is and stopping them. Go, team!