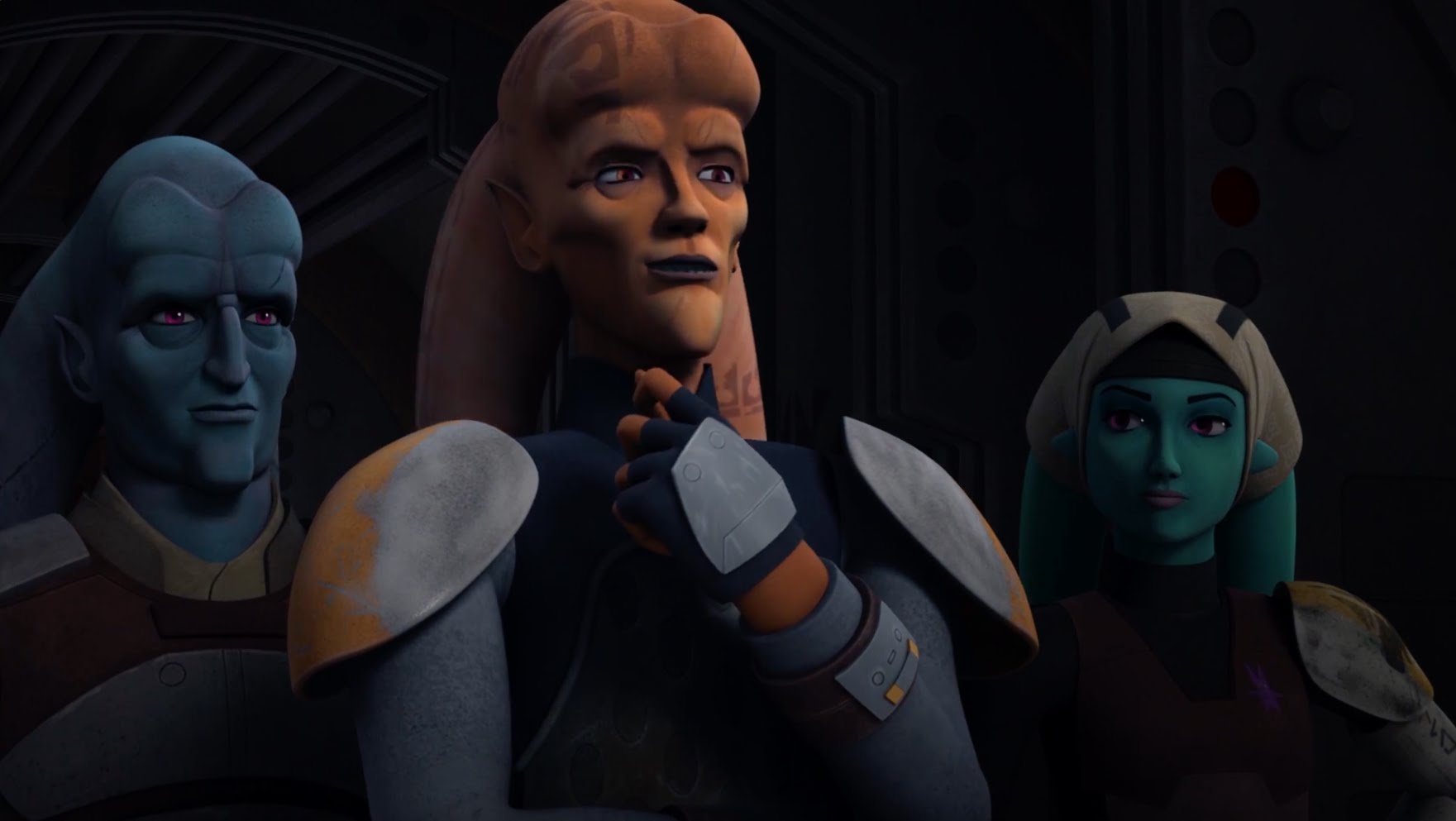 After last week’s… travesty of an episode is all I can think to describe it, comes an episode that feels like the Star Wars: Rebels we all know and love. Bringing back a face that you should be familiar with if you saw Star Wars: The Clone Wars or read “Lords Of The Sith”, this episode also brought back all the adventure and high stakes action that was missing from last week’s episode!

So let’s dive into our Five Thoughts, shall we? As always, be wary of spoilers below. It’s only a 22 minute episode, after all, I need to talk about pretty much the entire episode to get five thoughts out of it.

It’s interesting seeing him as part of the Rebellion here because what we’ve seen of him so far has shown a man who is so caught up in his causing, freeing Ryloth, that everything falls at the wayside. But more on that in a sec.

This is really why I was interested in seeing Cham show up because I wanted to see how Hera would react. If I were to pick a favourite character in all of Rebels, it would probably be Hera and I’ve been waiting for this episode to explore her backstory on Ryloth for a while now. I loved seeing the tension between Hera, who left Ryloth to become a Rebel agent helping worlds all across the galaxy, and Cham, whose idea of freedom from the Empire is purely focused on a free Ryloth. It’s a really interesting dynamic in the change of point of views and I thought it brought some interesting conflict between the two.

I also loved the little touch that Hera’s original accent slipped through when she started arguing with Cham. It was a small touch, but one that made me smile.

Remember last week, where barely anything actually happened all episode? Well, it feels like this episode was trying to make up for it by cramming in as much action as it could as the Ghost crew teamed with Cham and his crew to hijack an Imperial cruiser. Bringing back the Quasar cruiser from Star Wars: Rebellion and the TIE Bombers from The Empire Strikes Back, this whole setpiece was pure nostalgia for me combined with solid action as the Rebels take control of the cruiser and have to fend off the TIE Bombers as a modified version of the TIE Fighter Attack theme from A New Hope plays.

I don’t want to keep harping on about last week’s episode, but this episode was a perfect example of using a large action setpiece as the backdrop of character development (Cham and Hera’s relationship slowly repairing) instead of having the characters just talk about how they’re being developed. Ugh, I’m still annoyed about last week.

Between this line and Cham’s initial betrayal of the Ghost crew, I thought it was interesting that Cham, over the years, has went from noble freedom fight to… well, Magneto, basically. Even turning on those that are on his side to focus on only his goal, we see Cham go from the legendary Liberator Of Ryloth to a man so consumed with freeing Ryloth that he has lost sight of any other goals.

To see him betray the Ghost crew and potentially sacrifice a victory for the Rebellion purely to ensure Ryltoh’s freedom was heartbreaking for Hera and I loved seeing Hera prove him wrong at every turn.

You know what? I’m not done talking about last week’s episode. Last week spent all 22 minutes reiterating Ezra’s empathy through the Force at the sacrifice of literally all other plot. This episode, in just one small scene, showed that and more as Ezra finally pulled off a successful Mind Trick against the Imperial captain. It was a small scene that immediately showcased that Ezra is growing more powerful in the Force, but it was part of a larger plot instead of being the entire plot of the episode.

I don’t know what happened last week, but I’m so glad this week’s episode fixed so many of its problems.