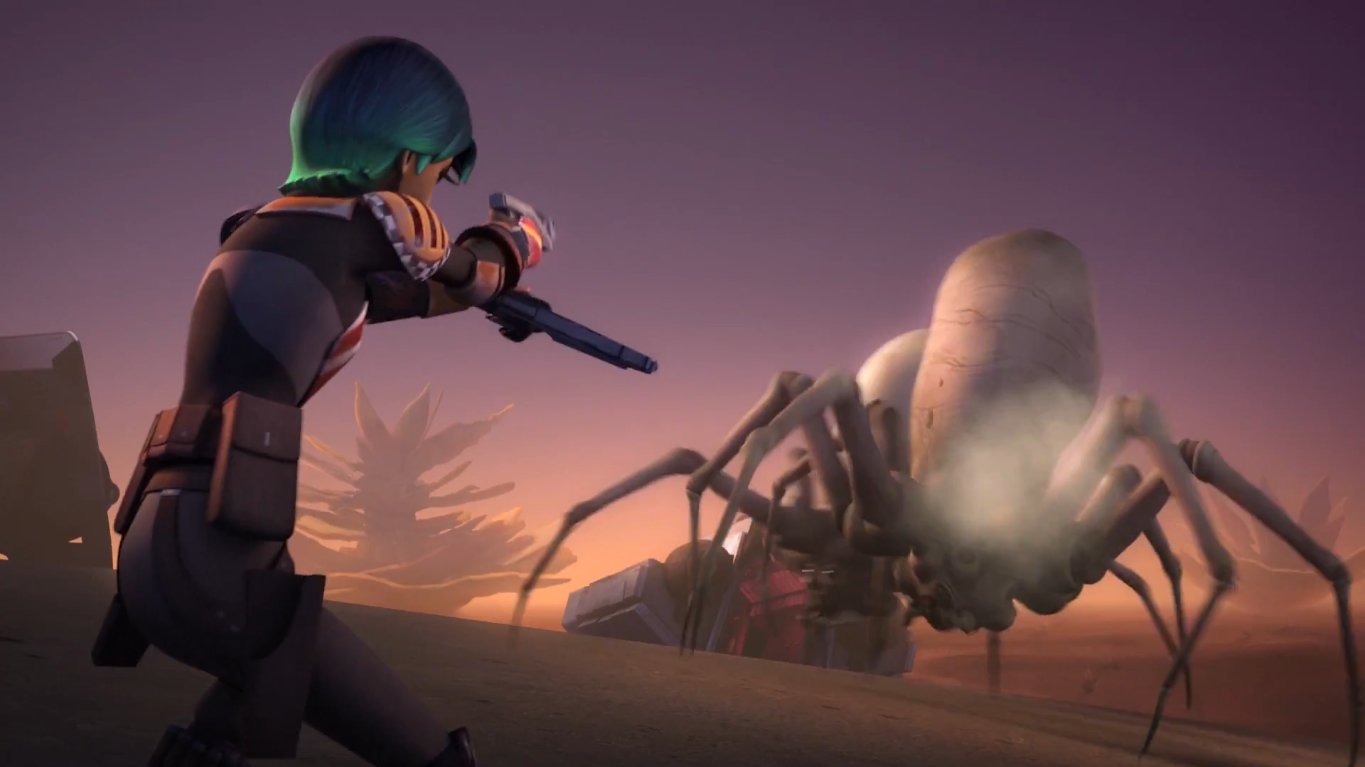 After last week’s less than stellar episode (which I actually like less and less the further we move away from it), Star Wars: Rebels decides to make it up to me with an excellent penultimate episode of their second season. With the Rebels getting situated on their new base and Kanan and Ezra preparing to face the Inquisitors, they realise their new home might be as safe as it first seemed.

Let’s dive into our Five Thoughts on the Star Wars: Rebels‘ “Mystery Of Chopper Base” and, remember, there’s a spoiler warning in effect!

1. Ezra’s Training Is Getting… Intense

This was something I was interested in seeing as it followed up from ‘Shroud Of Darkness’ from a few weeks back, the idea that Kanan has upped Ezra’s training regimen not just in response to the threat of the Inquisitors, but the possibility of Ezra falling to the dark side. I feel like this is going to be one of those moments where Kanan becomes more and more afraid of Ezra that he holds him closer and ends up pushing him away more.

You know, just like… ach, who does that remind me of?

All kidding aside, I’m interested to see where this goes – especially in next week’s finale – because I’m still waiting for Ezra to feel like a wholly unique character and not some strange amalgamation of Luke and Anakin’s personalities.

2. “At least there’s nothing trying to kill us…”

So this was all a bit Starship Troopers, wasn’t it? I actually really enjoyed this episode, much more than I thought I would. That might have something to do with my disappointment in last week’s episode, sure, but this had some great drama and a great monster movie plot with high stakes and the bittersweet undertones of knowing this’ll be final time we see the Ghost crew fighting together for this season (more on that next).

Also: spiders are the worst and seeing these weird spider/crab/squid things die a lot made me happy. I’m but a girl of simple pleasures.

3. Parting Of The Fellowship

So, yeah, it’s been pretty much confirmed by Pablo Hidalgo on this week’s Rebels Recon (which, I maintain, is essential viewing if you’ve been keeping up with Rebels) that this episode is our goodbye to Hera, Sabine, Zeb, Rex and Chopper before the finale which will entirely focus on Kanan, Ezra and Ahsoka.

This is a good move, I think, because it (hopefully) keeps the already hour long finale from feeling cluttered and allows it to focus entirely on the Jedi storyline now that the Rebels have found their base.

It also meant we finally got a moment between Hera and Kanan where they were close to admitting how they feel about each other because everyone else can see it from a parsec away. It was a beautiful goodbye, framed by the sunset, and I’m gonna miss the Ghost crew until we next see them.

One thing I was always critical about with Rebels was the shift in art direction after The Clone Wars. It was likely necessary to give each show it’s own identity lest it feel like Rebels is just a sequel to The Clone Wars and not it’s own thing within the same universe, but the focus on the softer, McQuarrie-inspired designs and the lower Disney XD budget meant some of the animation felt much less visually appealing to me than what had come before.

Still, the show does have its moments and this episode was one of them as the art direction on the planet, from the coral structures to the McQuarrie-inspired creatures to the soft lighting and purple haze in the clouds, it felt genuinely beautiful to watch.

So we’ve seen a big push lately to remind us of how Ezra uses the Force for empathy, right? We got that episode about the space whales and here we see something we haven’t seen yet: a creature that doesn’t respond to his empathy. The squidcrabspider thing not only doesn’t respond to Ezra’s empathy, but ends up seeming angered by it. This is maybe the first time we’ve seen Ezra fail at something he’s been inherently good at and the episode makes you know that this bothers him by playing faint notes from the Imperial March over Ezra’s epilogue to the episode leading into the finale.

Remember how I said Ezra felt like an amalgamation of Luke and Anakin? I think he might be more of the latter…