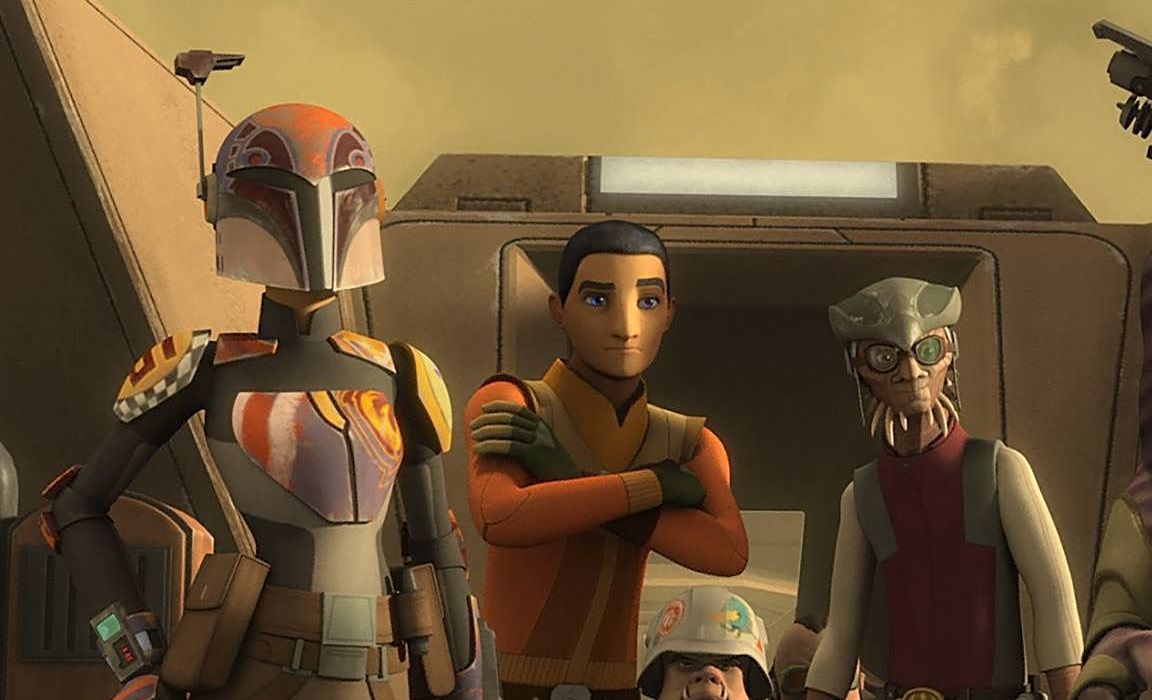 Welcome back! Did you miss me? Well, I mean, I never actually went anywhere because I still write for the site every week, but Star Wars: Rebels sure did and now it’s back! Season 3 has kicked off in a big way with a double sized first episode, ‘Steps Into Shadow’, and it is a doozy!

Without any further ado, let’s dive into our Five Thoughts on Star Wars: Rebels‘ ‘Steps Into Shadow’! But I should warn you: there will be spoilers ahead.

1. Back In The Action, But With Changes A’Plenty

Rebels‘ second season ended in a huge way with many revelations for our merry band of rebels, the Ghost crew. Maul is still alive and out in the wild, Kanan has been blinded, Ezra is in the possession of a Sith Holocron, Ahsoka may or may not be dead and Vader and the Empire are aware that there is a larger Rebellion at work in the Galaxy. Put it this way: it’s a hard time to be a Rebel. Not only that, but there’s been a lot of big changes in the interim between then and now. Kanan is in a self-imposed exile, torturing himself with guilt over the events of Malachor. Ezra is older and has more responsibility as a leader, but is brash, headstrong and quick to anger (remind you of anyone?). He even has a new haircut to boot! And the Empire has turned to a man whose deadliness is unmatched to root out the Rebels, but we’ll get to him in a second.

This episode really benefitted from the longer running time in part because it allowed for essentially two episodes worth of storyline running parallel to come together in a fantastic climax and also because the opening scene could show the time that has passed. By showing the Ghost crew in the middle of a mission, a number of opportunities allowed for the showcasing of Ezra as an older and more arrogant character through his actions more than anything else. Particularly the use of the Jedi mind trick shows that this is not, in many ways, the same Ezra we left in season two.

2. Kanan, Bendu & An Imbalance In The Force

In one of George Lucas’ early drafts, the Jedi Knights were known as the Jedu-Bendu and were once the bodyguards of the Emperor of the Galacy before they lead a rebellion against him and were replaced by the Knights of the Sith. In similar early drafts, the light side of the Force and the dark side were referred to as the Ashla and the Bogan, respectively. It’s interesting to me how this episode used The Bendu, the Force-sensitive creature on Atollon, as a creature of balance in the Force. Kanan, as a Jedi, has strived to eliminate the Bogan from himself, and connect only to the light side of the Force, the Ashla.

In the Legends comic series, “Dark Of The Jedi”, the Je’daii looked to their moons, Ashla and Bogan, for guidance in the balance of the Force. They saw balance as an acknowledgement of the light and the dark, without one overpowering the other. Luke Skywalker is the only Jedi we’ve seen truly achieve this kind of balance in the canon Star Wars stories so it’ll be interesting to see if this season revisits The Bendu and his teachings as part of Kanan’s quest for balance.

Also, I just want to hear more of Tom Baker in Star Wars.

Let me tell you a story: earlier this year, in July, I attended Star Wars Celebration 2016 in London. It was one of the best weekends of my life. One of the best moments, though, was seeing the world premiere of the trailer for this season of Star Wars: Rebels and the reveal of Grand Admiral Thrawn. Everyone went nuts. I have never been part of a fan reaction like that. There was screaming, there was cheering, there were honest-to-god tears. This is a moment Star Wars fans have waited decades for… and they nailed it.

From the look to the mannerisms of the animation to the voice from Lars Mikkelsen, this is a frankly astounding take on Grand Admiral Thrawn that is pure menace. His introduction here, particularly that one fade transition that has his eyes lingering over the Phantom, shows a methodical and tactical thinker that will play a long game throughout the season and I cannot wait to see how that plays out.

4. Ezra, And The Hubris Of Youth

I’ve talked a bit about Ezra already, but this was really his episode. Feeling betrayed by Kanan’s self-imposed exile and suddenly without guidance, his quest to become stronger has lead him down a path of temptation towards the teachings of the Sith holocron. He is the one stepping into the shadows, being pulled there by the promise of ensuring his friends are safe. It’s a fascinating way of showing the temptation of the dark side of the Force and the kind of arrogance that comes with that power without going all, well… this.

It’s also fascinating to see how the dark side tempts those who are afraid to lose what they have because they are those that have already lost so much. Anakin was afraid to lose Padme after losing his family and his home. Padme was all he had and so he was afraid that if he’d lose her, he’d have nothing. The Jedi teach its practicers to let go of attachment because holding on too tight can lead to the same result as having something taken from you.

Ezra learned this episode that if he lets go, Kanan will still be there to catch him, but I’m interested in what happens when he lets go and he falls.

One of the things the end of this episode did well is something that The Clone Wars did very well which is putting the teachings of the episode into action. This episode was all about letting go and having the strength to trust that someone one will be there to catch you. It’s about giving up grief and fear and letting yourself be caught and letting yourself get help. This was encapsulated by that final moments of Reklam Station when a blinded Kanan tells Ezra that he will catch him if he lets go from the plummeting station.

This moment re-solidifies their relationship in a lot of ways and brings Kanan back into the fold of the crew after his exile and was a massive moment for Ezra after experiencing his hubris come back to bite him in the ass. It was a great moment and showcases the fantastic storytelling of Rebels and promises a fantastic season to come.

What a fantastic episode.