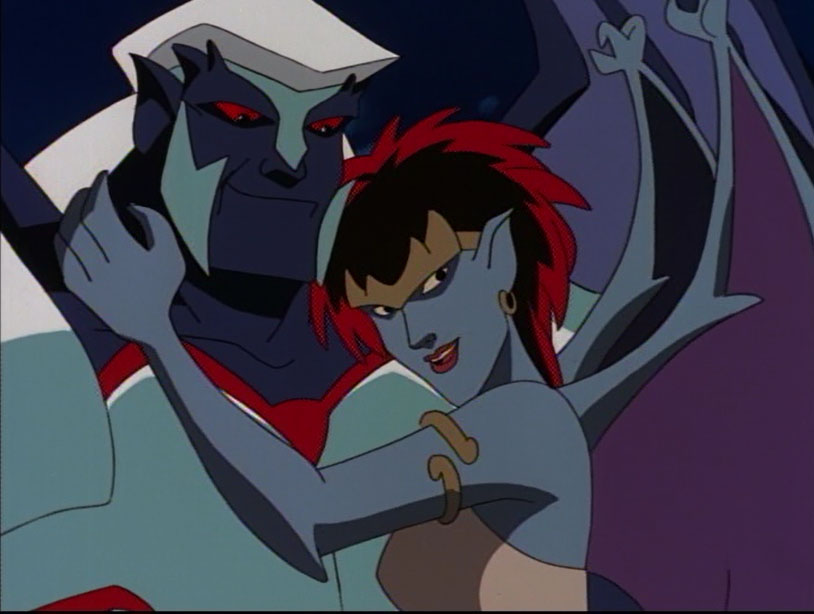 “We live again!” The return of our Summer TV Binge also marks the reawakening of our weekly Gargoyles retrospective, looking at Disney’s cult classic series that will hopefully receive a new audience on Disney+ (and prompt a reprint of the SLG comics, and maybe even a Jordan Peele movie). In any case, we continue our look at the ‘Avalon World Tour’ arc of season 2 with “Golem” (which aired December 14, 1995), and “Sanctuary” (December 18, 1995).

As you might expect from the title, “Golem” sees Goliath, Elisa, Angela, and Bronx stepping off their boat in Prague, and encountering the legendary clay defender of the ghetto. While the word “Jew” isn’t uttered once in the episode, this half-hour is utterly steeped in Jewish mysticism, with heaps of Hebrew incantations, a reference to Rabbi Loew, and a flashback to the man himself creating the golem to protect his people from an attack in 1580. 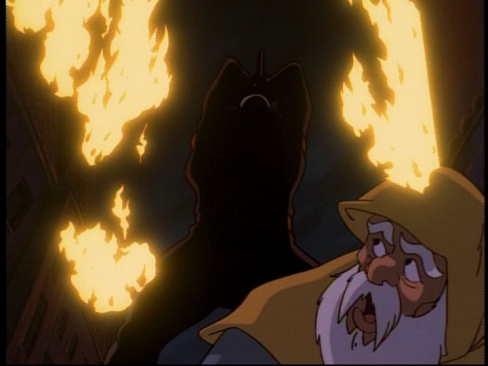 There’s even a reference to Micah 6:8 at the end, which Rabbi Loew’s descendant describes as the “wisdom of our people.” It appears the show’s staff trusted their young audience to recognize all these as aspects of Jewish culture, although more cynical viewers may argue not naming them as such was an unwitting form of erasure – I’d love to know what our Jewish readers think here.

Goliath finds his billionaire acquaintance Renard (from “Outfoxed“) is in Prague, and things between the two get testy again when we learn he’s hired a local mobster (Tomas Brod, voiced by Clancy Brown) to steal the golem from his current guardians. Renard is old, and he transfers his soul into the warrior to feel young again, but after walking the streets flexing his muscles like a jerk – bending a lampost, smashing a car, and demanding our heroes hand over a book that could undo the spell – he comes to his senses, realizing being incredibly powerful is warping his soul. I’m impressed Goliath and co. convinced him to stop being foolish without asking him the simple question – why would you want to live out your life as a clay man? You wouldn’t be able to eat, drink, sleep, or feel, it’d be the worst.

3. A Cell Phone Would be Handy Though

After helping the Gargoyles and the present day Loew arrest Brod, Renard and his assistant Vogel offer our touring quartet a life back to New York, but Goliath refuses, realizing Avalon has kept taking him to places that need his intervention, and so he’ll continue taking the long way. (Elisa, similarly, feels she needs to stay by her man.) That said, I think Renard could’ve given them a phone – those did exist in the ’90s after all. I don’t know if they’d get any reception, but Elisa seemed fine using a payphone to call her parents in the next episode so…

In “Sanctuary,” the gang arrive in Paris, much to Elisa’s surprise (even though “gargoyle” is a French word), and discover Demona and MacBeth are now dating (the latter no longer having any recollections of her human form in “High Noon“). Turns out, Demona has formed a pact with Thailog to marry her way to MacBeth’s fortune, with Thailog hoping the inevitable sudden betrayal will escalate in the duo finally killing each other, thereby granting him their combined estate.

Thailog gets a new look in the episode, decked to the nines in silver armor with red lining: it really helps make him stand out more than his first appearance, where he was just a color-swapped Goliath. It symbolizes his avarice externally as well, and also underlines something else I really like about the Gargoyles – that they’re basically humanoid dragons. In that sense, Thailog becomes the show’s take on the classical dragon who hoards gold and treasure, with his new armor recalling Smaug’s jewel-encrusted belly from The Hobbit.

Despite all the lovely establishing shots of the Seine, the Eiffel Tower, and Notre-Dame (which are quite poignant now even though it’s not gone), I struggled to believe this episode was set in Paris because Goliath, Angela, and Bronx’s fight with Thailog looked like it took place on an American rooftop – Parisian rooftops are nowhere that flat, nor is that what a French water tower looks like. I suppose it’s easy to nitpick the art department for not being able to look up French architecture in a pre-Google age, but the New York water tower design definitely feels like a case of corners being cut due to the 52-episode order for season 2. 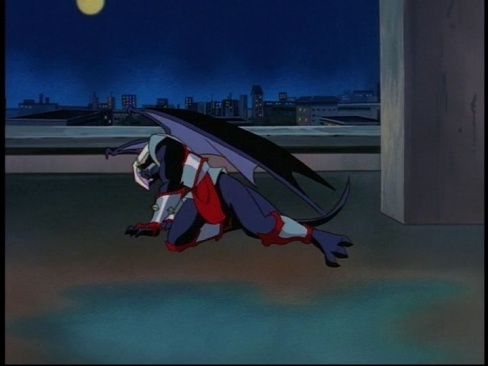 When you spend all your money on a new costume instead of a new set and backdrop.

Bonus thoughts:
– Clancy Brown also voices Brod’s ancestor during the pogrom flashback, a potent reminder our historical shames are never as distant as we’d like to believe.
– Probably reading too deep into when this was made, but I have to wonder if Tomas Brod’s rise to power in the Prague underworld was a result of the post-Soviet power vacuum.
– I’m surprised the boat from Avalon doesn’t capsize when Goliath, Angela and Bronx turn to stone – magic everyone!
– Elisa working out Demona and Thailog’s scheme by thinking out loud at a cafe is unintentionally funny – not doing much to improve the French image of Americans there I’m afraid.
– We learn MacBeth doesn’t feel Demona’s pain when he’s far away.
– Angela learns Demona is her mother – what this portends, I cannot say, as I never got this far as a kid.
– As you might surmise from Demona’s hair in the featured image, this show really needs a HD restoration.