On this week’s retrospective of Disney’s Gargoyles, we look at “M.I.A.” (which aired December 21, 1995), and “Grief” (December 28, 1995). The former sees Goliath, Elisa, Angela, and Bronx encountering the London Clan of Gargoyles, while the latter episode brings back the Pack for another round in Giza, Egypt.

I know Goliath’s clan are from Scotland, which is way up in the north of the UK (until the next referendum, obviously), but I got a huge kick from him and his family to my hometown – I can only imagine how I’d have reacted if I’d seen this episode as a boy. I think it’s hilarious that the show’s designers made the London Clan – Leo, Ursa, and Griff – look respectively like a lion, a unicorn, and a griffin, because it’s so stereotypical, I mean by that logic Goliath’s “Scottish stock” should’ve looked like talking haggis or bagpipes. 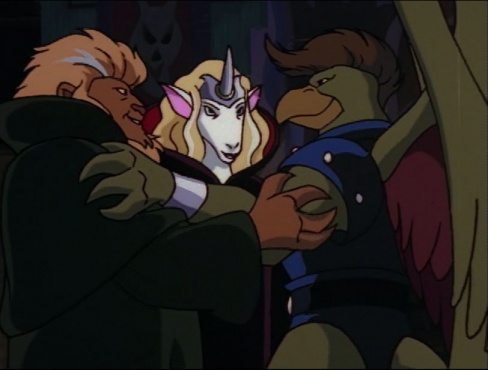 At the same time, they’re so cartoonish, you absolutely buy the idea they can run a kooky magic shop unperturbed because everyone thinks they’re costumed weirdos. I love that they’re based in Soho as well, which demonstrated someone on the show was more familiar with London than the laughable presence of all the punks on the streets or the designs of the local Gargoyles would suggest.

Leo and Ursa are none too pleased to meet Goliath, explaining they assumed he died with Griff during World War II. Understandably confused, since he was still trapped in stone at the time, Goliath uses the Phoenix Gate to go back in time to figure out what happened. Early on in the episode, Elisa is told by a cabbie that a statue of a Spitfire plane commemorates the Blitz and the Battle of Britain, and boy, he wasn’t kidding: the episode really does conflate the two, with Goliath finding the RAF and Luftwaffe duking it out above war torn London, even though in reality, it would’ve been impossible for dogfights to take place over the blacked out city. I’m guessing the show’s staff just really wanted to see Gargoyles participating in aerial combat, instead of doing something more plausible like having Goliath and Griff board and sabotage a German bomber. That’s perfectly understandable, as bothersome as a city not going dark during an air raid is.

Goliath eventually realizes this is all a paradox and brings Griff back with him to the present. After the tourists depart, Griff explicitly resumes his battle against Nazis when he comes across the punks threatening a South Asian guy for disrupting “English purity.” (They should’ve really been skinheads.) Throughout the episode, I wondered if you’re even allowed to say “Nazi” on a kid’s show anymore, and here you have a Disney superhero explicitly calling out English fascists as one and the same. As Griff sadly says, yes, the more things change, the more things do stay the same: God, I wish we really did have the London clan around to beat up the racists that are – somehow – still lumbering around 15 years after this episode.

“Grief” sees the tourists disembarking their boat on the Nile, and discovering the Pack are underneath the Sphinx building a device for an Emir that’ll summon and trap Anubis: we learn the bereaved noble wants to blackmail the ancient god into resurrecting his son, who died in a car accident. Once captured, Anubis, who is voiced by the late, great Tony Jay (Frollo in Disney’s Hunchback of Notre-Dame), calmly, memorably intones to the Emir, and by extension the show’s young audience, that it would unfair to resurrect his son, as death is the only fairness – I’m pretty much convinced by this point no one at Disney was actually reading the scripts, as this is potentially upsetting stuff. Don’t get me wrong, it’s true, and it was probably helpful for a lot of kids who lost a loved one, but it is certainly not light-hearted.

The Emir attempts to merge himself with Anubus, but Jackal can’t pass up this opportunity and interrupts him, thereby becoming the living embodiment of the canine god himself. He promptly goes mad with power and begins zapping everything with entropy for laughs, until the heavily aged Goliath and Angela distract him long enough for the Emir to unwind the clock with the Scroll of Thoth. And speaking of rewinding, it’s pretty strange Jackal turns Hyena and Wolf into infants instead of decrepit versions of themselves, despite being the avatar of death, not time travel. I came away from the episode wanting baby versions of Goliath et al., until I realized Baby Pack was the discrepancy, not the other way round. Just as well – it’s not like a baby Goliath could’ve coordinated against the power-crazed Jackal. 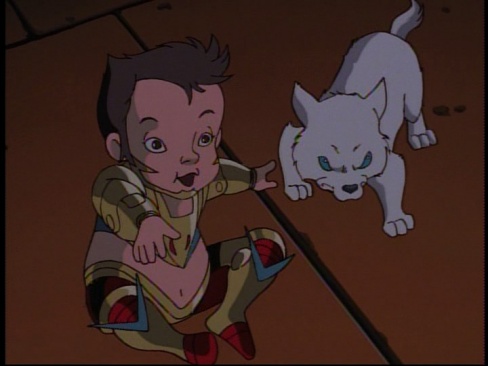 Disney were fools not to do a whole toy line.

Bonus thoughts:
– I’m baffled that Coyote’s head survived despite being very visibly crushed by Goliath in “Upgrade” – Xanatos probably rebuilt it, so why does it sport the same battle damage as the previous model?
– Some of the fight scenes have gotten pretty repetitive, with characters constantly tossing opponents against the wall – “Grief” does liven it up a little though by having the tourists battle the Pack inside an unlit tomb, which forces them to be sneaky.
– Goliath confirms Gargoyles only live twice as long as humans.

See you all next week for the further adventures of the Avalon tourists in 1996, as well as the return of the rest of the Manhattan Clan in “Kingdom.”