Today on our weekly revisit of Disney’s Gargoyles we’re looking at “Ill Met by Moonlight” (aired February 22, 1996), which begins to draw the Avalon arc to a close with the first appearance of Oberon and Titania, who are none too pleased about the clan that’s settled on the island during their millennium long absence. (We’ll also look very briefly at “Future Tense,” aired April 25, 1996.)

“Ill Met by Moonlight” opens with Goliath, Elisa, Angela and Bronx returning once more to Avalon, and getting well and truly homesick after all the tasks the island has sent them on. Angela suggests her brethren Gabriel could’ve come along for some of their voyages, which I agree, would’ve shaken things up a little. Oddly, Goliath asks Gabriel, Tom and Katharine if things have been peaceful since their return, which is weird: does he ask that every time they come back? It feels like a remnant of an earlier version of the episode, before the writers realized Goliath and co. would need to return to the island between adventures given how long this storyline became.

Oberon and Titania finally show up with the Weird Sisters in tow, and threaten to bury everyone alive for daring to set foot on their land. There’s a lot of backstory crammed into this confrontation (a dialogue scene that dominates the first half of the episode), which reveals the King of the Fairies (sorry, the Third Race) divorced his Queen and banished her – and all their subjects – to live among mortals for 1000 years to learn some humility.

Ironically, Oberon (he’s nothing if not consistent)’s time among mortals has not impressed him, while she has developed compassion for them, and proposes a game for possession of Avalon. All of this is conveyed in cod-Shakespearean language, which I can navigate as a nerdy adult, but it’s dialogue kids might’ve found dull or confusing – which might not have been a bad thing, since it makes Oberon’s people seem more mysterious, but still.

After Oberon departs the castle to do battle with Goliath, Angela and Gabriel, Elisa suggests using silver to kill the fanged fiend – small wonder, he looks like Dracula, with his pale blue skin, and cape and collar. (Giving a vampire blue skin seems to be a common trend in cartoons, eg. Digimon and Avengers Assemble). I feel the show’s designers veered heavily into the previously established notion that the Third Race were the Dark Elves of Norse mythology, and looked strongly to Walt Simonson’s version from his “Mighty Thor” run a decade before: 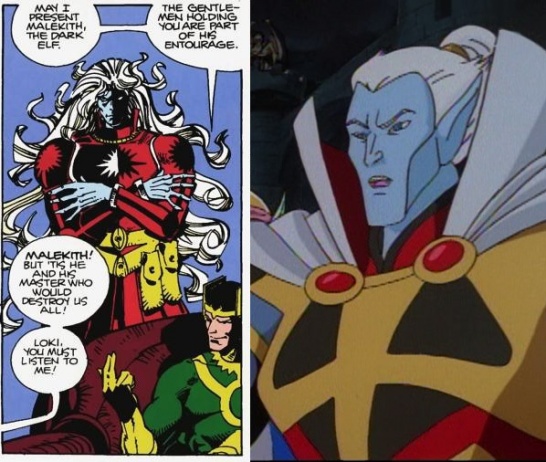 Basically, I’m saying that Oberon looks like Malekith the Accursed, who back then would’ve been known as a new, exciting and charismatic villain from that seminal series, instead of the boring villain of one of the weakest MCU movies. It makes perfect sense that the crew, who were likely struggling to work out how to make a fairy look intimidating while still feeling like one (probable design brief: no pixie wings), looked to a villain as striking as Malekith and borrowed his glam rock aesthetic. (Oberon’s dogged pursuit of the gargoyles also recalls the myth of the Wild Hunt that inspired Simonson’s character.)

4. Favor for an Old Friend

Anyway, Elisa is informed Oberon’s weakness is iron, hence why he flinched when she aimed her pistol at him (it’s funny to think she could’ve pistol-whipped him into fleeing). Solving a riddle Titania gave her before the hunt commenced, she has Tom melt down and turn the pistol into a bell, which causes Oberon to recoil in defeat when struck: I love that Elisa is smart enough to understand such a weird riddle, and that it’s in engineering an offer of mercy that she gets him to concede defeat.

After Oberon makes the gargoyles his honor guard, Goliath asks Titania why she assisted them like that: she responds that she was repaying a favor, confusing the big guy, since they’ve never met before. Titania is voiced by Kate Mulgrew, who previously played Fox’s mother in “Walkabout“: it’s pretty clear she’s not just pulling double duty, and Xanatos’s family is going to factor heavily into the culmination of this storyline…

5. Dreams of Future Past

The conclusion is put off by one more episode in “Future Tense,” an extended dream sequence where Puck casts a spell on Goliath, causing him to believe he’s returned to a dystopian New York now ruled by Xanatos: Hudson is dead! Brooklyn and Demona are an item! Broadway’s blind! Bluestone is cool! Xanatos and his son are playing Luke and Vader in virtual space, and Xanatos is now basically Ultron! Lexington was the true villain all along! (Until it turns out to be Puck!) And on and on – it’s a filler episode which feels increasingly melodramatic (which foreshadows the reveal I suppose), but it’s beautifully animated, nightmarish filler.

Ultimately, the episode’s main purpose is to reintroduce Puck in time for the Avalon arc’s conclusion, and to write out the Phoenix Gate, which turns out to be what the trickster is trying to manipulate Goliath into handing over: Puck wants it so he can delay the Gathering, and stay in our world for longer. In the end, Goliath uses the Gate to open a time portal and tosses it in there, closing the loop once and for all.

Bonus thoughts:
– I’ll go into this more next week, but the animation in these episodes was superb, with Oberon’s pursuit of the gargoyles into a volcano looking as atmospheric as any of Disney’s theatrical films at the time, while at times “Future Tense” resembles anime classics like Akira and Ghost in the Shell.
– Titania’s revealing outfit is pretty dated.
– Oberon using his magic to sheath himself in crystal makes him look like a skinnier Box from Logan’s Run.

Next week: ‘The Gathering’ finally ends this circular trip in spectacular, epic fashion.