This week on the Gargoyles Summer TV Binge, we look at Goliath, Elisa, Angela and Bronx’s visit to New Olympus in “The New Olympians” (aired February 14, 1996), and Guatemala in “The Green” (February 15, 1996).

Let’s get this out of the way: “The New Olympians” is not a great episode. Animated by Sunwoo (one of the weakest studios on the show), it sees the Avalon World Tourists arriving in New Olympus, a hidden island populated by the descendants of the creatures that the Ancient Greeks tried to wipe out. Naturally distrusting of Elisa, they lock her up to prevent her from revealing their existence to the rest of the human race, prompting Goliath to break her out – only for things to descend into a farce when he’s tricked into letting out a shapeshifting murderer named Proteus (Roddy McDowall). 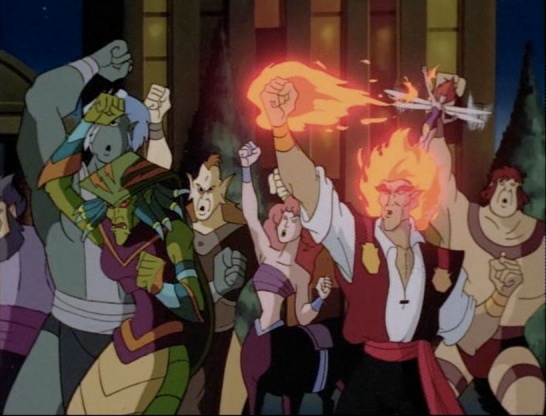 So many weirdos, so little time.

The episode establishes a fascinating locale (think Wonder Woman’s Paradise Island reimagined by Jack Kirby), and has a solid if simplistic anti-racism message, but ultimately, it packs in way too much backstory and worldbuilding, without enough time to flesh out all these characters. According to Greg Weisman, this episode was a backdoor pilot for a spin-off show, and it sure feels like it, with all these fantastic characters crammed into a single part of the World Tour arc, when it should’ve been given room to breathe across a two-parter. Ironically, this rushed introduction is probably why there was never enough interest generated for the proposed show.

Moving on, “The Green” is a much better episode (beautifully rendered by Walt Disney Animation Japan), that sees the World Tourists meeting the Mayan Clan of gargoyles in Guatemala. They are at war with the loggers cutting down the rainforest, who have now enlisted the aid of Jackal and Hyena (now armed with jetpacks). The Mayan Clan, consisting of Obsidiana, Jade, Turquesa and their leader Zafiro, are easily the coolest looking clan we’ve met yet, with their beautiful indigenous robes, jewellery, and distinct skull crests; Zafiro himself looks spectacular, resembling a feathered serpent instead of a typical gargoyle, in a wonderful nod to Mesoamerican mythology that does a much better job of distinguishing his species than the goofy looking London Clan. 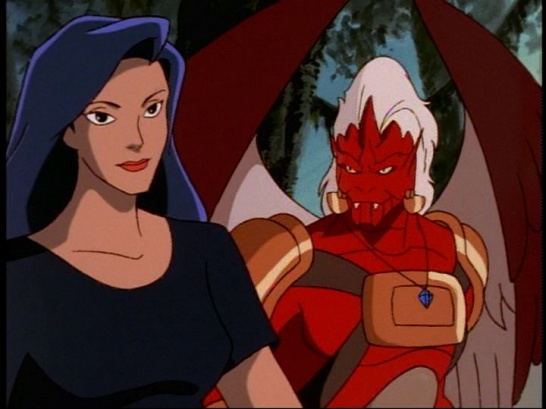 The Mayan Clan are staunch protectors of their home, an ancient pyramid in the forest, and its rare and diverse medicinal plants. They have no qualms about attacking the lumberers, something Elisa grows concerned about, since those men need to work to feed their families. It develops into a rift between her and Goliath, which is a surprisingly mature, nuanced take on environmentalism in a kids’ cartoon. Like I said, trouble in paradise.

It turns out the company that’s contracted the lumberers and Jackal and Hyena is Cyberbiotics, which is now under Vogel’s control since Renard has become too ill. Given he was introduced as a treasonous little worm, it shouldn’t have been too surprising to see Vogel be so ruthless, but it was still shocking to see him relapse. It’s a striking decision to have a background character return to his villainous ways, because it portends a lot for future episodes, but also since it shows younger viewers people can’t always become as decent as we might hope.

The Mayan Clan are able to withstand sunlight thanks to magical necklaces, which are powered by a disc that is stored all the way up north in New York’s Metropolitan Museum of Art. Jackal sends Hyena there to destroy the disc, knowing it’ll enable him to smash up and kill all the gargoyles during the day. However, she’s followed by Broadway and Lexington, who, after defeating her, consider destroying the artifact anyway, since they don’t understand why she wanted it. It leaves you on the edge of your seat during Jackal’s climactic confrontation with the gargoyles, as you’re well aware the clock is ticking until dawn – fortunately, the Sun rises and it turns out reason prevailed, with Broadway and Lex subsequently shown as taking the disc back to the Clock Tower. (And that, kids, is why it’s wrong to loot other countries’ stuff.)

By the way, it was theorized back in “Metamorphosis” that gargoyles turn to stone during the day to feed on the Sun’s rays, as they require so much energy. Either the Mayan Clan are permanently exhausted, or Dr. Sevarius was wrong – possibly the latter, given gargoyles would likely need to hibernate throughout winter. I have so many more questions now though – like what is winter like in Guatemala? And why do gargoyles turn to stone?!

In the end, the Mayan Clan tethers a raft carrying loads of plants to the World Tourists’ boat, so they can seed and preserve the endangered species in Avalon. (I suppose Avalon’s magic would allow them to grow properly.) It confirms something I hadn’t wondered about previously, namely that Goliath and his companions go back to Avalon after each adventure, which is good – it didn’t seem like Elisa’s been staying in hotels before getting back on that boat, and hoo boy, could you imagine how hungry and smelly she’d be if she was going to all those countries back-to-back? Y’know, there’s probably quite a lot of fanfics that explore the tranquil pauses on Avalon between each mission… 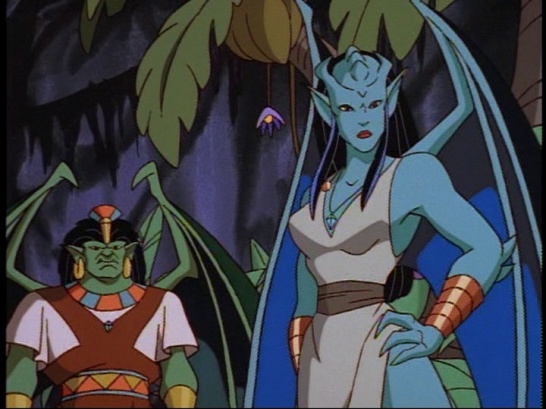 'You ever saw us migrating to become gardeners too?'

Bonus thoughts:
– I like how Goliath uses his wings as a sail when the Avalon boat is going too fast.
– How does that New Olympian – Helios, the one whose head is on fire – sleep without setting his bed alight?
– Elisa going sans jacket because of the heat in Guatemala is a nice touch of realism.
– It’s strange Broadway and Lexington leave Hyena on the police’s doorstep without something to restain her gadgets – just as well she’s unconscious.