This week we officially venture into Gargoyles‘ apocrypha with “Ransom,” “Runaways” and “Broadway Goes to Hollywood,” a trio of episodes from The Goliath Chronicles that focus respectively on the young clan members Lexington, Brooklyn, and Broadway.

The season premiere got pretty topical with the introduction of the hate group the Quarrymen, and “Ransom” (airdate: September 14, 1996) continues the theme, with baby Alexander Xanatos getting kidnapped by mayoral candidate (and Fred Trump lookalike) Pat Doyle so he’ll look like a hero when the child is returned. (He also wants to get his hands on a gargoyle: it’s a pretty convoluted scheme.) Lexington, who adores the little boy, winds up saving him instead, giving the gargoyles some good press: a good reminder that the person politicians are fearmongering about are often better people than them.

In “Runaways” (aired September 21, 1996), Brooklyn has an argument with Goliath and leaves the Eyrie in a huff, eventually taking up refuge with three street rats involved with a crime lord Elisa is trying to take down. It’s a pretty uninvolving episode that really demonstrates – along with season 1’s Brooklyn vehicle “Temptation” – that the character is a big fish in a small pond, who needs to be away from Goliath (like in “Kingdom“) to step out of his shadow, otherwise he’s a redundant brooding lead. Like he quips at the end of “Turf,” he really needs his own World Tour to come into his own.

Going back to “Ransom” for a moment, Fox’s characterization was really bad: she has a nervous breakdown over her son’s kidnapping, when the Fox I knew would’ve never done that, and led the charge to bring him back. To add insult to injury, old man Doyle is able to shove her aside when he makes one last desperate attempt to steal her baby – how’d someone so old ambush her? This show has immortals, fairies, and mutants, but this was the first time my suspension of disbelief actually broke. 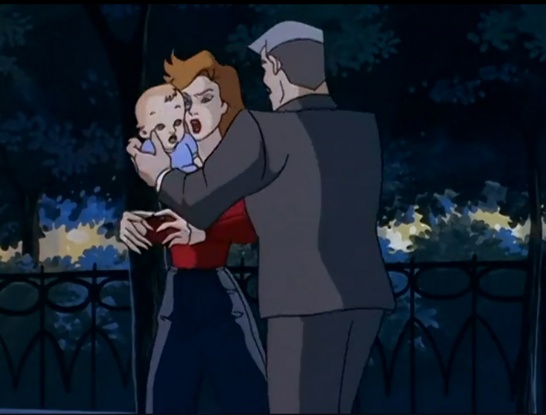 Fortunately, “Broadway Goes to Hollywood” (aired September 28, 1996) was written by someone actually familiar with the character (season 2 veteran Cary Bates), and so she’s back to her calculating and competent self for this fun romp, where she concocts a scheme to drum up some positive representation for the gargoyles by making Broadway a star. She orchestrates smuggling him out of the Eyrie, stages an accident to make him look heroic, and defies her own bodyguards to help her client when he’s kidnapped by Jackal and Hyena – it’s great seeing her take charge. (And she clearly understands why diversity is important to boot.)

4. They Did It for the Puntastic Title

As much fun as Broadway’s trip to LA is, it’s a little contrived – while it was established in “The Silver Falcon” that Broadway loves old Hollywood movies, there’s never been anything to suggest he’d want to become a star, he just liked the notion of styling himself as a hard-boiled detective to avoid being the Friar Tuck gargoyle. I wonder, couldn’t Fox have just broadcasted footage of Lex and Alex to improve the gargoyles’ image? Sure, it’d have given away they were hosting Goliath’s clan, subjecting her and her husband to further harassment, but the press is well aware her company Pack Entertainment are promoting Broadway in Hollywood. (Ooops, did I find a plot hole?)

There’s a pretty laugh-out-loud moment when Xanatos and the other gargoyles have received the news Broadway’s been kidnapped, and Goliath places his hand on David’s shoulder to reassure him that Fox will sort it out, while saying there’s nothing they can do. While it’s sweet that they’re genuine friends now, I found it was ridiculously despondent – they should’ve all been stuffing themselves into a private plane or helicopter to get to LA, pronto.

Bonus thoughts:
– “Ransom” opens with Lex stealing a toy for Alexander, which is already pretty problematic, but then the guard in the toy store mistakes him for a realistic doll – does this guy not watch the news?
– How did Doyle’s military losers successfully attack the Eyrie and kidnap Alexander anyway? That building was designed to fend off Oberon.
Continued below

– Goliath straight up murders two of Pat Doyle’s goons when he tosses the metal door that was barricading them in their direction.
– Not a great idea letting Lex hold Alexander during dawn frankly.
– All the gangsters using laser weapons in “Runaways” have really neutered the viscera of the action.
– Radar, the crime boss the street kids are involved with, strongly resembles Fagin from Oliver Twist, which is offputting given the character’s appearance is an infamous antisemitic stereotype.
– The exo-suit Fox uses to rescue Broadway is the same as the ones the Hunters use in “Hunter’s Moon,” which is annoyingly lazy.

See you next week for more of The Goliath Chronicles‘ non-canon character spotlights.