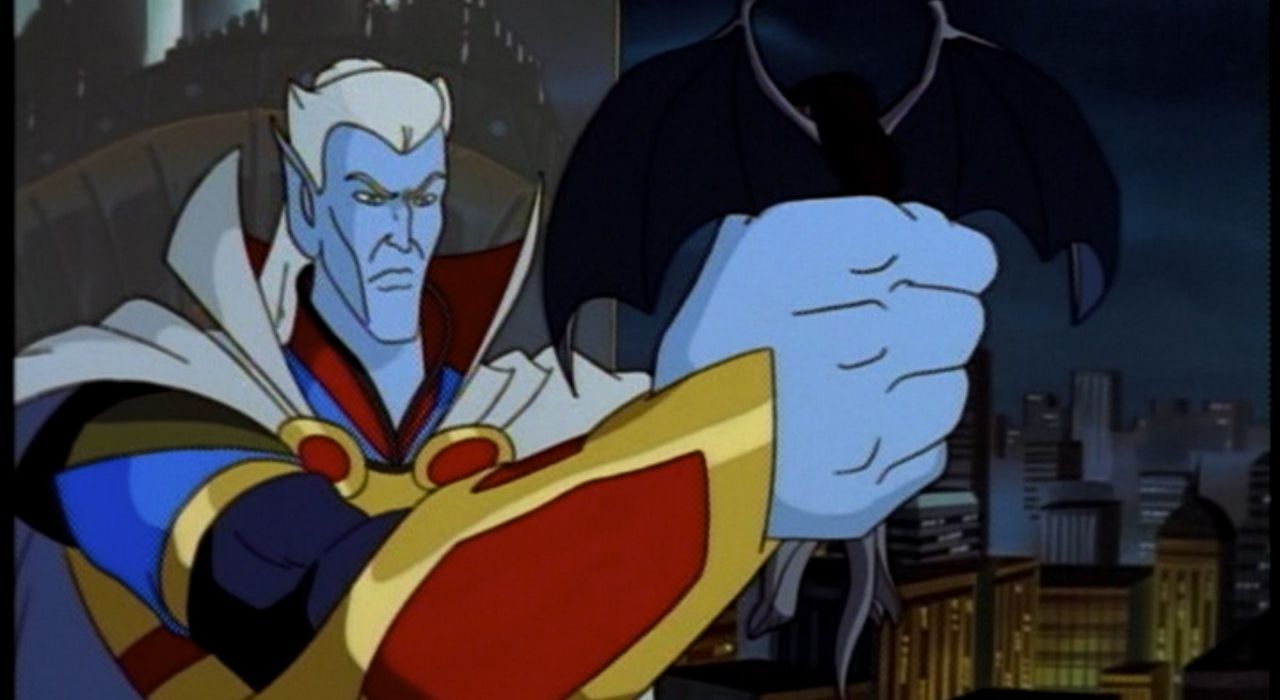 We come to it at last, “The Gathering” Parts 1 and 2 (aired April 29 and April 30, 1996), the conclusion of the Avalon World Tour arc that’s dominated Gargoyles season 2, which sees Goliath, Elisa, Bronx and Angela finally return to New York, and the birth of David and Fox Xanatos’s son Alexander. A happy ending right? Wrong – the child is Oberon’s stepgrandson, and he will bring him to Avalon no matter the cost, pulling Goliath and friends right back into the thick of it.

Part 1 confirms what “Ill Met by Moonlight” heavily hinted at, which is that Fox’s mom and Queen Titania (both voiced by Kate Mulgrew) are one and the same. That episode made sure to note Oberon and Titania were divorced during their time away from Avalon, so it’s not like her marriage to Fox’s father Halcyon Renard was two-timing: regardless, now that she’s officially back with Oberon, she wants Alexander raised on Avalon so he’ll come to understand his magical heritage (an opportunity denied to her daughter). 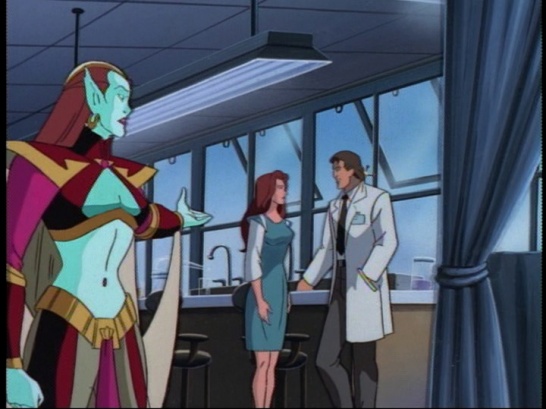 That twist is dwarfed in the second half by the reveal that Xanatos’s loyal assistant Owen Burnett is actually Puck. It’s hinted at throughout, first by Xanatos’s father Petros being struck by the resemblance between Burnett and Renard’s assistant Vogel, and then by Burnett’s abrupt resignation, which we realize is because of the Gathering. (Still, loyal to a fault, Burnett activates a contingency plan to protect Alexander, complete with Iron Clan robots.) On some level, I always knew Burnett was Puck (it has been over 20 years), but I was still surprised to learn that when he first approached Xanatos, he offered him the choice between granting one wish as Puck, or a lifetime of servitude, meaning our wily billionaire always knew – I’m already considering rewatching the entire series to see their relationship in light of this new context.

Goliath, Elisa and Bronx have an emotional reunion with the rest of the clan at the Clock Tower (and her cat Cagney), who get to meet Angela for the first time (the boys are instantly smitten, with Broadway offering her his chocolate). Afterwards, Goliath drops Elisa back at her apartment, marking the first time in forever that the two have gone their ways – you can just feel Goliath wants to linger for a little while longer at her home instead of returning to the Clock Tower, but the moment doesn’t go as far emotionally as it ought to thanks to the presence of Koko Enteprises on the animation. 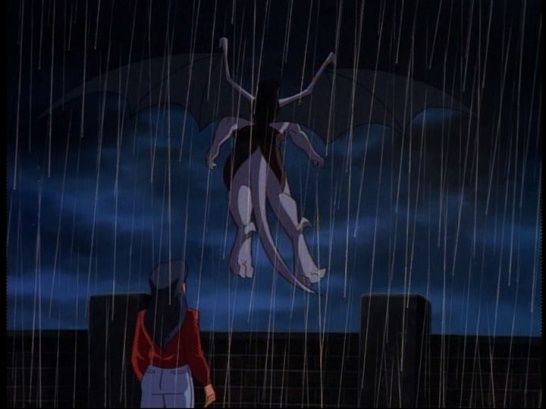 He doesn't even look back, come on.

Koko handled a lot of the big multi-part stories of this season like “City of Stone,” “Avalon,” and this: their work was solid but would often fall flat when you least expected it. (Similarly, here when Oberon expands himself to giant size to go to town on Xanatos’s tower, there are all kinds of perspective issues.) Last week, I was full of the praise for the evocative, atmospheric look of the preceding two episodes, which were animated by Animal-Ya and Walt Disney Animation Japan: it just baffles me that they were placed on those standalone episodes instead of these ones.

The first part opens with the titular Gathering on Avalon, where all sorts of characters from previous episodes are in attendence to repledge their loyalty to Oberon, leading to a fun altercation between Odin and the Banshee, who wasn’t pleased to be dragged back there. And that’s it for any previous characters, which is such a weird way to conclude this whole arc. I know this isn’t the season finale, but it was the ending to a season within the season, so it should’ve had more characters coming back to tie everything back together.

For instance, when Giant Oberon (Oberzilla? King Oberong?) is going ape on Xanatos’s defences, he brings the city’s statues to life to fend off Goliath’s clan, but since he’s appointed Avalon’s gargoyles his honor guard, wouldn’t it have been dramatic and heartbreaking if he’d summoned them? Also, Oberon’s cast a sleeping spell over humanity to keep them out of all this, which understandably keeps away Arthur or MacBeth, but what about Griff, or Talon’s mutates? What if Goliath had a transponder that allowed him to summon the New Olympians? (And despite that sleeping spell, Renard is still able to bring his helicarrier into battle, even after the first half heavily hints he’s finally gone senile in his dotage.) All in all, it’s a pretty underwhelming battle in the second part.

What’s not underwhelming is the final confrontation between Oberon and Fox in her bedroom as he attempts to snatch away her child, and she responds by becoming enraged enough to finally tap into her magical heritage, and blast him through the wall. Gosh: this show demonstrated a mother’s love was the most powerful magic of them all, two years before Harry Potter and the Chamber of Secrets also revealed that was how Lord Voldemort was defeated by a baby. 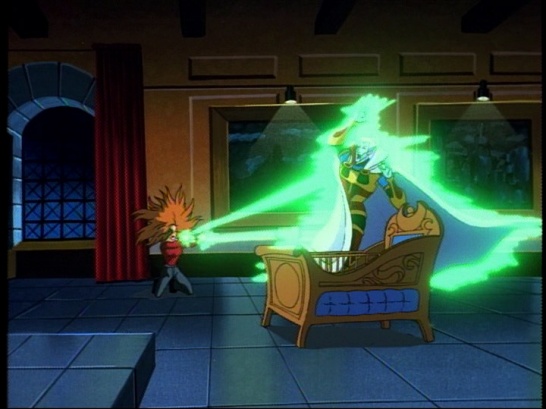 Goliath realizes the child doesn’t need to be taken to Avalon to master their powers, and on his advice, Oberon and Titania appoint Puck to be the child’s mentor before departing. Despite his apparent protests indicating otherwise, I think Puck got what he really wanted (to stay with the Xanatoses), just as this was all clearly a manipulative ploy by Titania to push her daughter to her limit – what a family huh? Almost like a skulk of foxes…

Speaking of funny coincidences, I went on a lot last week about how Oberon is visually inspired by Marvel’s Malekith, and it is funny he supersizes himself like Malekith did years later during the ending of Thor: The Dark World: however, Renard’s strategy of forming an energy web to contain him more closely resembles the Nova Corps’ tactic in Guardians of the Galaxy – some indication of a collective unconscious, or proof Marvel Studios are really big Gargoyles fans too? Who knows. I suppose the only intentional resemblance here is when Oberon’s struck with an iron harpoon, greatly draining him to the point he looks like a prune version of Count Orlock from Nosferatu, which is further evidence the show’s staff secretly wanted their big bad to be a vampire, not an elf. 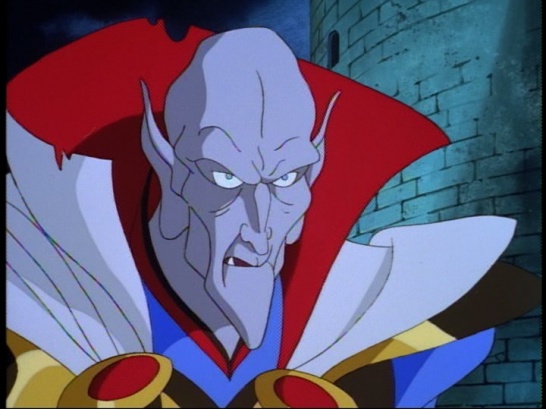 Bonus thoughts:
– I expected Oberon’s throne room to look grander: it looks like the inside of a McMansion.
– Weirdly, the glamour Oberon casts to move around in the mortal realm doesn’t conceal his pointy ears.
– Xanatos wears the Iron Clan armor throughout the story but it seems to have no effect on Oberon, it’s too prominent to have been a miscolored Steel Clan armor though.

Next week: things return to normal, or as normal as this show can ever be in “Vendettas” and “Turf.”