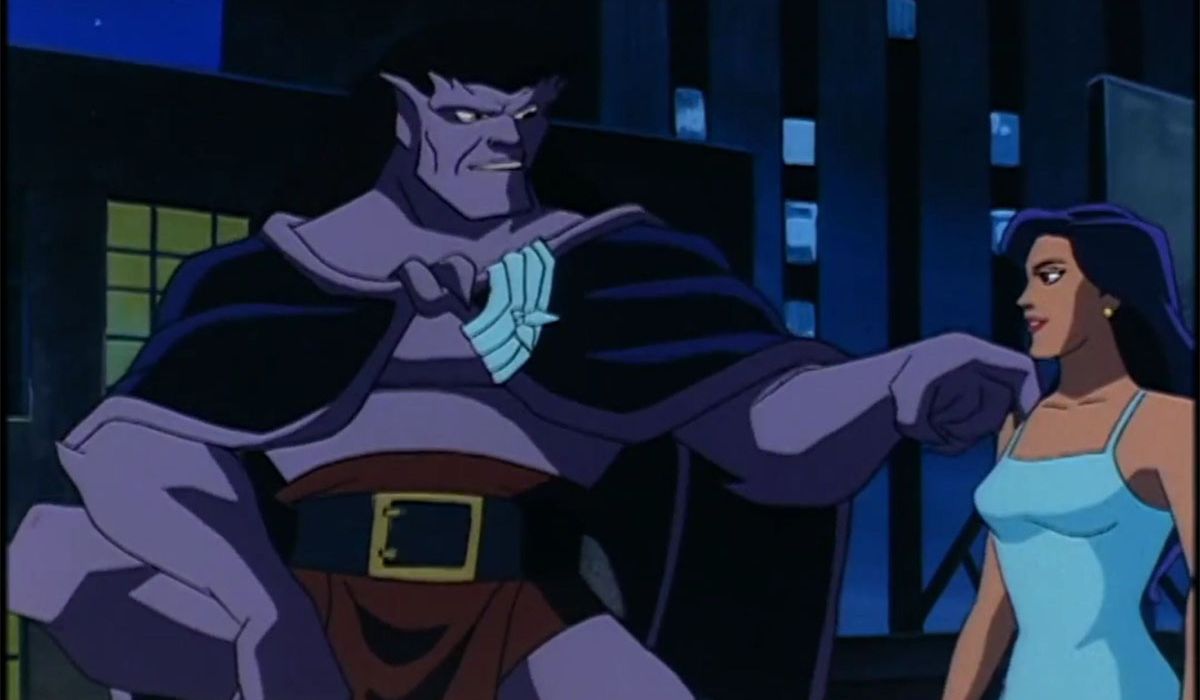 Welcome back to the Summer TV Binge of Disney’s Gargoyles. This week we begin looking at the revamped and truncated third season, Gargoyles: The Goliath Chronicles, which is largely considered non-canon because of the departure of creator Greg Weisman, save for the first episode, “The Journey” (aired September 7, 1996), which Weisman wrote. In this episode, Goliath’s visit to Elisa’s department is rudely interrupted by a hate group (alas, the more things change, the more they stay the same).

The new intro for the show was simply ugly and haphazard:

Gone is Goliath’s gorgeous and moody opening narration, which rather defeats the purpose of moving the show to Saturday mornings on ABC, as it always reiterated the premise to any newcomers. Instead, we get a random montage centered around a CG depiction of Xanatos’s Eyrie, and Carl Johnson’s stirring and poignant theme gets a focus tested remix. It’s ultimately trying too hard to be the ‘90s Spider-Man series intro, with its badly dated music and graphics.

As for Goliath’s narration, he now starts each episode with a monologue that’s trying to set up the theme of each story (hence the new name of the series). Unfortunately, his reflections are trite and monotonous: Keith David sounds utterly bored reading them, coming across like Harrison Ford in Blade Runner (and I like the narration in Blade Runner, as tacked on as it is!).

We see the clan all settling back in Castle Wyvern: Goliath, Brooklyn and Hudson are still wary of whether Xanatos has truly changed his colors or not, which brings a nice dose of realism. However, Hudson clearly enjoys being reunited with his personal sofa and TV, while Lexington has grown fond of baby Alexander and begun to reconcile with his mother, and Broadway and Angela are falling further in love as they explore the library. (These moments really made me want to hang out with this extended family in their cosy castle.) The last one also leads to a rather profound scene where Brooklyn becomes heartbroken when he discovers Angela has chosen Broadway over him, which is juxtaposed with a TV debate questioning the gargoyles’ humanity: I wish the show had reached this pointed level of social commentary much earlier.

Speaking of social commentary, the episode introduces the Quarrymen, an anti-gargoyle hate group armed with electroshock hammers. They’re basically the love child of the Ku Klux Klan and pagan-obsessed Nazis, with their pointed cloaks, and their Thor-esque weapons, which are incorporated into their ‘Q’ sigil. We see them through the eyes of Vinnie Grigori, the hapless unemployed goon who pied Goliath in “Vendettas,” giving us someone sympathetic enough that his turning against the Quarrymen in the climax doesn’t feel too contrived – it’s an all too relevant reminder a lot of young men fall into these hate groups because they were depressed and lonely. One of the best parts of seeing the Quarrymen meet is how diverse they are: like real racists, they’re not all poor, ugly uneducated men. 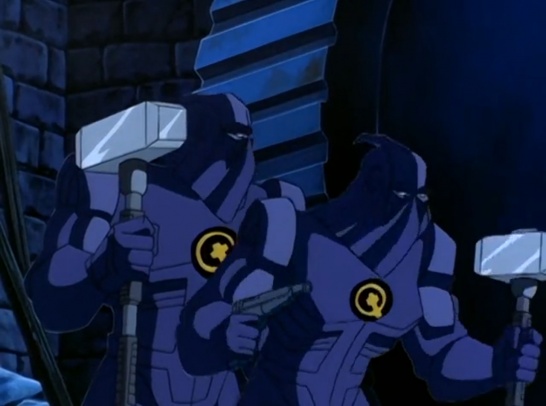 Fascinatingly, Vinnie’s turn is prompted by the Quarrymen’s leader wanting to execute Elisa for the “crime” of loving a gargoyle. It’s a fascinating metaphor for “miscegenation,” which has fueled the murders of black men for decades. (It is not lost on me that Goliath is voiced by Keith David, a black man, or that Elisa is a mixed race woman.) If Vinnie had been a member of the Quarrymen for longer, his worldview would’ve been warped to the point of going along his commander’s order: the only thing xenophobes hate more than those they terrorize are the people like them who haven’t given into hate.

4. The Woman in Blue

Elisa wears a blue dress for much of this episode, presumably to look nice for Goliath, which leads to the King Kong-esque visual of her being carried across the city by him as the Quarrymen pursue. While Elisa is perfectly entitled to wear whatever she likes, it is rather randomly formal looking, like she planned to invite him out for dinner, which would’ve been hard even without the Quarrymen on the hunts! Imagine the accusations of conflict of interest from her superiors that would follow, or her family getting harassed, and bigots (Quarrymen or not) finding out their locations: the ’90s were not a progressive time folks!

5. Definitely Not as Much Love and Attention

The Goliath Chronicles was produced in-house by Canadian company Nelvana, as opposed to the various studios across the Pacific that worked with Walt Disney Television Animation on the first two seasons. As a result, there’s a strong sense of a crew new to the show trying to familiarize themselves with mixed results: for example, Goliath is depicted as moving in stone form as he awakens at dusk, in stark contrast to the rest of the series. Likewise, they can’t seem to agree if the Quarrymen’s hoods are made of cloth or stiff helmets. The biggest error has to be at the end when Goliath, whose wing has been shot, rendering him unable to glide back to the Eyrie, yet it’s apparently recovered enough after defeating the Quarrymen that he is able to do so. 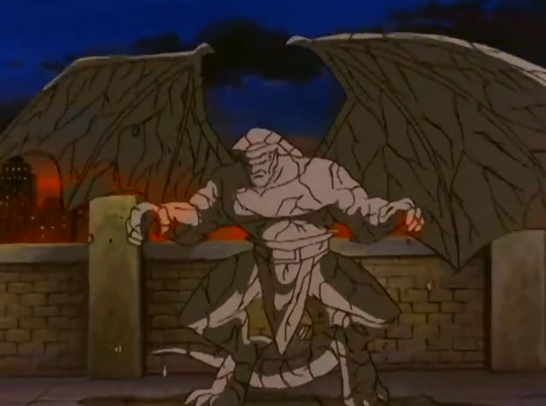 He's standing before this.

Maybe the show was already cancelled and Nelvana were just doing the thankless job of ending it – all I know there’s a lot of weirdness going on. Similarly, during the TV debate scenes, John Rhys-Davies reprises his role as MacBeth (now posing as Medieval scholar Lennox MacDuff), but his opponent, Margot, the yuppie lawyer voiced by Marina Sirtis, is now played by Tress MacNeille. It’s not a huge deal, but the devil is in the details and it’s telling they couldn’t have Sirtis record her dialogue in advance for this episode as well as Demona’s next appearance.

Bonus thoughts:
– Surprised the Clock Tower’s not under reconstruction or cordoned off by the police.
– Xanatos ignores a phone call from the Illuminati, the first mention we’ve had of them since “Revelations.”
– In a nice touch of grit, the bloodstain on the part of Goliath’s wing where he’s shot is very visible.

Well, that’s it for the last canonical episode: see you all next week as we officially venture into Gargoyles‘ apocrypha with spotlights on the younger heroes.