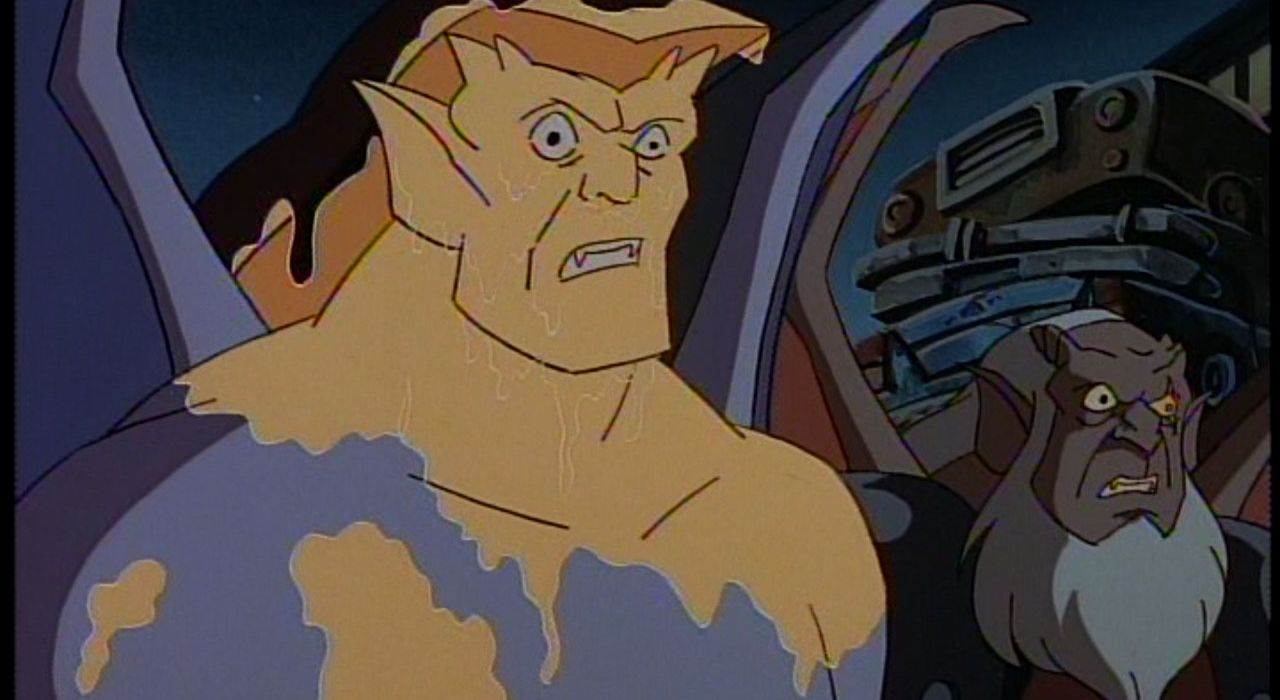 “Vendettas” and “Turf,” the first two episodes of Disney’s Gargoyles after the ‘World Tour’ arc (aired May 1 and May 6, 1996), respectively see Goliath and Elisa settling back into their old routine of patrolling New York, and confronting some old enemies, some of whom they met during their time away.

“Vendettas” follows on “Shadows of the Past,” where it was shown the ghost of Hakon (the Viking who sacked Castle Wyvern) was still present. It’s revealed Pack member Wolf (also voiced by Clancy Brown) is a descendant of Hakon, and after recovering his axe from Scotland, the two have now joined forces to take their revenge on Goliath. This episode is basically a very long fight sequence between Wolf, and Goliath and Hudson, which doesn’t overstay its welcome by continuously finding ways to stay fresh by constantly switching up locations, and by having Hakon possess his descendant, Hudson himself, and then just fighting them via his axe – the image of his weapon floating is so hokey, but awesome. 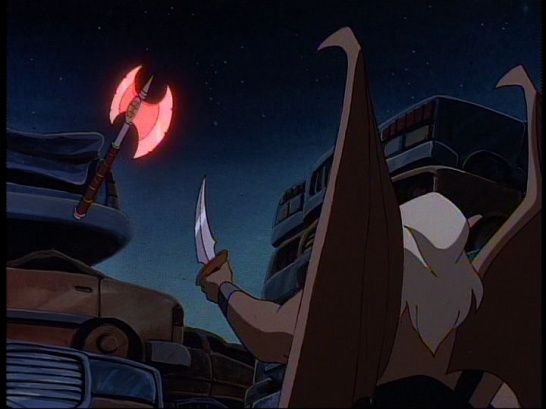 So kind of Hakon to glow so you know which Clancy Brown is talking.

That’s not a joke, that literally happens. The subplot of “Vendetta” concerns Vinnie Grigori, a low-level goon who we learn had his life ruined by the gargoyles during the events of “Awakening” and “The Cage.” He buys himself a missile launcher that he drags around town in a sports bag, explaining to the viewer his backstory by way of muttering to himself about his misfortunes, interspersed with flashbacks that combine new and reused footage (which is admittedly jarring as a result of the different animation studios). He keeps tracking down Goliath, ramping up the tension, only to keep slipping on a banana peel and lose his aim (I exaggerate, but that’s basically what happens each time). He finally comes face-to-face with Goliath and Hudson after they’ve defeated Wolf and destroyed the axe, and launches his projectile – which turns out to be the aforementioned pie. 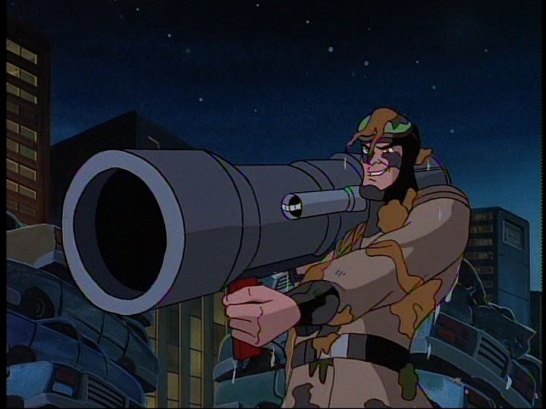 'You took everything from me.' 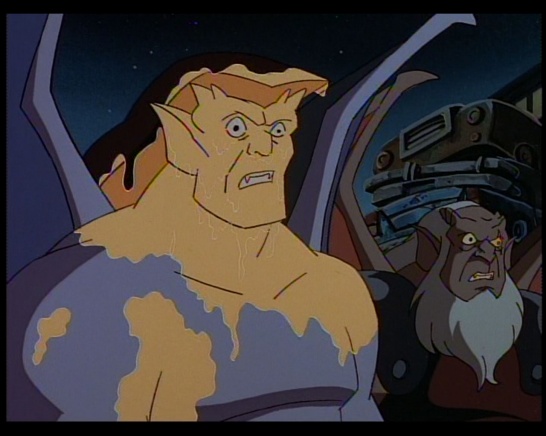 Turns out Vinnie wasn’t that mad at the gargoyles. To top it all off, he waltzes away whistling the show’s theme song, a fourth wall break if there ever was one. I love that the writers decided, after combining two relatively weak premises, that it’d be best to conclude with a gag – it’s certainly more memorable than the usual final shot of our heroes turning to stone as the Sun rises. Oh, and did I mention Hudson helps himself to that pie, informs us it’s “banana cream,” and closes the episode with an iris shot? Bless this mess.

“Turf” sees a gang war break out when Tomas Brod (the Czech gangster from “Golem,” also voiced by Clancy Brown) comes to New York, and tries to seize the territory of Elisa’s incarcertated nemesis, Tony Dracon. Elisa goes undercover in Brod’s gang as the blonde Salli, which is amusing since that’s the name of her voice actor. I suppose there might’ve been a time jump but I was surprised to see Elisa already doing something as sensitive as undercover work after her long absence: did she demand this job first thing because she’d encountered Brod before? Where did her boss think she’d been? I would’ve really loved this in the episode, instead of just brainstorming it for fan fiction here. 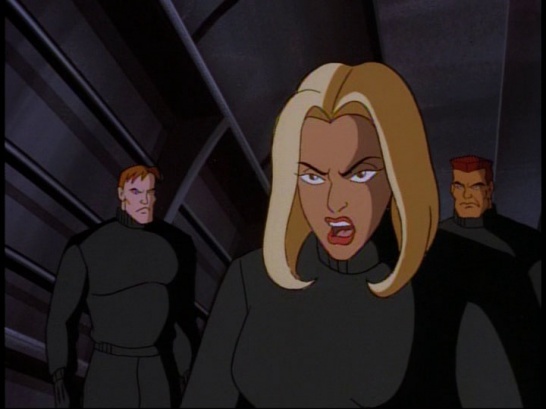 Don't worry kids, I wouldn't have recognized Elisa with this animation studio either.

The episode primarily focuses instead of Angela learning the ropes with Brooklyn, Broadway and Lex, who are reduced to bragging, bickering and even fighting each other in an attempt to win her admiration. I must say, it was very ’90s of Elisa to tell her to take this borderline harassment on the nose, but then towards the climax she finally takes charge and tell the boys to knock it off, after their behavior almost gets them killed, thankfully refuting that bad advice. (Oh yes, and she tells them to stop calling her Angie. She’s right, it’s a bad nickname, makes you sound like rice pudding.)

“Turf” concludes with Dracon having his privacy privileges revoked and being forced to share his cell with Brod: the two start a fight just as the credits roll. It’s funny, but it is weird a cartoon is already telling kids to expect prison to be violent places that offer no hope of rehabilitation for inmates: it’s even stranger given the show is full of villains (like MacBeth, the Xanatoses and Dingo) who’ve gone on redemptive journeys. I hope I don’t sound too sanctimonious, so I’ll just say I think it would’ve been equally funny to see all the crooks in a group therapy session, just scowling and gritting their teeth at each other.

Bonus thoughts:
– What happened to the old Scottish policeman whose car Wolf steals? Did he die of exposure? Did he hitch a lift? I need answers!
– Hudson yells at Hakon to “get an afterlife,” a pun so dreadful it’s incredible (worthy of Arnie, even).
– Would Hudson’s dagger really block Hakon’s axe though?
– Angela uses her tail to knock over one of Brod’s men, which is nothing special but it’s so rarely used to spice up the action I can’t help but notice it.

Join us next week for a look back at “The Reckoning” and “Possession.”