Welcome back to our recap of Fox’s hit TV series, Gotham. As the one person who watches this show, it’s been decided that I should be the one to chronicle its existence so history could never forget. Kind of like The Giver, I think. As always, I refuse to look up anything that happened in the previous two seasons of Gotham because I only started watching two weeks ago. Also, look out for spoilers from here on out.

Last time on Gotham, Fish Mooney turned into Poison Ivy and escaped with Hugo Strange, actual Poison Ivy turned into a full grown woman in a messed up Big scenario, The Penguin is set to Make Gotham Great Again, Bruce Wayne talked down the Court of Owls, and his weird little clone walked into Wayne Manor. 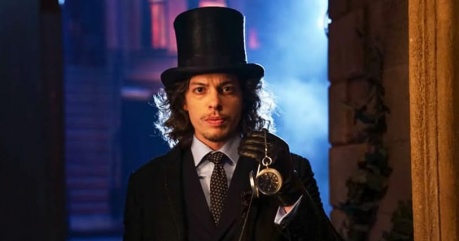 “Look Into My Eyes” features the debut of The Mad Hatter. Jervis Tetch is a stage magician who, like most of the characters on Gotham is already way too much. He looks like the bastard child of Tim Curry and Adam Driver and acts like a high schooler playing the Mad Hatter in a high school production of Alice in Wonderland. As his first act of malice (in wonderland), Tetch hypnotizes one of the men in his audience to let him live in his house then kill himself and his wife. That murder part is really disappointing because for a few minutes I was looking for a season long arc where this poor woman has to tolerate her husband letting the hypnotist they saw at one show live in their home. Just a full season of You, Me and Depree with an Alice in Wonderland fetishist.

Tetch is in Gotham so he can find his sister Alice (ugh) and so he enlists the help of bounty hunter Jim Gordon to find her. I surmised that Jim had quit the GCPD at this point in the show but yo he’s actually just a bounty hunter for all the monsters from Indian Hill? Is Gotham… is Gotham good? If that’s not enough to make Jim my favorite character, Tetch shows up at Jim’s apartment with some tea and Gordon just pours the glass of whiskey he was already drinking into it. At like 9AM. I can’t wait for the season where they put this man in a robot bat suit.

Because Gotham can’t let a good thing be, there was a lot of time spent this episode relating to Gordon and his personal life. Boo. After his one night stand with Valeria Vale (where he told her to “shut up for a second” before kissing her), Vale is like “well that was fun lol bye” leaving Gordon all emo. Then his ex Leslie Tompkins (somehow played by Moneca Baccarin) returns to Gotham and tells Jim she’s engaged. Overall, these two scenes actually go by pretty briskly until we meet the show’s actual creepiest character. Creepier than the dude named Jervis.

When Gordon’s investigating Alice he goes to the bar where she was last seen working. It’s been burned to the ground and because the owners think Gordon’s in on it they beat him up. Jim goes to the hospital to get stitches and the doctor just keeps talking to him. And talking. Not because he’s a good doctor or anything but because he’s Leslie’s new fiancee and he wanted Gordon to know that while he was sewing the back of his head shut. I can’t tell if that’s a power move or a serial killer red flag. Later that night, the doctor (Mario) is jealous that Tompkins didn’t tell Gordon his name. Before asking whether or not she gave Gordon got his fanart, Mario’s dad shows up and it’s Carmine Falcone. So this is either going to go two ways. Either there’s some weird arc where Leslie gets wrapped up witth the Falcone rime family or Gotham experiences a Long Halloween. Mario goes on a holiday inspired year long rampage only to get caught and inspire his brother Alberto to do the same thing fifteen years later. I wouldn’t put that past Gotham. 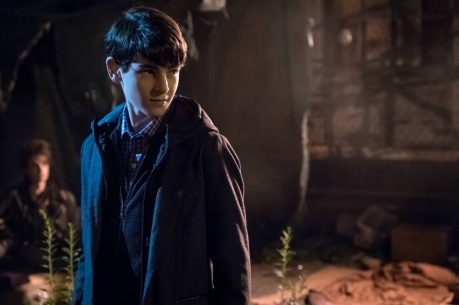 While Gordon’s having his wounds caressed, Alice is living in an apartment with Peter Parker’s land-lord form Spider-Man 2. He yells at her for not having her rent but says they could make an arrangement. Because Gotham is an uncomfortable show, the landlord forces a kiss on Alice. Little does he know Alice has Rogue’s powers from X-Men and he collapses into a zombie thing. I don’t know. Gordon shows up to the apartment and asks what any of this could possibly be but she just sets the body on fire and bails.

Gordon confronts Jervis at his ex-fiancee’s nightclub because Alice told Jim he was evil. Tetch is like “yeah, not wrong there” and tries to hypnotize Gordon to jump off the roof, only to be shot at by Alice. He runs off, leaving Alice to get cuffed by Gordon. Oh also, before all of this, Tetch hypnotized Gordon’s ex Sarah to kiss him because this show is all about forced first base apparently.

Over to the B-plot side of things, Bruce Wayne still has a clone living in his manor. The clone says it’s name is some factory number Indian Hill gave him, something stupid like Eleven, and in a sparring session with Alfred it turns out Eleven is really proficient in fighting. He was also screamed at in a tank by Matthew Modine once. Dude had a hard month of life.

Selina Kyle comes over and asks Bruce to help her find Ivy but he can’t because he kind of has a clone himself in the next room over. Selina storms off but Eleven overhears all of this, cuts his hair in the middle of the night, and steals Alfred’s car so he can pick up Selina and take her to dinner. Forget what I said about Irish Tea Gordon, Eleven is my favorite character on Gotham, at least until he turns out to be Clayface.

5. Would You Richard Kindly

In order to secure a campaign manager, Peewee Herman ass Oswald Cobblepot waddles over to Arkham and bribes/forces the warden to release The Riddler. This leads to an actually great scene where The Riddler asking if he really is clear for all of his crimes, causing him to speed round through the names of everyone he’s murdered while the warden’s like “nah you good.” I can’t say that I’m excited for another show to become about politics during this election cycle, but I am very excited to see The Penguin and The Riddler, who look Cillian Murphy’s sons, hang out together.

Next week on Gotham: I didn’t actually look at the teaser trailer for next week. Who knows!