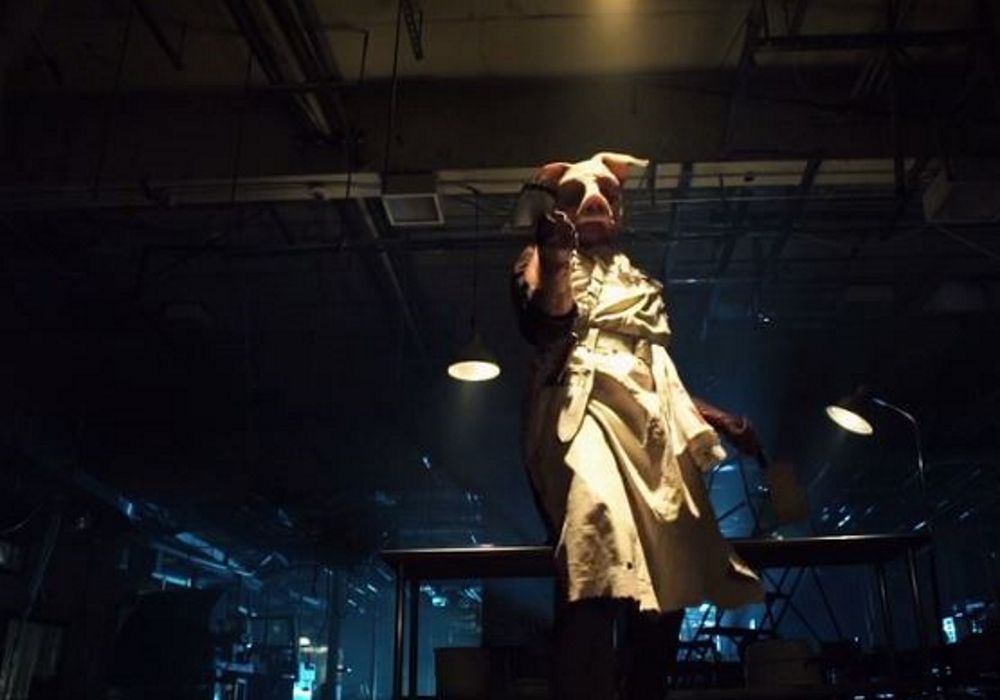 Have I ever seen Gotham before? I caught half of an episode on TV once- I think it involved Azrael and dismemberment. Oh, and they used to film it outside my apartment in New York, so I definitely saw Jim Gordon stomping angrily through a parking lot a few times. Does that make me qualified to share my thoughts on an episode of the show? You bet! I know as much about the continuity on Gotham as the writers seem to know about the “Batman” comics. Let the madness begin!

1. Money to make his brain more smarter
Let’s start with the silliest story of this Gotham hour (and that is saying something)- there is something wrong with the Riddler’s brain, so he’s using Solomon Grundy to win fights to earn money to pay Dr. Thompkins to fix him even though she evidently hates him. First of all, this makes no sense, though I guess if your plot device is that someone’s brain doesn’t work, his plan doesn’t have to be a good one. Second of all, Solomon Grundy is evidently a fat zombie Lou Ferigno? His makeup was laughable, and his acting even worse. On the plus side, the extras in all of these scenes were amazing. They were indeed, so extra.

The most frustrating part of this story was Morena Baccarin. Not because she was bad- far from it- but because she deserves a better script. The story was stupid, the dialogue lousy, and her motivation was a mess involving a free clinic she uses to treat sick peasants from the Great Depression. Baccarin is talented, charismatic, and hilarious, just go re-watch Deadpool if you need a reminder. This story should by all rights end with her killing the Riddler, but you know it won’t.

2. Lipstick on a pig
On the other hand, Prof Pyg was amazing. A-maz-ing! I had no confidence that he could be translated well to the screen, but he was easily the best part of the episode, from his introduction to his escape. Oink Oink indeed! When I saw Michael Cerveris’s name in the credits, I cringed, worrying that he would be misused, but he was easily the best performance of the episode, and possibly on TV this year. He dances, he snorts, he dramatically eats sausage, I love him. If this show is just a series of perfectly cast actors doing amazing performances as Batman’s rogue gallery, I am one hundred percent in.

3. Stirring the Cobblepot
The moment we transitioned from Bullock telling Jim not to “go stirring the pot” to a waitress saying “enjoy your lunch Mr. Cobblepot,” I could feel that this script needed an edit. That’s too many pots. Despite an incredible performance from Robin Lord Taylor, the Penguin story was sort of lame. It was full of cheap looking lighting and a boring misunderstanding. Penguin is in love with Sofia Falcone, but thinks she’s in love with the mayor, but really she loves orphanages? Snore. Also, Victor Zsasz is there, but with no scars, and a camera instead of a knife? What is even happening here? On the plus side, Penguin has a chicken wing bucket! He just sits in a leather throne, eating chicken wings and throwing the bones into an ornate spittoon. New life goals.

4. The cop prince of crime
I’m sure I can’t be the first person to have pointed this out, but Jim Gordon is the villain of this show right? From watching this episode, I would say Gotham is about a corrupt and hypocritical detective terrorizing charming takes on Batman villains. Gordon menaces everyone he sees, torturing some of them, and then at the end of the episode, pontificates to his partner Harvey Bullock about ending corruption. What the hell Jim?

Also, the New York City of it all was extremely distracting. When the investigation takes Jim and Bullock to the Courthouse District, it didn’t look anything like Gotham City. I’ve used that subway station. I kept waiting for the Brooklyn Bridge to appear in the background. It made the cartoonishness of the costumes and interior sets all the more jarring in comparison.

5. Slashed throats and slash fiction
Still, Bullock and Jim were fun to watch even if police procedure in Gotham makes no sense to me. It seems to be a combination of intimidation, torture, and patiently asking criminals to share their meticulously kept record, something they have no problem doing. Investigation is a tried and true television plot device, and it was watchable here, but the episode really came together when the detectives came face-to-snout with Pyg. I was even a bit shocked when Pyg slashed Bullock’s throat and left him bleeding out, which the show casually breezed through. I also see the appeal of the Jim and Bullock partnership. They’re totally in love right? A quick glance at AO3 shows 147 instances of Jim/Harvey fan fics, so I’m gonna say yes. Amazing. This show is terrible. I love it.