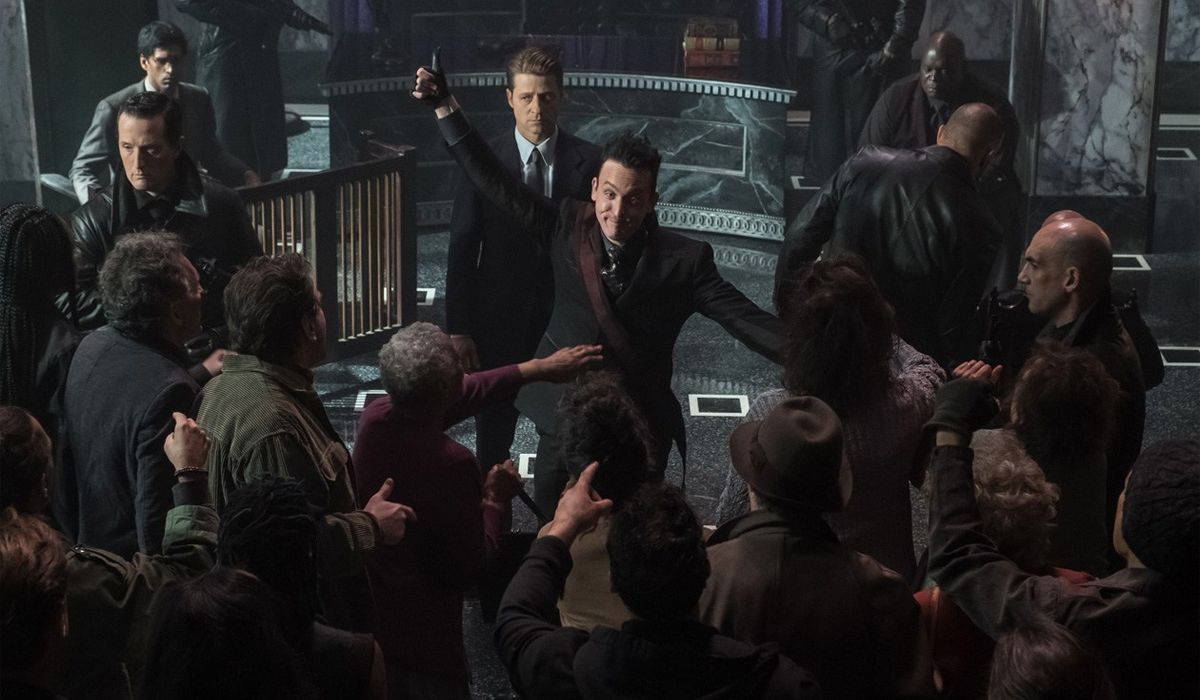 Welcome back to our weekly column on Fox’s Gotham, where the staff at Multiversity Comics take turns to offer their take on last night’s episode, despite never having watched the show. It was your friendly neighborhood news manager’s turn to be today’s sucker, despite giving up on the show halfway through season 1. (I would’ve really loved a proper adaptation of Brubaker, Rucka and Lark’s “Gotham Central,” but it ain’t it chief.) I’m delaying watching Brooklyn Nine-Nine and The Good Place for this, so let’s crack on surveying the “Ruin” of Gotham:

Gotta say, the recap really did its work, getting me up to speed on Catwoman seeking revenge on the Joker Jeremiah, Barbara’s feud with Penguin, or the destruction of the refugee camp at the end of last week. I’ll admit, I do know a little of what’s been going on in the show, it’s kinda unavoidable in my line of work, so backstories like Gordon’s girlfriend Barbara going nuts and becoming a supervillain weren’t surprising to me. I think the biggest surprise to me was Barbara and Riddler’s new hair, which were striking for different reasons.

When I realized Bruce was on Selina’s tail, trying to stop her killing Jeremiah, I audibly groaned, realizing it’s Teen Batman and Catwoman and Joker, like some young adult pitch too twee even for DC Ink/Zoom. Let’s talk about this Joker, since I’ve never seen him before: he looks more like a mime than a clown, with his black-and-white coat, hat, hair, and lipstick, and his voice channels Heath Ledger as well as… a Southern landowner? He’s more Gothic than Tim Burton’s own take. We also Harley Quinn wearing an American flag for some reason (I know it’s a nod to her comic book costume’s color scheme, but it still looks like she’s wearing the flag).

It’s a Batman show without Batman, so justice vs. vengeance played a big theme, with the Penguin creating a kangaroo court (just like The Dark Knight Rises) to blame and bump off Zsasz for last week’s bombing, as well as Bruce trying to save Selina from herself. (Yawn.) I gotta admit, I laughed when I saw them bring out the guillotine for Zsasz, given how much people joke on Twitter about bringing them back for the one percent, as well Zsasz’s muffled last words.

Turns out our emo-haired Riddler blew up the camp, and spends the whole episode working out he did it, ‘cos he has amnesia or a split personality or something. I feel like his whole storyline was meant to be dark comic relief, but I thought it came across as stupid rather than funny, although there was a mildly amusing moment of physical comedy where he tries to steal the GCPD file from Lucius (who I didn’t know was on the show). The scene where he remembers his act of terrorism after finding the only witness – an old disabled woman with a big window – was very silly, and her hitting him with a falcon model only added to that, as if her bonking him was causing him to remember. (His throwing her out the window was entirely predictable and silly looking too.)

After all that press for Shane West joining the show, Gotham’s Reckoning still hasn’t appeared on the show? Given this is the only time I’ll watch Gotham, it’s a shame, I guess. This is the fourth episode of a 12-part season, seems like they’re really going to rush his transformation.

Bonus thoughts:
– I think the show’s missed a big opportunity not having the younger Barbara Gordon around.
– Why does Gordon’s suit and hair still look so immaculate?
– Robin Lord Taylor’s performance as Penguin is still the best thing about this show.

God, can’t believe I put off Star Trek: Discovery for this. Will I be tuning in next week to find out whether Jeremiah’s still alive or what happens to Jim and Barbara’s own Batman/Catwoman romance? I’ll let you work that out.