This week was a real mixed bag for everybody’s favorite hard-drinking super-powered resting-bitch-face detective and I’m here to talk about it. As always, beware of spoilers and here are five thoughts on “A.K.A. Camera Friendly.”

This show needs cohesion. Costa’s story swerves much of this episode off track and only serves to further comment on the decline of this show. The reveal of Costa and his partner trying to adopt a baby certainly could have been a positive moment but it seems forced. The conflict here lacks depth or believability as well. Costa’s partner asks if it will always be “like this” in a very trite-trope moment. It will be, obviously.

Jess tells Trish she can’t lose her as she has become used to having a partner and implies she likes it. What? Why? Since when? If there are two things that Jess has been against in both the entire series and this most current season it is that Jess does not view herself as a hero and does not want a partner. This moment contradicts the latter only to be followed by a counter to the former.

Jess has already been calling herself a hero in this season–which I have stated feels out of character–but all of a sudden when confronted with the terms she rebuffs it, noting she is “not a superhero.” What the hell does this woman want to be? Does she know? Do the showrunners know?

Scott Buck glares at me from the corner and I can feel his gaze like heat blasts from Cyclops on me.

For a show that tried to make a commentary on PTSD earlier in the season, Jessica Jones sure has dropped all of that by this episode. The lock and door were plot devices in earlier episodes to note the trauma felt after her being victimized by Sallinger. Now, seemingly a week or two later she’s perfectly fine again with leaving her door open and inviting potential strangers in. It’s Malcolm who enters but Jesus Christ that could have been anybody, right?

Okay, from the look on his face I think I need to say something positive about this show. He’s making me very uncomfortable as he does his dance of a knife around his hand.

Dorothy is great, isn’t she? She’s a lovably hateable character and her excitement at the prospect of monetizing her vigilante daughter is infectious. You should not like this character, and yet you are compelled to. Dorothy is a shining light in season 3 of Jessica Jones.

They fucking killed her. In a moment intended to be shocking but coming across more as a groan-inducing Dexter flashback, Trish finds Dorothy’s body, seemingly murdered by Sallinger. This just feels cheap, the explanation to how he targets her is convoluted.

Buck is really gripping the handle of that knife as he stares me down. I worry that the Dexter reference upset him. 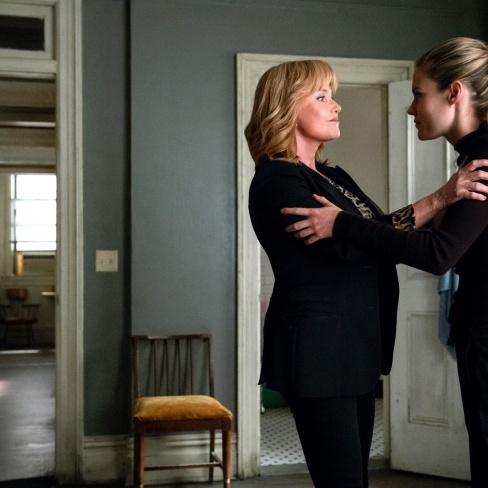 R.I.P. Dorothy. We'll remember you by offering this Marino Wool Wrap at 30% off. It's a real steal.

“A.K.A. Camera Friendly” ends on a cliffhanger. A tacked-on moment sees Trish potentially slicing Sallinger’s throat with a knife. Say…that knife looks familiar. My mind wants to glance over at the corner but I stay focused on this monitor, this review.

Anyway, we end on Jess yelling for Trish to stop and a couple of frames leaving Sallinger’s fate ambiguous. It’s all very unfulfilling as it yells at you to “TUNE IN NEXT WEEK!”

“They’d better tune in next week, for your sake” Scott Buck says from his chair in the corner of my apartment. “Wouldn’t want to miss the show.”

A chill runs down my spine as I remember I’ll be back next week to review “A.K.A. I Did Something Today” as our review of the third season of Jessica Jones continues. Please, help me.