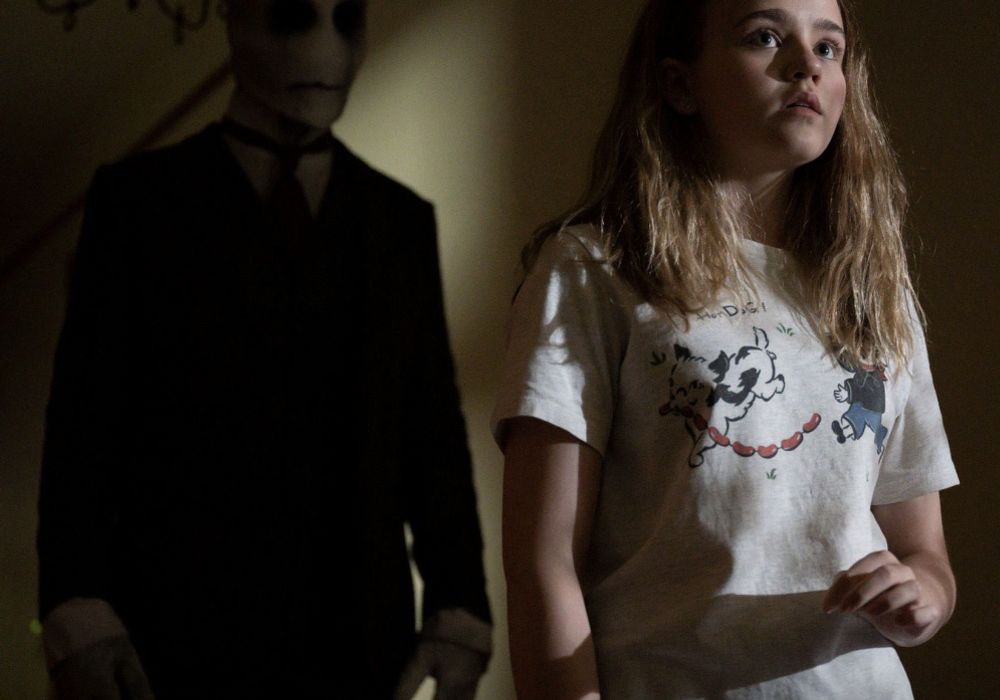 Olivia and her family move into an old house after the parents’s divorce, only to be confronted by a sinister looking creature.

For a split second I was disappointed that this episode would avoid talking about exactly what was at the core of it. Leaving the metaphors to speak louder than the issues at hand, but was pleasantly surprised when it took charge of what it was handling. The episode pretends like it is going to be uncomfortable broaching the subject by having Olivia’s mom, Brook skirt around the word divorce. Thankfully, like Olivia, the episode marches full ahead into this territory. Major themes of this episode are also depression and anxiety, things that most people are only just now coming to terms with and starting to talk to others about. As the monster becomes a clear stand-in for such negative feelings the episode becomes about facing your personal demons. Like the fears and anxieties that Olivia is facing, this monster will never fully go away, so she has to learn to deal with it in the ways that work for her, otherwise it will control her for the rest of her life.

Of course the main characters move into the creepy old house in the neighborhood. Every kid in town believes it to be haunted, and we know from the cold open that a girl was attacked there by the monster years before. As the story progresses we learn that the house was built by Olivia’s grandparents, but then who was the girl we saw get killed(?) at the start of the episode? The house is a fun old set that feels like it’s been thrown into the kid’s version of Insidious or Sinister. Old turn of the century homes will always up the spook factor.

3. The Believer Next Door

Ah, the other trope that is always welcome in teen supernatural horror: the kid who believes in, or knows all about the scary stuff going on in the house you just moved into. This time he is literally living next door, and like the quirky best friend of any family sitcom, he is ready to to lend some help, even if you haven’t asked for it. Graham is the kid who is both a social outsider, and somehow, fairly popular with the bulk of the student body. You all know them, you may even be that person. Hes a paranormal fanatic and more than willing to look into the monster haunting Olivia. Played with campy gust by Elisha Henig, probably most well-known as Julian on season 2 of The Sinner and Ben on Alex, Inc., his career so far has had him moving between comedic and dark roles from the start. Playing Graham allows him to be quippy while horrific things are happening. Though, notably, nothing is happening to him. His acting (or the writing) is a little imbalanced throughout, but he definitely understands the role.

The titular monster is a Slenderman type, going for that Creepypasta style creature that has been the on-going rage with teen for the last 10-15 years. These type of monsters do well in their online beginnings, but rarely translate well to film or television. While this monster is taking from that sort of aesthetic, there is no web-based origin here so just take it at face value. It’s a tall guy with a misshapen head wearing a suit. Suits on monsters are always creepy. It works decently well, especially when kept in the shadows or the gray-blue daydream state that Olivia occasionally sees it in. And because this isn’t a violent story, the episode doesn’t really have to pull any punches, skipping out on anything when the looming dread is all it needs. The monster just walking around and appearing at really inopportune times works best.

5. Connecting With Your Parent

One of the smaller, but fully realized ideas here is connecting with your parent, and in this case, daughter to mother. What could be seen as an allegory for past trauma, mental illness, or just similar thoughts and feelings, Olivia finally discovers that the monster is something that haunted her mother as a child too. And Brook was in fact, the teen who was attacked in the opening scene. Talking out their experiences leads mother and daughter to figure out they’ve dealt with the same monster and can figure out how to deal with him in the future together. It’s a little on the nose, but is really well done for, again, a kids show.

One of the stronger outings of the season, with only a few cringe-y kid acting moments. The horror and slight humor blend well enough and bring out a smart allegory for kids who are bit too young for things like The Babadook. 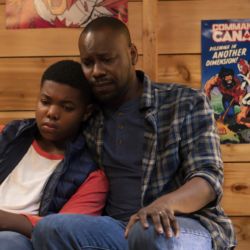 Sam ends up in an alternate reality that allows him to say goodbye to his father who recently passed away. It’s a strong ending to the season, and while plays with wonky sci-fi ideas, works the best on an emotional level.Some Spoilers Ahead1. Flipped OutStill dealing with the death of his father, Sam and his […] 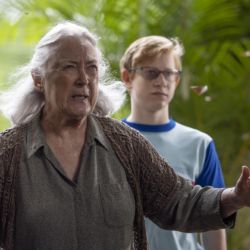 Five Thoughts Just Beyond’s “Standing Up For Yourself”

The perfect small town has one major defect – a horrible bully named Trevor Larkin.Some Spoilers Ahead1. The American NightmareOn the surface, Larkinville is the idyllic Small Town America setting, but we know that something will be off about it – aside from the dangerous level of 1950s nostalgia built into it. From jump, as […] 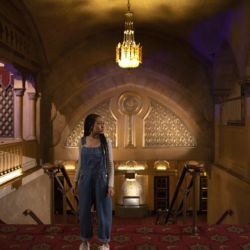 Five Thoughts on Just Beyond’s “We’ve Got Spirits, Yes We Do”

A depressed teenage girl is locked in an old haunted theater over night where she learns some key lessons from some actors who never left.Some Spoilers Ahead1. Unable To Come Out Of Your ShellLexi Underwood plays Elle, a self-made introvert whose old lost friendship has made her disappear into herself. She’s given up on everything […]