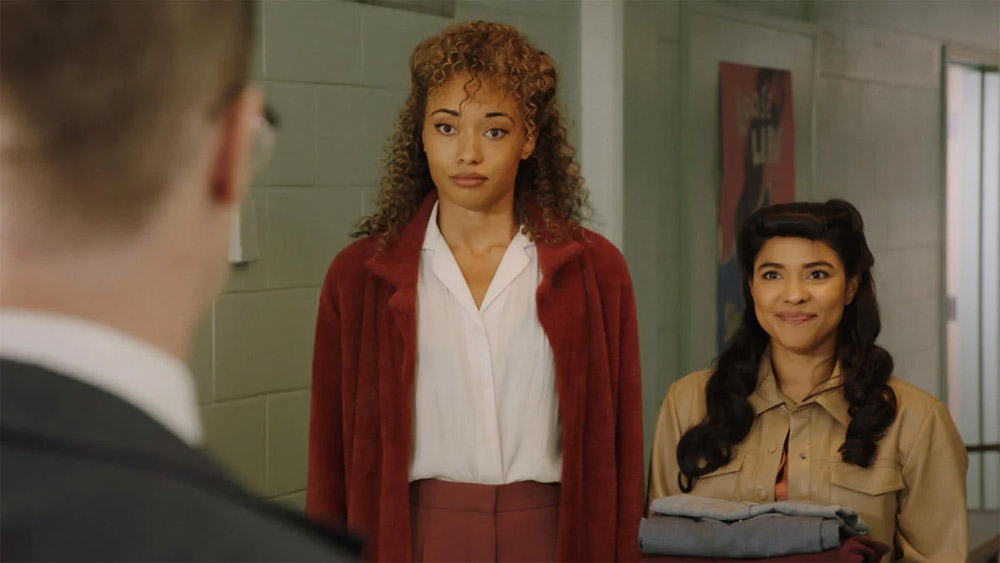 This week on Legends of Tomorrow, the gang found themselves outside a military factory in 1943, which Sara, Ava, Gideon, Astra and Spooner set about smuggling parts from to repair Gwyn’s time machine. Meanwhile, Behrad and Zari 2.0 babysat their stowaway, Bishop, to teach Nate the ways of Persian hospitality, so that their ancestors would all welcome him into the totem.

The factory’s manager, Mr. Staples (Jason Gray-Stanford) assigns Ava and Sara to the factory floor, and chooses Gideon to be a new secretary, but takes one look at Astra and Spooner, and disdainfully assigns both women of color to janitorial. Spooner tries to maintain a positive outlook, but Astra eventually has enough of Staples’s racism, and accidentally petrifies him. The gang makes the best out of this bad situation by having her fill in for him at the office desk, but after making some steady improvements to the factory, she decides to integrate the white and Black staff, causing half the white workforce to walk out in protest.

Abby (Kimleigh Smith), the oldest Black woman at the factory, decides to confront Staples and learns the truth: she takes the frozen man in her stride, and concentrates on explaining why she felt Astra went too far. It reminded me a lot of contemporary politics, with the older Black woman arguing you can’t force progress, while Astra demanded to know why she has to continue to put up with racial abuse. Legends of Tomorrow is a very goofy show, but it manages to raise topics I’ve never thought about, like the integration of women workers during WW2, and that is a remarkable achievement.

2. Our Co-Captains Should’ve Realized This

I feel Sara and Ava ought to have realized what would happen, having had to step in when Zari was subjected to racism a few weeks ago in 1925. Naturally, one would hope that wouldn’t be the case where everyone’s working together to fight the Axis almost two decades later, but it’s still another two decades before the Civil Rights Act, and there are still no limits to racist depravity even today; that said, maybe that was the point, I didn’t expect this episode to explore how white women are the main beneficiaries of feminism, so I guess Sara wouldn’t have realized how Astra and Spooner might feel before seeing them with the cleaning trolley — for all her alien DNA, she’s still all too human.

3. Even Behrad Has His Limits

Bishop is a man child, who constantly asks Nate and the Tarazi siblings for food and other things while in Constantine’s pocket dimension, including being allowed to play on Zari’s phone. Behrad takes the opportunity to be a gracious host, and demonstrate the values of taarof to Nate, but he admits to Astra he’s finding Bishop to be a nuisance. Behrad’s always been a pillar of calm in a chaotic group, and it’s good he admits even he finds it difficult sometimes, as well as to see his budding romance with Astra move forward slightly.

After Astra gives him the confidence to be more honest, Behrad admits to Bishop he resents him, leading the techo bro to acknowledge he has been a pest, but that he has also been working to make amends by constructing a helmet for Gideon, which will allow her to communicate with and direct Gwyn’s time machine to precise points in history. Behrad forgives him, although Zari cannot, because he incorporated her phone into the device (men.)

When Staples regains consciousness, he’s outraged to see Black women building the commissioned airplane of the day, but is soon put in his place by Astra’s ace up her sleeve: none other than a visiting First Lady Eleanor Roosevelt (Christine Willes), who’s delighted by the integrated staff, and the amazing work they’ve pulled off together. I wondered if this was another magic trick from Astra, but considering how much of a rookiee she is, it turned out it really was Roosevelt, who returns to Washington to call for greater integration across all war factories, two years ahead of schedule. It was a weakly foreshadowed appearance (if it even was foreshadowed), but still a cool nod to Roosevelt’s progressive beliefs, which I didn’t know about. (Legends — it’s educational!)

The ripple in the timeline causes Evil Gideon’s Waverider to show up, now with armed, armored goons in tow. Bishop sacrifices himself to buy time for the Legends, something I was naturally shocked and saddened by, as his storyline here really made me look forward to him becoming a new member of the team. After everyone else escapes in Gwyn’s time machine, Evil Gideon’s troops take off their helmets and reveal themselves to be clones of the Legends — how’s that of a double whammy for the midseason finale? The Evil Legends: they maintain the timeline.

– This episode’s main theme was foreshadowed by the factory being named McDougle Jemison, a tip of the hat to Mae Jemison, the first Black woman in space, and Sharon Caples McDougle, her spacesuit technician.

– The helmet Bishop makes also includes a Speak & Spell toy, a clear nod to E.T., as well as kitchen tongs for antenna, which are so weird that I’m probably gonna think about them for the rest of the day.

– I get why there’s no alcohol in the totem, what about phones though? Must be the lack of reception.

– Of course the Zari who was in love with Constantine recognizes Gwyn’s resemblance to him, although the others still don’t see it (Nate thinks he looks like Rip, to which I say: please stop drinking.)

Alright, that’s it from Legends for 2021, but we’ll be back next week for the holiday special spin-off, Beebo Saves Christmas! Oh, and happy Thanksgiving! 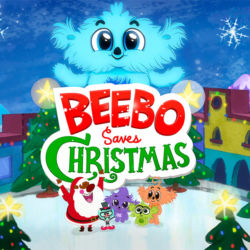 Four years after he was introduced as the hottest toy of 1992, Legends of Tomorrow‘s Beebo (voiced by Ben Diskin) finally has his own spin-off! In this animated hour-long holiday special, the off-brand Care Bear sets off with his friends to the North Pole after discovering something’s amiss with Santa (Ernie Hudson), and learns he’s […] 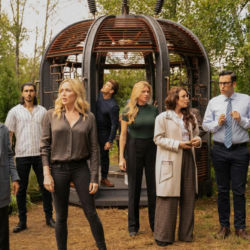 Welcome back to Legends of Tomorrow folks: first, a special thanks to Elias for covering last week’s episode, which saw the gang reunite and participate in Dr. Gwyn Davies’s time travel experiment in 1925. This week saw the group stranded in what they believed to be a prehistoric forest, with Zari and Behrad working to […] 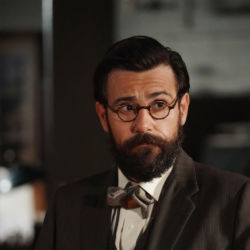 Chris tried to send back a Chris-bot to make sure he could cover this week’s episode but it arrived just a little too late, and in a few too many pieces. Don’t worry, if I’m reading the timeline right, the real Chris should be back next week, ready to accompany the Legends to...well, we mustn’t get ahead of ourselves.